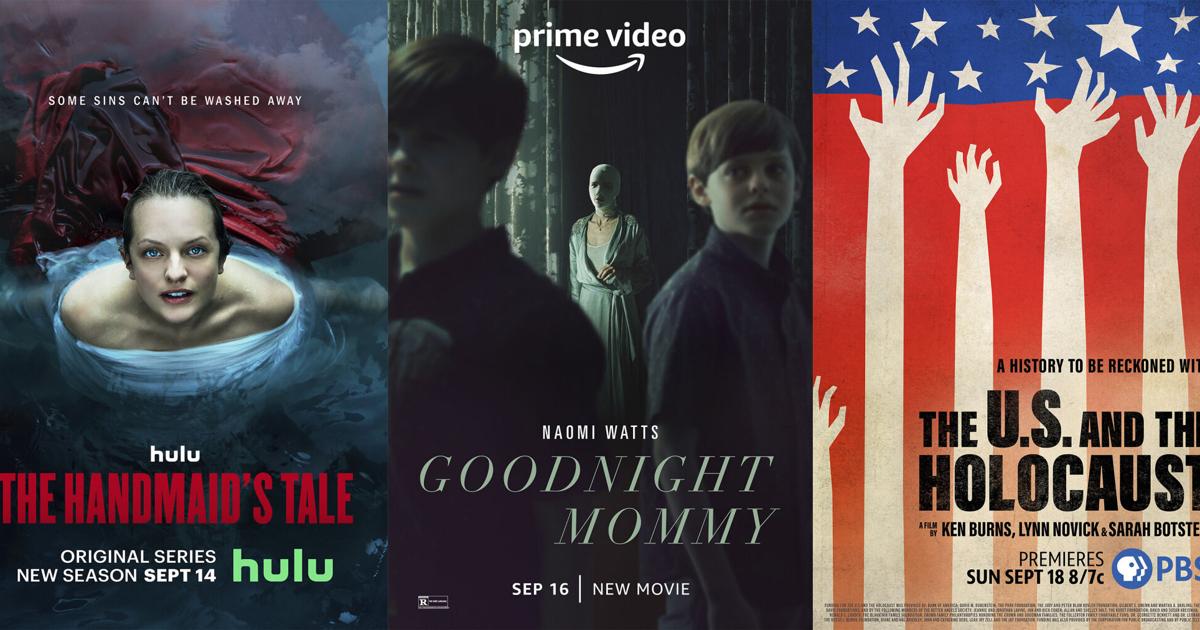 — Twin brothers go to their mother’s house for a stay but find something is off about her in “Goodnight Mommy,” an English language remake of a cult Austrian horror from 2014. Naomi Watts plays the mother, an actress whose face is wrapped in bandages — presumably recovering from plastic surgery. She’s also quite on edge and suspiciously cruel and the boys, Elias (Cameron Crovetti) and Lucas (Nicholas Crovetti) start worrying that it is not, in fact, their mother, but an imposter. Directed by Matt Sobel, “Goodnight Mommy” arrives on Prime Video on Friday, Sept. 16.

— A year after “Official Competition” premiered to raves at the 78th Venice Film Festival, it’s finally coming to a streaming service, AMC+, on Friday, Sept. 16. The sharp satire skewering the movie business (and the art world in general) stars Penélope Cruz and Antonio Banderas as two egomaniacs who a billionaire hires to make a film together. By all accounts the Spanish language film, directed by Mariano Cohn and Gaston Duprat, is deliriously fun and funny and a great showcase for its leads Cruz and Banderas.

— Over on Disney+, the original documentary “Mija” tells the story of Doris Muñoz and Jacks Haupt, the daughters of Mexican immigrants who are trying to make their way in the music business in the U.S. It’s the directorial debut of Isabel Castro, also a Mexican American, and will be available to watch on Friday, Sept. 16. In the Variety review out of the Sundance Film Festival, critic Lisa Kennedy wrote that, “Castro’s debut feature deals with heartache and vulnerability but also shimmers with joy and genuine insight.”

— After night must come light, right? Little Big Town’s album “Mr. Sun” drops Friday, Sept. 16, the follow-up to the band’s last offering, “Nightfall.” Band member Karen Fairchild says: “‘Mr. Sun’ is focused on better days ahead, the value of friendships and family; it touches on heartbreak and letting go, but it’s full of sunshine and joy.” The 16-song album — with a member of the band writing or co-writing 13 of them — includes “Rich Man,” the hazy, addictive “All Summer” and “Hell Yeah.”

— Singer-songwriter Michelle Branch will release her new album “The Trouble with Fever” despite facing her own personal troubles. The album, out Friday, Sept. 16, was co-produced with her husband, Patrick Carney, drummer for The Black Keys. Branch was arrested last month for allegedly slapping Carney, but prosecutors decided not to press charges. The album’s first single, “I’m A Man,” is a bluesy protest song that tackles such topics as women’s rights, toxic masculinity, reproductive rights and sexual harassment.

— Marcus Mumford releases his first solo album on Friday, Sept. 16, but he’s tapped plenty of friends for help: Brandi Carlile, Phoebe Bridgers, Clairo, Monica Martin and Julia Michaels. The album, “(self-titled),” has produced the quiet yet powerful “Cannibal” (with a Steven Spielberg-directed video) and the superb “Grace,” a strummy cathartic tune with the lyrics: “I hear there’s healing just around this corner.” Blake Mills produced the album.

— Jessie Reyez had some bad luck when she released her debut album, “Before Love Came To Kill Us.” It came out in late March 2020, along with the pandemic, which wiped out her buzz. This week, she’s hoping for better luck with “YESSIE,” led by the spiteful kiss-off single “Mutual Friend,” with the line: “This heartbreak morphed into hate.” The Colombian-Canadian artist has had an exciting year, touring with Billie Eilish and performing at the 2022 Coachella music festival.

— “The Handmaid’s Tale” returns with high stakes for June (Elisabeth Moss) and the future of Gilead, the totalitarian society that she and others have risked their lives to fight. The Emmy-winning series, adapted from Margaret Atwood’s novel of the same name, has become a touchstone for women’s rights advocates. In the fifth season that begins Wednesday with two episodes, June is dealing with the consequences of a killing, while Serena (Yvonne Strahovski), the woman she widowed, seeks her own path to power. Hulu announced the drama will end with season six.

— “The U.S. and the Holocaust” examines Nazi Germany’s Jewish genocide in the context of American society and the nation’s response. The three-part documentary looks at the 20th-century rise of Adolph Hitler and the Nazi party amid racism and antisemitism elsewhere in the world, including in the United States. Directed and produced by Ken Burns, Lynn Novick and Sarah Botstein and written by Geoffrey Ward, the six-hour docuseries airs Sunday through Tuesday, Sept. 18 to 20, on PBS and will be available on PBS.org. Peter Coyote narrates.

— Looking for a break in your day? “The Jennifer Hudson Show” and “Sherri,” with comedian-actor Sherri Shepherd, are here to oblige, with both shows debuting Monday. Actor-singer and “American Idol” alum Hudson will welcome first-week guests including Simon Cowell, Magic Johnson and Hannah Waddingham. Among Shepherd’s debut week guests: Ricki Lake, Robin Thicke and Derek Hough. The hosts are looking to fill the void left by Ellen DeGeneres’ and Wendy Williams’ now-ended shows, with Kelly Clarkson and Drew Barrymore among the returning competition.