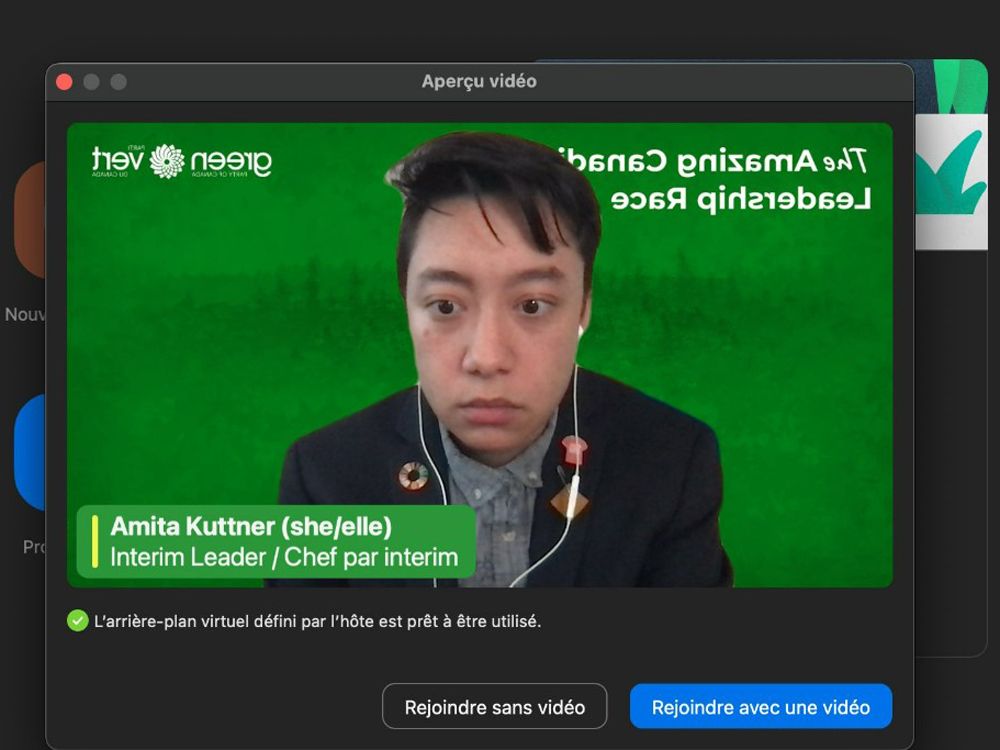 Just one year after its partial meltdown during the 2021 federal election, the Green Party of Canada is once again in crisis over an incident of “misgendering.”

It all started at a Sept. 3 media event in Vancouver kicking off the party’s leadership contest. In a Zoom appearance, Interim Leader Amita Kuttner was identified using a caption bearing the pronouns “she/elle.”

Kuttner, 32, identifies as non-binary and pansexual (attracted to all genders and orientations), and goes by they/them pronouns. In a subsequent statement, Kuttner slammed the “misgendering,” saying the incident “made me feel hurt and isolated” and hinted that it was “reflective of a larger pattern of behaviours that a few in the party are perpetuating.”

The statement added, “in moments like these I wonder — how can I ensure other people’s safety if I can’t even ensure my own?”

Kuttner’s statement was followed by a joint letter — signed by leadership candidates as well as the party’s two MPs, Elizabeth May and Mike Morrice — calling for a “restorative process” to root out “harassment” within the Greens. “The September 3 incident was but the latest in a number of similar behavioural patterns that Dr. Kuttner has faced throughout their tenure,” it read.

Green Party President Lorraine Rekmans was the first to resign. A volunteer who estimated that she has worked 40-hour weeks for the past year on party business, Rekmans implied in a Saturday resignation letter that leadership candidates were subtly blaming her for the “she/elle” mistake.

Although the joint letter explicitly cleared Rekmans of responsibility for the incident, Rekmans wrote that she is “constantly distracted by claims of harm.”

“I was surprised that the contestants would use (the Sept. 3 media event) to attack the Party they were running to lead,” she wrote, adding, “I find that some in GPC, wish to cling to the image of a political party that is the same as all the other political parties in Canada, fuelled by money, and controlled by people who wield power.”

Krystal Brooks, the Ontario representative to the party’s federal council, also resigned. In a lengthy Sunday Facebook post, Brooks criticized the party for continuing its leadership race even while candidates were calling for an investigation into “systemic” harm within the party. The contest should have been postponed “pending the investigation,” wrote Brooks.

Brooks then attached emails showing that Morrice and May had apparently threatened to resign and sit as independents if the leadership contest was delayed. May, notably, is running as a candidate in that contest.

“I … recognize how deep the manipulation went prior to this event by Interim Leader, Dr. Amita Kuttner, although I’m not certain if you were aware that you were doing this or if you too were being manipulated,” wrote Brooks, adding “I have lost all faith in Caucus and those who they choose to hide behind.”

Notably, both resignees are Indigenous, with Rekmans having been celebrated only 12 months ago as “the first Indigenous woman to be president of a national political party in Canada.”

1. You know what… I have been verbally abused, harassed, tokenized, victimized, racialized, marginalized, treated like an incompetent child, treated as less than for simply daring to say I survived sex trafficking, told to go back to my reserve and so much more during my time in

Amidst all this, Kuttner launched a fundraiser last Wednesday intending to spite Jonathan Kay, an editor with Quillette and occasional National Post columnist. Kay had tweeted that the misgendering controversy sounded “exactly like satire,” prompting Kuttner to ask supporters to donate $68,000 to counter Kay’s “hate.”

The whole misgendering fracas is occurring as the party struggles to recover from its disastrous performance in the 2021 federal election.

Several months before the election, then-leader Annamie Paul had gone public with accusations that she had been repeatedly subjected to “anti-Semitic” and “racist” attacks from within the party (Paul is Jewish and Black).

Paul then limited her campaign almost exclusively to her personal bid for a seat in Toronto Centre. She would ultimately win just 3,921 votes, putting her in a distant fourth place behind the NDP, the Conservatives and the victorious Liberal candidate (who won 23,000 votes).

Paul would later deem her leadership as the “worst period of my life.”

Although the Green Party retained both of its MPs, its share of the popular vote dropped off a cliff in the 2021 vote. In 2019, under May, 1.2 million Canadians had cast Green ballots. Under Paul, that was down to just 400,000 — the party’s worst showing since 2000.