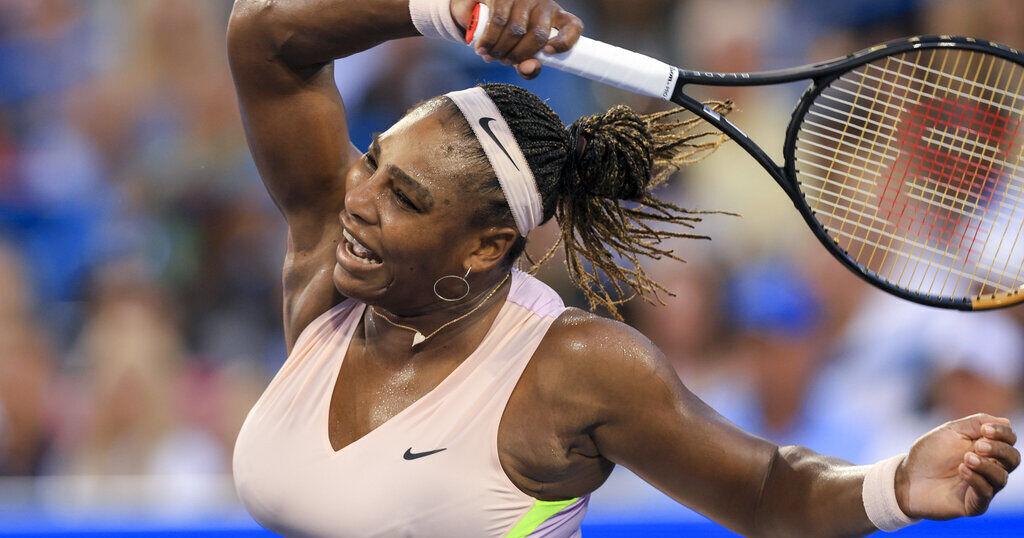 Here’s a look at top trending news across the nation for today, Aug. 29:

They came to the U.S. Open on Monday from far and wide for Serena — no last name required, befitting someone as much an icon as superstar athlete — eager to see her play or, if not lucky enough to hold the right ticket, hoping for an autograph, a glance at her practicing or merely the chance to breathe the same Flushing Meadows air as her.

As thousands waited in lines to enter the tournament grounds hours before her match, then headed to smaller courts for earlier action or simply around, waiting and wading in the palpable excitement, no one present could know for sure how many more opportunities there will be for any of it. Folks were there to watch, or just think about watching, Serena Williams swing her racket the way she did to 23 Grand Slam singles titles, more than any other person in the professional era of tennis that began in 1968, because she has said she is ready to move on from her playing days.

An employee who was killed in a shooting at a Safeway supermarket in Bend, Oregon, attacked the gunman in the produce section and tried to disarm him, likely preventing more deaths, authorities said Monday.

The 66-year-old employee, identified as Donald Ray Surrett Jr., of Bend, was hailed as a hero by police at a news conference. Surrett and a customer, 84-year-old Glenn Edward Bennett, also of Bend, were killed Sunday evening. Two others were injured.

“Mr. Surrett engaged with the shooter, attempted to disarm him and may very well have prevented further deaths. Mr. Surrett acted heroically turning this terrible event,” Bend Police spokeswoman Sheila Miller said at a news conference as she struggled against tears.

Today in history: In 1958, pop superstar Michael Jackson was born in Gary, Indiana.

Minaj performed a medley of her career’s biggest hits from “Roman’s Revenge,” “Chun-Li,” “Moment 4 Life,” “Beez in the Trap,” “Anaconda” and “Super Bass.” After her set, the rapper accepted the show’s Video Vanguard award, which MTV has said she’s receiving for her artistry, barrier-breaking hip-hop and status as a global superstar. The honor is named after Michael Jackson.

During her acceptance speech, Minaj paid tribute to other music icons such as Jackson, Whitney Houston and Lil Wayne. She spoke about the importance of mental health.

NASA has scrubbed the launch of its new moon rocket on a no-crew test flight after a cascade of last-minute problems, including unexplained trouble related to an engine. The next launch attempt won’t be until Friday at the earliest. The 322-foot rocket was set to lift off Monday morning from Florida on its first flight, a mission to propel an empty capsule into orbit around the moon. The shakedown flight will be a big step forward in America’s quest to put astronauts back on the moon for the first time since the end of the Apollo program 50 years ago.

A U.N. nuclear watchdog team has set off on an urgent mission to safeguard the endangered Russian-occupied Zaporizhzhia atomic power plant which has been at the heart of fighting in Ukraine. The world hopes this long-awaited trip will help avoid a nuclear catastrophe. The trip is to a country where the world’s worst nuclear accident, at Chernobyl in 1986, sent radiation across the region, shocked the world and intensified a global push away from nuclear energy. The stakes of the U.N. mission are high because of fighting at and near the plant, and because the plant is occupied by the Russian military. Elsewhere, new fighting was reported in southern Ukraine, with Ukrainian forces attacking a Russian-occupied city and neighboring regions.

Authorities in Detroit are releasing more details about three random killings on city streets over roughly two hours. Mayor Mike Duggan says the shooter may have been emboldened Sunday when he didn’t encounter police after the first shooting. The mayor says no one called 911. The shootings began Sunday at 4:45 a.m. Three people were killed over roughly two hours and a fourth person was injured but survived. A 19-year-old is in custody. Police say he may have a mental illness. The man was arrested following a tip from someone who is close to him. The victims included a woman at a bus stop who was planning to move soon to a suburb.

Texas Democratic gubernatorial nominee Beto O’Rourke says he has cleared his campaign schedule after receiving treatment at a San Antonio hospital for an unspecified bacterial infection. In a statement tweeted Sunday by his campaign, O’Rourke says he sought treatment at Methodist Hospital in San Antonio after he began to feel ill Friday. He said intravenous antibiotic infusions improved his symptoms. The El Paso Democrat says he is resting at home based on his doctors’ recommendation but will return soon to the campaign trail. O’Rourke continues to trail Republican Gov. Greg Abbott in opinion polls.

Taylor Swift took home the top prize at the 2022 MTV Video Music Awards before she closed out the show with a surprisingly big announcement: Her new album. The pop star said Sunday night that her new album will be released Oct. 21. She revealed on social media that her 10th studio album will be called “Midnights.” Her announcement came came at the end of her acceptance speech where she praised the other women in the category – which included Doja Cat and Olivia Rodrigo. Jack Harlow and Nicki Minaj both pulled triple duty at the award: both musicians performed, won awards and served as the show’s hosts alongside LL Cool J.

The horror film “The Invitation” needed just $7 million to finish at the top of the weakest weekend of the summer at the North American box office. That’s according to studio estimates Sunday. The Sony film stars “Game of Thrones” actor Nathalie Emmanuel as a young woman who discovers dark secrets at her family home in the English countryside. Sony also had the No. 2 movie with the Brad Pitt vehicle “Bullet Train,” which brought in an estimated $5.6 million in its fourth week, putting its domestic total past $78 million. Universal’s “Beast,” starring Idris Elba, finished third with $4.9 million.

Hawaii got back-to-back homers from Kekoa Payanal and Kama Angell in the first inning, sparking a 13-3 win in just four innings Sunday over Curacao in the championship of the Little League World Series. The LLWS title is Hawaii’s fourth. It won in 2018 and this same Honolulu team finished third last year, when COVID-19 travel restrictions prevented international teams from participating.  Hawaii starter Jaron Lancaster was dominant once again as he threw all four innings, while only allowing three runs, three hits and striking out 10 Curacao hitters.

Rory McIlroy is the FedEx Cup champion for the third time. He stormed from a record-tying six shots behind to win the Tour Championship and capture the $18 million prize. Scottie Scheffler never trailed all week until the 70th hole. He built the six-shot lead Sunday morning with four birdies in six holes to complete the third round. But he was never on his game and made only one birdie in a round of 73. McIlroy shot a 66. He says winning felt even more significant because of the tumultuous year caused by Saudi-funded LIV Golf.

Serena Williams is set to play the first night match in Arthur Ashe Stadium when the U.S. Open begins Monday. The 23-time Grand Slam singles champion missed last year’s tournament and has indicated this could be her final appearance before retirement. The top half of the men’s bracket and bottom half of the women’s bracket will play Monday. Defending men’s champion and No. 1 seed Daniil Medvedev leads off the action in Ashe against American Stefan Kozlov, with 18-year-old American teenager Coco Gauff scheduled to follow in the afternoon. Past U.S. Open champions Dominic Thiem, Andy Murray, Stan Wawrinka and Bianca Andreescu are also in action.

Austin Dillon avoided a massive wreck in the rain to win at Daytona International Speedway and snag a playoff spot in the Cup Series’ regular-season finale. Dillon passed Austin Cindric for the lead with three laps to go after a 3 hour, 20 minute red flag for inclement weather. It was an aggressive move that capped a drama-filled race. Martin Truex Jr. was the biggest loser. Truex looked like he would secure the final postseason berth when the skies opened up, but he faded once the race restarted and allowed Ryan Blaney to make up ground in a wild points scramble.