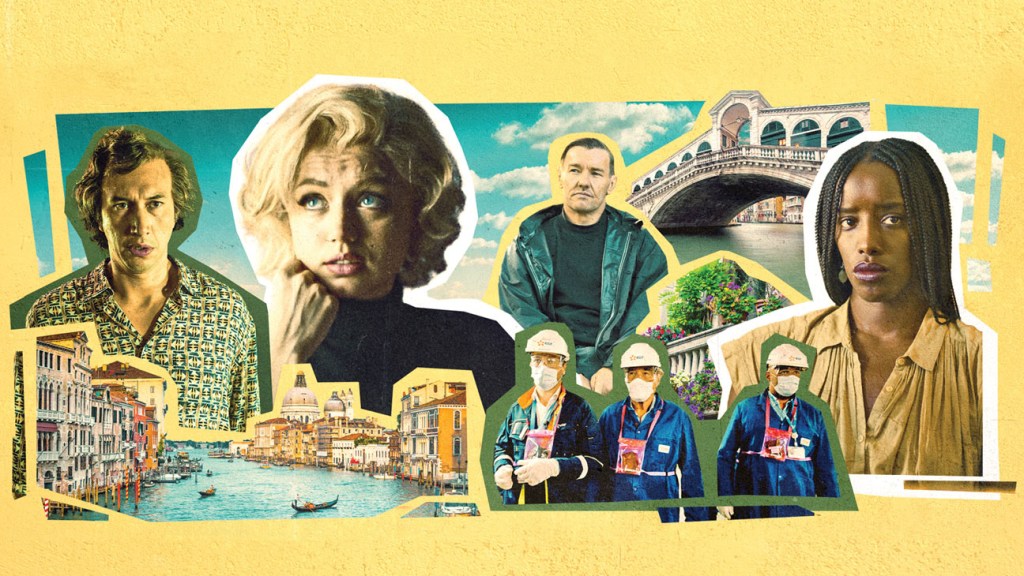 For the 79th Venice Film Festival, artistic director Alberto Barbera has put together one of the most well-curated lineups of his career. Both studios and streamers are well represented.

But while all those titles may be spoken for, Venice’s unofficial market will offer a handful of films, both art house and genre titles, that are still up for grabs, with enough hooks and star power to pull in international and domestic buyers.

All the Beauty and the Bloodshed

DIRECTOR Laura Poitras
THE BUZZ The Oscar-winning doc director (Citizenfour) turns her lens on photographer Nan Goldin, whose artist-led campaign against the Sackler family pharmaceutical dynasty helped expose America’s opioid crisis and revealed how the family profited off the addictions and deaths of half a million Americans. Poitras’ name — and the subject matter — should have bespoke buyers scrambling to get a look at the film.
SALES Participant/Submarine

STARS Walton Goggins, Zooey Deschanel, Casey Affleck
DIRECTOR Bill Pohlad
THE BUZZ True stories and music documentaries are hot sellers at the moment, making a strong case for this feature, Pohlad’s follow-up to the sleeper hit Love & Mercy, a pop music biopic on Brian Wilson. This time, Pohlad takes on a lesser-known musical tale: the story of brothers Donnie and Joe Emerson (Goggins and Affleck), who threw their entire savings into the production of the groundbreaking 1979 debut Dreamin’ Wild, an album that was rediscovered during the late 2000s.
SALES CAA Media Finance

STARS Satoshi Tsumabuki, Sakura Ando, Masataka Kubota
DIRECTOR Kei Ishikawa
THE BUZZ Based on the novel by Japanese author Keiichiro Hirano, A Man follows a troubled lawyer (Tsumabuki) who is drawn into a web of mystery when a former client asks him to investigate the shady past of her deceased husband. The film reunites Ishikawa with Tsumabuki, star of his well-received Venice Orizzonti entry Traces of Sin (2016), while also featuring a soulful Ando, star of Hirokazu Koreeda’s Palme d’Or winner, Shoplifters.
SALES The Match Factory, Shochiku (for Asia)

DIRECTOR Niccolò Falsetti
THE BUZZ A low-key title that could win over art house buyers willing to take a bet on a debut director, this comedy-tinged, partly autobiographical story is set in the sleepy Tuscan city of Grosseto and tells the story of a passionate trio of Italian punk rockers who are forced to battle their provincial surroundings in their quest to organize a gig for one of their favorite American bands.
SALES Fandango

STARS Joel Edgerton, Sigourney Weaver
DIRECTOR Paul Schrader
THE BUZZ Just one year after his slow-burn stunner The Card Counter, Schrader is back in Venice with his 22nd directorial feature, Master Gardener, starring Edgerton, Weaver and Quintessa Swindell (In Treatment). Conforming to Schrader’s self-pioneered “man in a room” genre (think Taxi Driver, Light Sleeper or The Card Counter), the film follows Edgerton as Narvel Roth, the meticulous horticulturist of Gracewood Gardens, a historic estate owned by wealthy dowager Mrs. Haverhill (Weaver). When Mrs. Haverhill demands that Roth take on her wayward great-niece Maya as a new apprentice, chaos enters his spartan existence, unlocking dark secrets from a buried violent past. Venice is also bestowing Schrader with a Golden Lion for lifetime achievement this year.
SALES Hanway

DIRECTOR Oliver Stone
THE BUZZ Stone may have hit pause on his narrative-feature career, but the always provocative filmmaker continues to churn out docs that still find an audience among specialty buyers. His latest is an impassioned argument in favor of nuclear energy as the solution to the climate crisis. Streamers, as well as doc distributors, could warm to it.
SALES The Gersh Agency

STARS Kayije Kagame, Guslagie Malanga
DIRECTOR Alice Diop
THE BUZZ The feature debut of acclaimed documentarian Diop, whose nonfiction We won the Encounters award at last year’s Berlin International Film Festival, is a courtroom drama about a young novelist forced to confront her personal traumas while following the trial of a young mother accused of infanticide. It could fit nicely into the schedules of art house distributors.
SALES Wild Bunch International

This story first appeared in the Aug. 17 issue of The Hollywood Reporter magazine. Click here to subscribe.