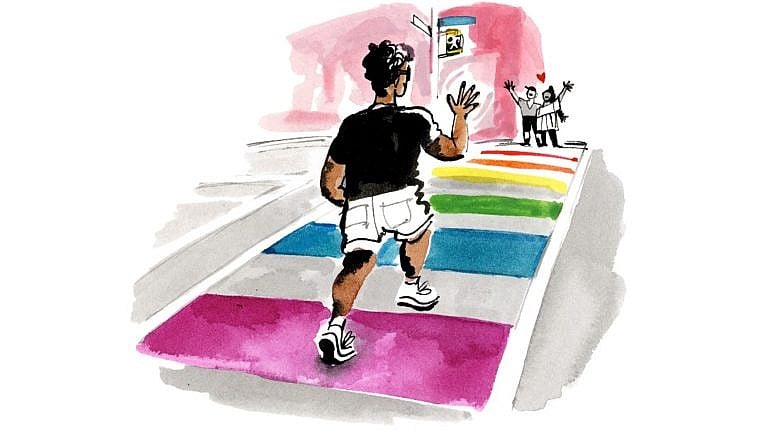 “I love living in a place where I can be free about my sexuality without being judged.”

I was born in Khiyarat Dannun, a small village in Syria. I have 11 brothers and sisters; I’m number six. As a kid, I loved watching my mother cook and helping my sisters do their hair and makeup. My mom thought I should toughen up, because cooking and doing makeup weren’t things men did. My father worked in the United Arab Emirates as a math teacher. He lived there during the school year, so we didn’t see him very often.

In Grade 7, I was sent to an all-boys Islamic boarding school in Damascus. By that point, I knew I was different, but I didn’t know I was gay. I didn’t even understand what it meant to be gay. After I graduated, I studied Arabic literature at Damascus University and began to discover my sexuality. At the new internet cafés, I could search online to find other people in the queer community. There were secret spots and underground parties where we could meet other gay men. We had to do everything in secret. In Syria, any form of “abnormal” sex is illegal, including homosexuality. I hid my sexuality from my family, too. I worried they’d disown me.

In 2014, when I was 28 years old, I was drafted for military service in Syria. But I couldn’t do it. My only choice was to flee. I packed a backpack that evening, said goodbye to my mother and took a taxi to the Lebanese border, four hours away. Thankfully, I was able to get out.

I stayed with one of my brothers in Lebanon for 10 months, and eventually ended up in Istanbul, where I volunteered for a local LGBTQ+ organization. One of my colleagues suggested I apply to live in Canada as a refugee, and I followed her advice. A few months later, my application was accepted. I was so excited. I felt like Canada adopted me. I didn’t know much about the country at that point. I knew it was cold and thought it was near the North Pole. I figured it’d be like New York City in the movies—big bright lights and busy streets. Most importantly, I knew Canada would accept me and my sexuality.

I moved to Ottawa in November of 2016. At the airport, I was welcomed by volunteers from a local organization, the Capital Rainbow Refuge, which helps LGBTQ+ refugees settle in Canada. I lived with two of the volunteers—a gay couple—for free for the first six months. Then I rented a room in a shared house in Centretown.

RELATED: My family and I fled gang violence in Mexico and made a home in Canada

I remember the first time I went to a gay bar with the couple who hosted me. I thought it would have bright flashing lights, like a nightclub, but in reality it was just some men drinking beer and playing pool. I realized that being queer in Ottawa doesn’t mean going to clubs and partying all the time. You can just go and have a beer or see a concert alongside people like you. I could go out anytime without needing to hide who I am.

When I arrived, I worked remotely doing translation work for a company in Dubai. I worked there for two years, then I got a job at Max Ottawa, a non-profit that promotes health and wellness for LGBTQ+ people. I organize programming for queer newcomers and coordinate our volunteers.

I was lonely in Canada at the beginning. Then, in 2019, one of my sisters got refugee status and moved here with her husband and four kids. One day, out of the blue, she asked me if I was gay. I said, “Will this make any difference in our relationship?” She said no, so I told her. It was a huge relief.

I love living in a place where I can be free about my sexuality—where I can wear my earrings, grow my hair and dye it, put on whatever I want without being judged. I’m focused on continuing to build a good life here. I like biking and walking by the rivers in Ottawa and Gatineau. I enjoy jazz concerts in the city, picnicking with friends and seeing films at the ByTowne Cinema. I’m still in touch with the volunteers who met me at the airport back in 2016. I’m satisfied with where I am.

I still miss Syria, but I don’t know when I can return. Since I’ve been so involved with activism for Syrians and the LGBTQ+ community, I’m not sure if it’ll ever be safe for me to go back. Half my family has left Syria, anyhow. My mom passed away, and several of my siblings have moved to Europe. The Syria I love is only in my head. It doesn’t exist anymore. What I have left are my memories. I write them down and talk to other people about them. Sharing my experiences helps me heal.

This article appears in print in the September 2022 issue of Maclean’s magazine. Subscribe to the monthly print magazine here, or buy the issue online here.