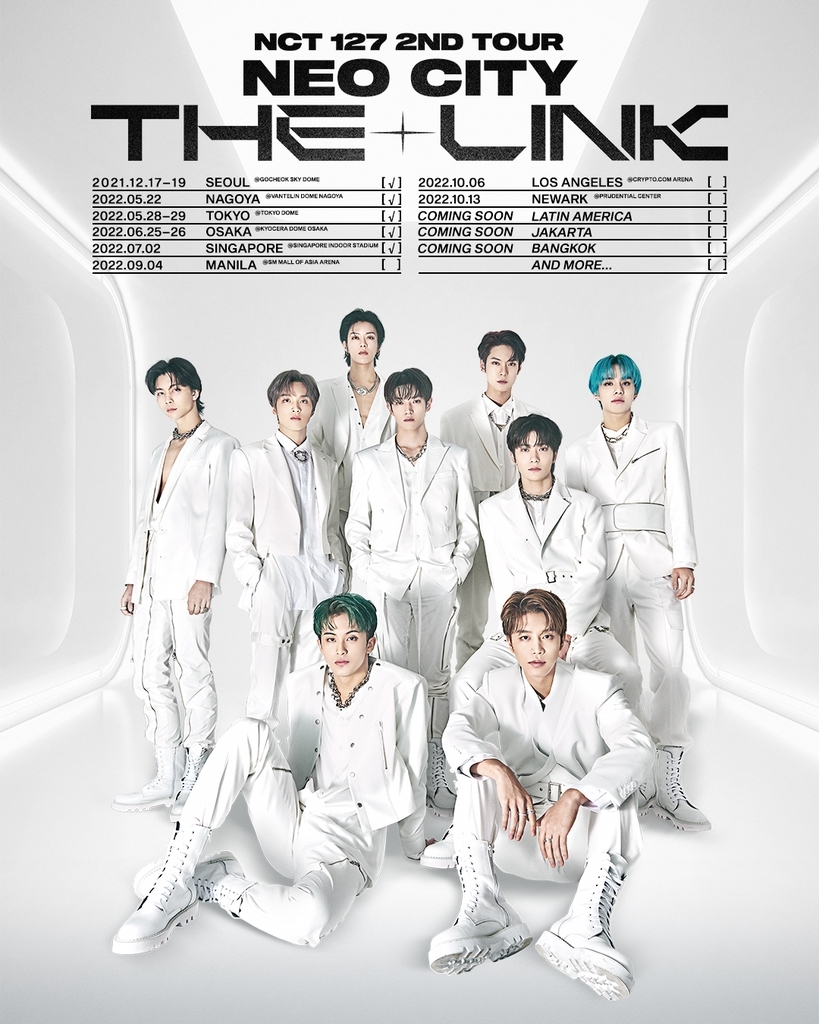 NCT127 will extend its second world tour to North America and South America, as well as to more cities in Asia, announced label SM Entertainment on Monday.

The band kicked off its tour “Neo City – The Link” in Seoul in December. It performed in Tokyo, Osaka and Nagoya in Japan, as well as in Singapore. In September, it will head to Manila, the Philippines, and in October, begin the US leg of the tour, landing in Los Angeles first. More destinations in Latin America and Asia are to be announced.

On Sept. 16, the septet will come out with its fourth studio album “2 Baddies,” about 11 months since “Favorites,” a repackage of its third LP “Stickers.” The third LP hit the Billboard 200 at No. 3, a record for the band, and stayed for 17 weeks in a row, the longest streak for albums that were released in the year. Combined with the reissue, the album sold more than 3 million copies.

Youngjae of GOT7 will host a fan meet event on his own on Sept. 17, said label JYP Entertainment on Monday.

The meet and greet will also celebrate his birthday and will be broadcast live for fans who cannot attend.

The musician recently wrapped up touring Manila in the Philippines, Singapore and Bangkok, where he dropped a collaboration with Thai rapper F.Hero. The single “Irreplaceable” topped the iTunes top songs chart in Thailand.

He also sang the main theme song for the drama “Good Job” with bandmate Jay B. The swing jazz tune was released last week. Youngjae is hosting a radio show as well.

Thanking fans for supporting the performer couple, it said that the two — on their own and as a duo — put out bold music, unique visuals and performances that only they could pull off. Their passion as artists, as well as consideration and care for the staff have been exemplary, it added.

The two joined the company in 2019. They were laid off from their previous agency Cube Entertainment after admitting their relationship. HyunA was a member of Wonder Girls, and then 4Minute, as was Dawn of Pentagon. She put out eighth solo EP “Nabillera” last month and he dropped the single “Stupid Cool” in June.

All tickets for rookie girl group Kep1er’s showcase to mark its official debut in Japan sold out in three minutes, according to agency Wake One Monday.

The nine-member act added a date to the event that was originally planned for Sept. 10 and 11.

It will roll out a debut album in the country, “Fly-Up,” on Sept. 7. It released a lead track “Wing Wing” in advance. Even before the official debut, the nonet made the cover of Japanese magazine non-no’s October issue.