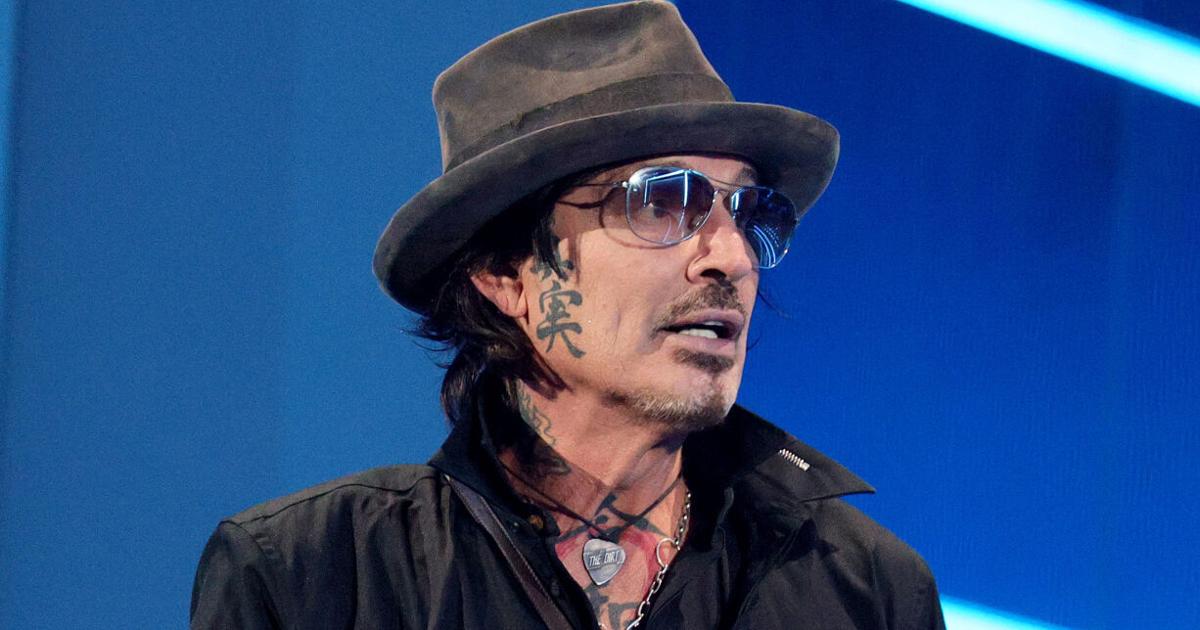 Take a look at trending topics for today, Aug. 11:

Rocker Tommy Lee posted a full-frontal nude photo on Instagram and Facebook early Thursday that he cheekily captioned with “Ooooopppsss.”

But clearly, the graphic photo’s appearance was no mistake. And while the penis pic has since been removed from the platforms, the Motley Crue rocker sparked a debate about the social media sites’ community guidelines, citing a double standard in that Instagram censored his image differently from others.

Newsweek reported that the image, which showed the heavily tatted musician naked while sitting on the edge of a tub, was up for about four hours — “an insane amount of time,” according to one Twitter user.

David Bell’s grandfather, father and brother played in the majors. Bell spent 12 years in the big leagues himself and worked as a coach and front office executive before taking over as manager of the Cincinnati Reds.

So yeah, “ Field of Dreams,” a movie about family and baseball, hits a little differently for him.

“Field of Dreams” gets another tribute Thursday night when Bell’s Reds take on the Chicago Cubs in a throwback ballpark in the cornfields of eastern Iowa, a short walk from the field where Kevin Costner, James Earl Jones, Ray Liotta and Amy Madigan filmed the 1989 movie.

An attorney for Britney Spears is speaking out against a series of videos posted ​by the singer’s ex-husband, Kevin Federline​.

On Wednesday, Federline posted to Instagram multiple videos that he said were filmed by Spears’ sons several years ago in which she appears to have verbal disagreements and uses harsh language with her two children. The videos have since been removed from the social media platform, but they were published by TMZ. In a statement to CNN, Spears’ attorney said they are “working with Instagram to ensure that Mr. Federline adheres to its rules, and we are exploring all appropriate relief against him.”

“Whether he realizes it or not, Mr. Federline has not only violated the privacy and dignity of the mother of his children, he has undermined his own children, whose privacy he should protect,” Mathew Rosengart, Spears’ attorney said.

Read more about some of today’s trending topics here:

U.S. gas prices have dipped under $4 a gallon for the first time in more than five months. AAA says the national average is $3.99 for a gallon of regular. That’s down 15 cents in just the last week, and 68 cents in the last month. Gasoline peaked at around $5.02 a gallon on June 14. Motorists in California and Hawaii are still paying above $5, and other states in the West are paying close to that. The cheapest gas is in Texas and several other states in the South and Midwest. The decline reflects falling prices for crude oil, which have dipped close to $90 a barrel from over $120 a barrel in June.

The director of the FBI has strong words for supporters of former President Donald Trump who have been using violent rhetoric in the wake of his agency’s search of Trump’s Mar-a-Lago home. Christopher Wray says threats circulating online against federal agents and the Justice Department are “deplorable and dangerous.” He says, “Violence against law enforcement is not the answer, no matter who you’re upset with.” Wray made the remarks Wednesday following a news conference during a long-planned visit to the agency’s field office in Omaha, Nebraska. He declined to answer questions about the hours-long search Monday of Trump’s Palm Beach, Florida, resort.

Ukraine says that nine Russian warplanes were destroyed in a deadly string of explosions at an air base in Crimea that appeared to be the result of a Ukrainian attack. That would represent a significant escalation in the war. Russia denied any aircraft were damaged in Tuesday’s blasts — or that any attack took place. Ukrainian officials have stopped short of claiming responsibility for the explosions at the Saki air base. Satellite photos taken Wednesday showed damaged warplanes. In Ukraine’s east, where fighting has raged for eight years, a Russian attack on Bakhmut in the Donetsk region killed seven, wounded six and damaged stores, homes and apartment buildings, setting off fires

President Joe Biden has signed veterans health care legislation that ends a long battle to expand benefits for troops who served near toxic “burn pits.” The ceremony Wednesday at the White House was a personal matter for Biden. His son Beau was a major in the Delaware Army National Guard, and he died of cancer after his service in Iraq. Burn pits were used in Iraq and Afghanistan to dispose of chemicals, cans, plastics, medical equipment and human waste. The legislation will help veterans get disability payments without having to prove their illness was the result of their service. Other health care services will be expanded as well.

Donald Trump says he invoked the Fifth Amendment and wouldn’t answer questions under oath in the long-running New York civil investigation into his business dealings. Trump arrived at New York Attorney General Letitia James’ offices Wednesday morning, but sent out a statement more than an hour later saying he declined to answer the questions under the rights and privileges afforded to every citizen under the United States Constitution.” Anything he said during the deposition could have been used against him in a criminal case, if one ensues. While James’ investigation is civil in nature, the Manhattan district attorney is running a parallel criminal probe.

Authorities say three people were killed when a house exploded in the southern Indiana city of Evansville. David Anson, chief deputy coroner for Vanderburgh County, told The Associated Press that the identities of the people who died in the explosion Wednesday will not be released until the next of kin has been notified. Evansville police spokeswoman Sgt. Anna Gray says at least one other person was injured. Fire Chief Mike Connelly has said a total of 39 houses were damaged by the explosion at around 1 p.m. He said the department has not confirmed how many of the houses were occupied when the explosion. The cause of the explosion has not been determined, but the Bureau of Alcohol, Tobacco, Firearms and Explosives is investigating.

President Joe Biden has arrived in South Carolina to begin what’s expected to be at least a seven-day vacation with members of his family. The Bidens will be in Kiawah Island, noted for its private beach and golf resort, through Tuesday, according to Federal Aviation Administration advisories. The White House did not respond to requests to provide details on Biden’s vacation schedule, activities or when he planned to return to Washington. While Biden is in South Carolina, the House is set to vote to approve a bill full of his priorities, including the most substantial investment in history to fight climate change, some $369 billion over the decade.

Political leaders honored Republican U.S. Rep. Jackie Walorski of Indiana as a determined advocate for her beliefs during a funeral after she and three other people were killed in a highway crash last week. Numerous members of Congress were among several hundred mourners Thursday at a church near Walorski’s northern Indiana home. Republican House Minority Leader Kevin McCarthy said Walorski never had a job, but “a mission,” pointing to her work as a Christian missionary in Romania with her husband, as the director of a local humane society and as a television news reporter before entering politics. Walorski was first elected to Congress in 2012 and was seeking reelection this year in the solidly Republican district.

Joe Arpaio, the 90-year-old former Arizona sheriff who was a once powerful figure in Republican politics, has been defeated in a race for mayor of the affluent suburb where he has lived for more than two decades. His defeat Wednesday in the mayor’s race in Fountain Hills against two-term incumbent Ginny Dickey marks Arpaio’s third failed comeback bid since his 2016 loss after serving 24 years as the sheriff of Maricopa County. Arpaio said he wasn’t conceding the race and instead was going to consult with an attorney to explore whether to challenge the results. Dickey didn’t immediately respond to a request for comment.

A lawyer for the widow of Kobe Bryant told jurors that a “culture of callousness” led Los Angeles County deputies and firefighters to share photos of the remains of Kobe Bryant and other victims of the 2020 helicopter crash that killed the Lakers star, his 13-year-old daughter, and seven others. Vanessa Bryant’s lawyer Luis Li said the photos were “visual gossip” that were shared “for a laugh.” Vanessa Bryant is suing for invasion of privacy. An attorney for LA County said the photos were an essential tool at the crash scene, and that officials successfully kept them from becoming public.

Metallica, Mariah Carey and The Jonas Brothers will headline a free concert in New York’s Central Park to mark the 10th anniversary of the Global Citizen Festival on Sept. 24. There will also be a concert that day in Accra, Ghana, featuring Usher, SZA and H.E.R. But Global Citizen CEO Hugh Evans says the event will be less a celebration and more of a call to action to immediately address numerous crises, including the ongoing COVID-19 pandemic and the war in Ukraine. Together, the group estimates those issues could push 200 million more people into extreme poverty by the end of November.