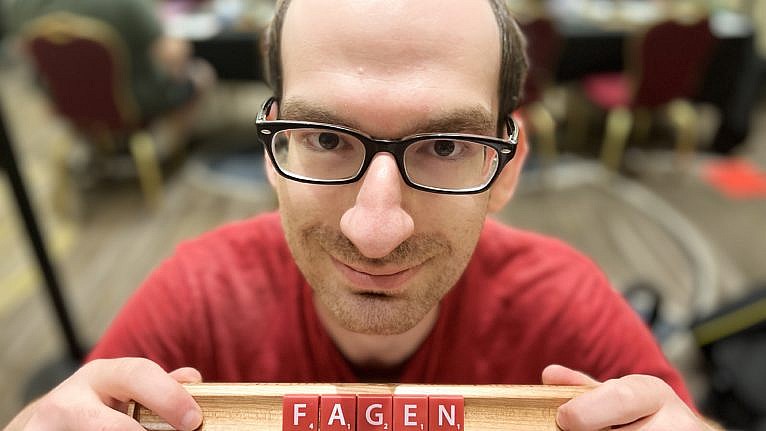 Almost 300 international Scrabble devotees gathered in Baltimore on July 23 for the 2022 Scrabble Players Championship—North America’s largest Scrabble competition—eager to earn triple word scores and the winner’s title. But only one player came away with the championship trophy: Montrealer Michael Fagen.

Despite being the 28th seed in his 42-person division, Fagen arrived back in Canada the 31st winner of the prestigious tournament. His winning word? “LEVIRATES,” which describes the custom of a man having to marry his brother’s widow. It was a tense moment for Fagen. “I actually saw the word pretty quickly,” he says. “But I was hoping my opponent wouldn’t block it.”

We recently sat down with the King of Scrabble to find out how he began playing the game competitively, who taught him to play in the first place, and what’s next—including whether he’s planning on defending his title next year. This conversation has been edited and condensed for length and clarity.

First of all, how does it feel to be the 2022 North American Scrabble champion?

Take us back to the beginning. When did you start playing Scrabble?

When I was about three years old I started playing with those lettered fridge magnets. My parents noticed that I wasn’t just putting the letters up in a random order, but that it was actually the same order every time, so that maybe suggested to them that I had some kind of ability or passion [for words]. Around the same time, I started using the Scrabble board and tiles to make the names of my classmates, usually after my parents had played a game and left the board out.

A few years after that, I started playing for real. My mother would help me as we played casually, and as I got better, I was able to play against her without help.

When did you turn competitive?

I started playing at the Montreal Scrabble Club in Côte Saint-Luc when I was 14. That was a big turning point for me because by playing almost every week I quickly and consistently got better, plus I was able to face players of all levels. I was hooked.

About two years later, I started playing tournaments. My first was a local one in Montreal, and there were 14 games over the weekend. I also did some other local tournaments in Kingston and Cornwall. Then, when I was 20, I played my first international tournament in Albany. It was a pretty big one, about 100 people. I was one of the lowest rated players there, 24 out of 26 I believe, and I ended up finishing right near the middle. From there, my rating went up nationally.

Let’s talk about the North American Scrabble tournament. How did you prepare for the big event?

It’s the biggest tournament in all of North America, with 300 to 500 people from all over Canada, the United States, and overseas. In the past few years, it’s usually been 31 games over five days (so seven games on each of the first four days, and then three more on the final day).

To prepare, I probably spent an average of 45 minutes a day studying words, games and analyzing positions leading up to the event. It was also important for me to be well-focused, so before I left for the tournament I made sure everything at home was done. I finished all my chores, cleaned everything up, and got caught up on work and job applications so I could focus entirely on Scrabble and not have to worry about what was going on back home. I feel that really helped me.

Heading into the tournament, you were seeded in the bottom half of your division, ranked 28th of 42 players. Do you think your opponents underestimated you as a competitor?

It’s definitely possible. But we’re all really good players, so even though our ratings were a little bit different I don’t know how much that would have impacted what my opponents thought of me. Also, I hadn’t played a lot of the players before so they didn’t know my playing style. They probably just assumed I was really good at the game and went with that. I’m definitely not a psychologist by any stretch, but there’s also a lot of psychology involved in Scrabble, which can sometimes have a big effect on how you play.

What do you mean by that?

There’s a lot to think about when you only have maybe a few minutes per turn, which can be challenging. When I’m playing a game, for example, I’m thinking about what I’m leaving on the rack for the next turn, where on the board my opponent might likely play and what spots they’re likely to leave alone. I’m also thinking about what tiles are left to draw, the probability of drawing certain tiles, like vowels, and how much time I have left.

I’m also looking at shape of the board and if it’s easy to play a bingo, which is when you use all seven tiles on your rack in a single turn. It can be very frustrating when you have a bingo on your rack but nowhere on the board to play it. For example, I had the word “FAINTER” in my first game of the finals but couldn’t play it.

You secured the win by forming the word “LEVIRATES.” Take me through that moment.

First of all, it’s nine letters, and you only have seven letters on your rack at a time. It’s very hard to make a nine letter word because you have to play through two letters that are already on the board.

I actually saw the word pretty quickly after I picked my replacement tiles on the previous turn, but I was hoping my opponent wouldn’t block it. After a few minutes of thinking, they made a play that looked like they were going to. Luckily the word still fit, so I knew I won the game as long as the word was valid.

That was a flashy play since it’s rare to play a nine-letter word, and even rarer to play two nine-letter words in the same game. In that sense, it felt good to win the game in style. I also feel like players might think I’m more deserving of the win since I made a good, ‘hard-to-see’ play as opposed to one that was more obvious.

Do you have your sights set on any other upcoming competitions?

Yes. My next tournament is probably going to be in October at an annual tournament in Lake George, New York, which will probably get about 100 people. I also want to thrive next year at the North American Scrabble tournament again where I will defend my title. I believe it’s going to be held in Las Vegas. I feel like now that I’m famous, people are going to want me to be there. Maybe they’ll even disappointed if I’m not. Who knows.

Do you have Scrabble tips for people getting started with Scrabble, or for the average player?

I think the most important thing is to enjoy it. There’s certainly no obligation to become a top player. You don’t have to spend hours memorizing thousands of words, just have fun.

If you want to get better at the game, learning words is a great way to do so. Two and three letter words are very important because they get played very frequently. It’s also good to learn some seven- and eight-letter words, and those that are high probability, meaning the ones that are relatively likely to come up on your rack, like “QI.”

I don’t want to steer new players away, but in the beginning you will make mistakes. Every situation is new, every game is different. So it’s almost impossible to not make a mistake. And even if you don’t think you made the mistake, it’s the nature of the game.