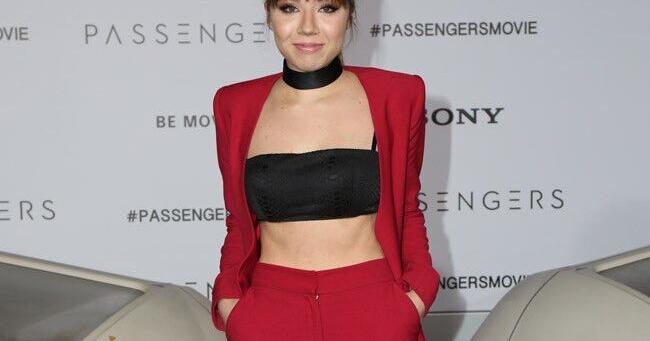 Jennette McCurdy developed an eating disorder on the set of ‘iCarly’.

The 30-year-old former actress shot to fame as a teenager playing Sam Puckett on the hit Nickelodeon sitcom alongside Miranda Cosgrove but claimed that she was left “anxious” because of the amount of food her character had to eat as a running gag.

She said: “It’s tragically hilarious. It made me so anxious because my character was constantly eating.I tried speaking with the producers on a couple occasions, asking if we could dial back on that stuff.”

The ‘Sam and Cat’ star went on to explain that although she tried speaking to ‘iCarly’ bosses, she couldn’t face the issue head-on and started to feel “mocked” by her own life when fans would “poke fun” at her for the amount of food her character would eat on the show.

She told The Washington Post: “I had some sort of reasoning [when I spoke to producers], like ‘I think there’s so much more to Sam as a character, and I think she goes much deeper than this.’ But I was not capable of facing the eating disorder for myself so, of course, I wasn’t capable of saying, ‘Hey, I’m actually really struggling with this. So, can we not?’

“It started to feel like my life was mocking me in every way. They didn’t know what I was struggling with, but it felt like people were just poking directly in every f****** insecurity and every trauma that I had. It was just twisting the knife.”

Meanwhile, Jennette – who lost her mother Debra to cancer back in 2013 – has penned an autobiography titled ‘I’m Glad My Mom Died’, in which she alleges that she suffered abuse at the hands of her mother and a Nickelodeon boss referred to as The Creator and explained that it is “important” to talk about even though it makes her “angry”.

She said: “My heart starts beating fast. It makes me angry. But it’s important to talk about. It was so commonplace, his behavior, and it was so accepted because everyone was scared of losing their job. I don’t blame any of them. I get it. But it was really unfortunate, everything that happened in a children’s television series environment. It really seems like there’s not much of a moral compass there.”