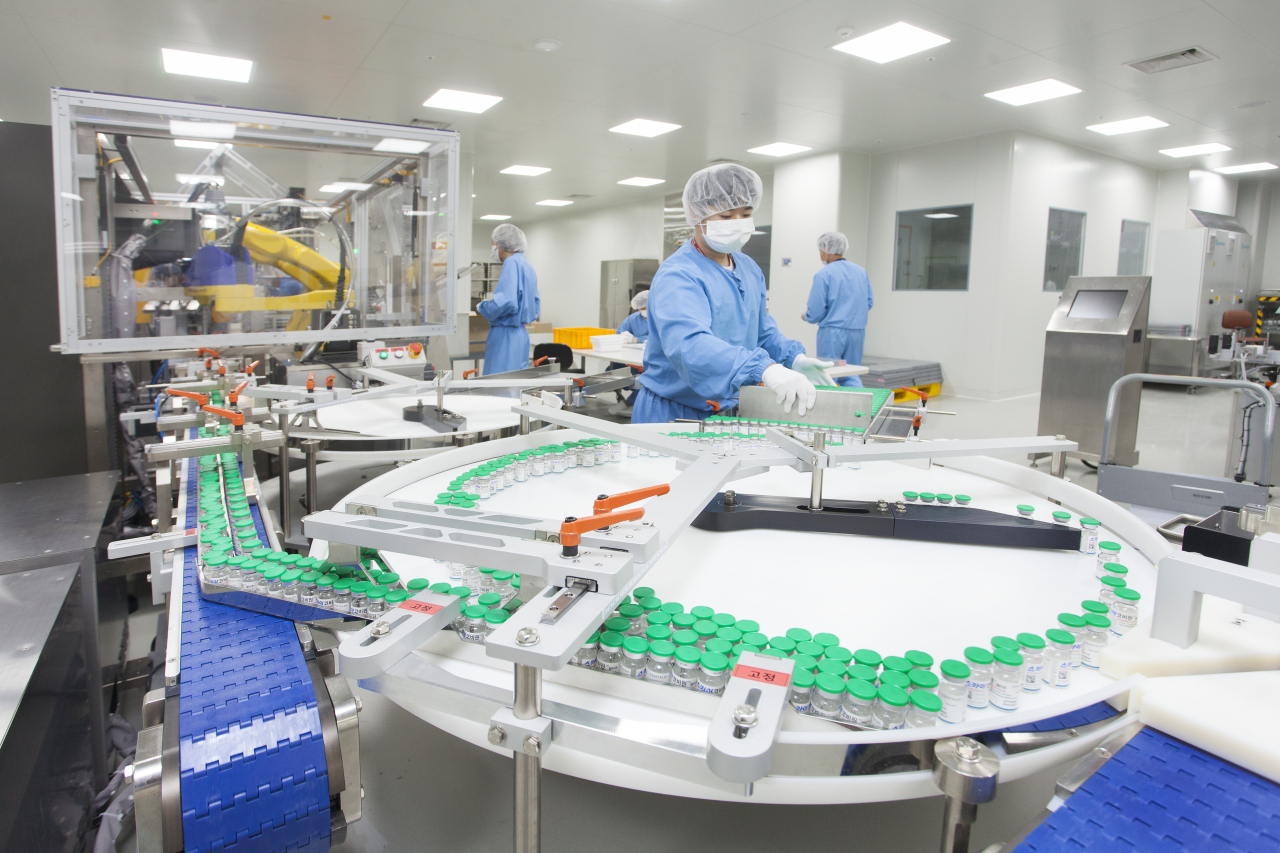 ANDONG, North Gyeongsang Province — Hundreds of vials were lined up on the belt of a packaging machine at L House, SK Bioscience’s vaccine manufacturing facility in Andong, North Gyeongsang Province on Wednesday afternoon, as the developer of South Korea’s first homegrown COVID-19 vaccine SKYCovione is poised to roll out the vaccine’s first batch by the end of August.

A few researchers, who were covered from head to toe with sterilized gear — protective shoes, clothing and hair caps — oversaw the automatic process while others put finishing touches on the packages.

On the surface of the packaged products, which were stacked one by one in a yellow plastic box, it read: “SKYCovione Multi-Inj.”

“It takes about four months to have a final SKYCovione drug product ready to be rolled out,” said Lee Sang-gyun, general manager of Andong L House and senior vice president of SK Bioscience, referring to the entire process of cell culture, fermentation, refining and quality control of the vaccine.

“We are currently working to produce 60,000 vials as the first batch of SKYCovione, which would equal to 600,000 doses. We plan to apply for a national lot release review with the Ministry of Food and Drug Safety next week,” he said.

Inside each package, there were 10 vials of SKYCovione, along with 10 vials of global drug maker GSK’s pandemic adjuvant. Lee explained that doctors and medical workers would mix the two when administering the vaccine.

L House is currently operating all of its nine suites to produce various vaccines. Of them, two suites are in charge of cell culture and fermentation of two different components, A and B. These components make up nanoparticles, which serve as the basis of SKYCovione, a recombinant protein vaccine.

“For the first batch of SKYCovione, the expiration period is six months, because that is the duration we secured from the safety results of the clinical trials,” Lee said.

The general manager explained that the expiration period will be longer as more safety data of the vaccine are obtained moving forward. According to SK Bioscience, SKYCovione can be stored at temperatures between 2 to 8 degrees Celsius, so it can be transported more easily than other COVID-19 vaccines that require deep freezing conditions.

Lee highlighted that the rollout of SKYCovione will pick up its pace once the company obtains the national lot release approval from the drug authorities. The government inked an early purchase contract with SK Bioscience to buy 10 million doses of SKYCovione in March.

SK Bioscience plans to begin shipments of its COVID-19 vaccine to the global market as it seeks approvals from the World Health Organization and countries across the world.

With the government’s approval of SKYCovione in June, South Korea became only the third country in the world to have developed both COVID-19 treatment and vaccine behind the UK and the US.