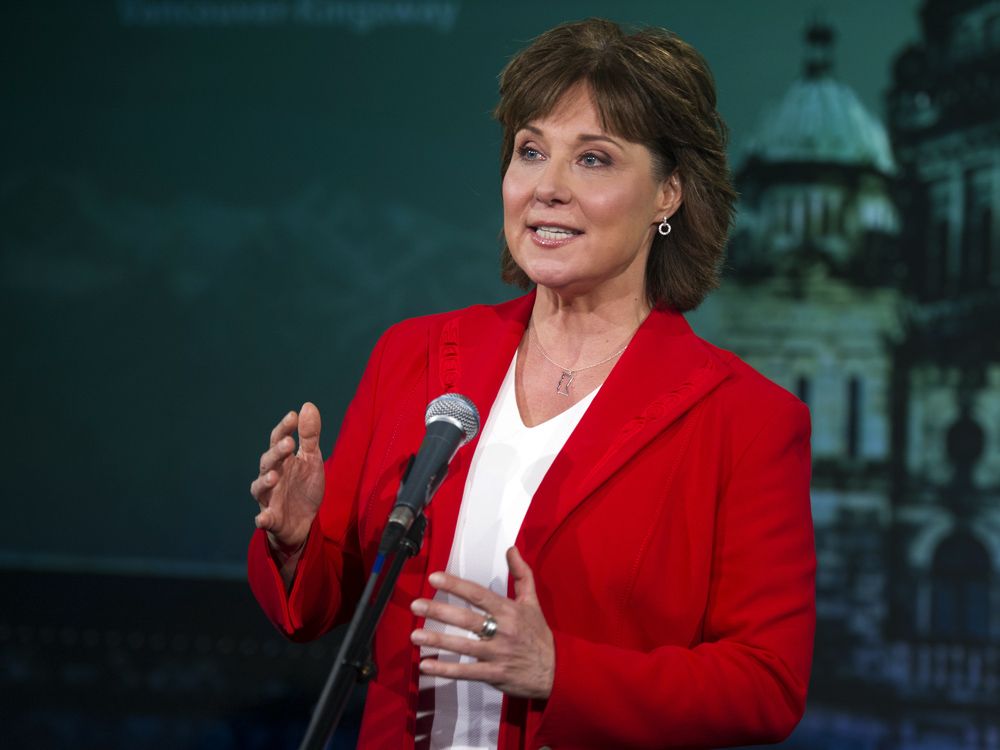 Former British Columbia premier Christy Clark made a passionate plea for more moderate Conservatives to end the cycle of “clickbait politicians” which are tearing the country apart — and hinted that Jean Charest could be the man for the job.

Clark was the keynote speaker of the Centre Ice Conservatives conference in Edmonton on Thursday, which aimed to bring Conservatives on the centre or centre-right of the political spectrum together to discuss notably how to grow a strong, centrist base in Canada.

“We have a chance to change this cycle of divisive politics in this country and this meeting today, I think, is the beginning of that,” said Clark.

Clark said she would be voting in the leadership of the Conservative Party of Canada, and declined to confirm who would be listed as her No. 1 choice. She however said that former Quebec Premier Jean Charest “would be a fantastic Prime Minister.”

That declaration provoked a round of applause in the room.

“By the way, I also thought Tasha Kheiriddin would be a great Prime Minister too,” added Clark.

Kheiriddin, who was in the room, considered running for the Conservative leadership race, but decided to throw her support behind Charest instead. The political commentator and author now serves as his national campaign co-chair.

Clark, who led Canada’s third largest province for over six years, reflected on her own experience as leader of the coalition within the B.C. Liberals. She said she learned to listen to people who “hated (her) guts” and thought she was “wrong about absolutely everything.”

“I think it’s really important that we all get vaccinated,” she said. “But I don’t believe that the people who refuse to get vaccinated are stupid, or disloyal to the country.”

She also did not mince words towards the federal Conservatives, which she said is making “its race for the extremes” and playing “to the very edges of the political divide.”

Being exposed to different opinions and controversial ideas, she said, is what will save the Canadian public from “clickbait politicians who think their best path to success is to exploit and prey on our worst instincts.”

“We need to be allowed to talk. We need to be willing to listen. And we have to stop thinking that opposing opinions are somehow dangerous to us because they are different from ours,” she insisted.

The Centre Ice Conservatives conference saw a variety of speakers from the Conservative movement speak about a variety of issues, from growing the economy, to promoting the energy sector and an energy transition and even discussing Canadian foreign policy.

As panellists were advocating for higher productivity growth and the exploitation of critical minerals, some snuck in a few comments here and there more or less directed at the current state of the Conservative Party of Canada.

“It is particularly nice to see a roomful of conservatives who want to talk about growth and policy rather than say, ‘Does the World Economic Forum control our futures?’ ” said political columnist Andrew Coyne, whose comments sparked laughter and applause in the room.

Kheiriddin said that “the centre, as it is put, is not a mushy middle.”

“This is a place where people can meet and find some common ground and actually have civil conversation around issues to move forward,” she said.