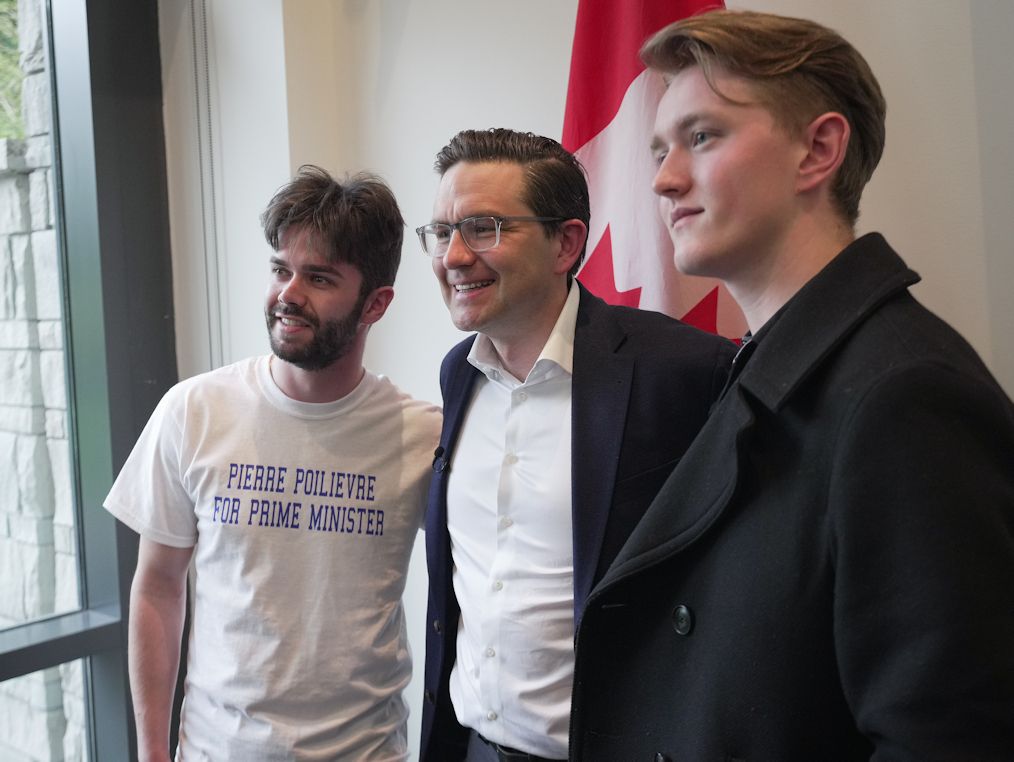 Every few weeks, a new poll emerges with evidence of a phenomenon that basically never happens in Canadian politics: young people favouring the Conservative Party.

A recent Abacus Data poll showed that 37 per cent of 18 to 29 year olds were prepared to back the Tories — a larger base of support than for either the Liberals or the NDP.

Abacus also found that a plurality of 18-44 voters are favouring the Conservatives for the first time. Previously, the category was reliably dominated by the Liberals.

The trend also cropped up in a May survey by Nanos research showing that young voters were increasingly abandoning the Liberals for the Tories.

Conservatives have traditionally been lucky if they can attract 25 per cent of under-29 voters. But Nanos found that in the first quarter of 2022, they were pulling in 33 per cent.

Polling analyst Bryan Breguet told National Post that surveys of under-30 voters are notoriously volatile, so he’s not yet willing to hang his hat on any notion that the Conservatives have captured a plurality of the youth vote.

However, he said that conservative parties are definitely becoming more “competitive” among the 18-34 set.

Remember when I said @PierrePoilievre is hitting the points young people want & the NDP will lose them if Singh keeps repeating nonsense?

In the 2021 federal election, under-34 voters were generally most likely to lodge their votes with the NDP or the Liberals.

Based on an aggregate of opinion polls conducted throughout the 2021 federal election, Breguet found that the Tories attracted a lacklustre 26 per cent of youth voter support against the 34 per cent that they garnered overall.

What’s notable, however, is that the hard-right People’s Party of Canada obtained an incredible seven per cent of the under-34 demographic — one of their strongest demographics overall.

“So if we assume that (Conservative leadership candidate Pierre Poilievre) is getting this PPC vote (which is a good assumption), I think this confirms that a Poilievre-led CPC could do a lot better among young people,” Breguet told the Post.

Poilievre’s domineering rise in the Conservative leadership race has indeed been accompanied by disproportionate levels of youth support.

In April, one of Poilievre’s first campaign videos about housing affordability was shown by Abacus pollsters to a cross-section of Canadians. While older respondents were lukewarm about the video, more than 60 per cent of respondents aged 30 to 44 gave the video a thumbs up.

Similar results can be found in a poll of reactions to Freedom Convoy, the anti-mandate protest whose cause Poilievre has obliquely championed. A February poll by Ipsos found that among 18- to 34-year-olds, 61 per cent supported the notion that the root goals of the protest were “worthy of our sympathy.”

Among respondents 55 and over, by contrast, only 37 per cent entertained the notion that Freedom Convoy had legitimate grievances.

If a youth trend towards conservative positions keeps up, it represents a phenomenon that has happened with startling rarity in the last 100 years of Western electoral politics. As a rule, the majority of under-30 voters in Western democracies (particularly English-speaking ones) do not vote for right-wing parties.

In the United States, the Democratic Party currently enjoys blowout support among anybody under 30. An April poll by the Harvard Kennedy School found that 55 per cent of youth voters preferred Democratic control of Congress, against just 34 per cent who preferred Republican.

In the U.K.’s 2019 general election, Labour enjoyed a devastating lead among under-29 Brits. An incredible 56 per cent of 18-24 voters favoured Labour, against just 21 per cent for the Conservatives, according to YouGov.

The last major exception to this trend arguably came a generation ago in the 1980s.

In the U.K., the Conservative Party under Margaret Thatcher captured a plurality of youth voters when winning their first majority government in 1979. And by the time of Thatcher’s decisive re-election in 1983, 42 per cent of under-25 voters were backing the Conservatives against just 33 per cent who voted Labour.

U.S. President Ronald Reagan similarly helped spearhead a brief exodus of young people to the Republican Party. At the end of Reagan’s second term in 1988, a report by The New York Times cited a poll of 18-29 voters from 1980 in which Democrats had outnumbered Republicans by more than two to one.

The Times noted that after eight years of Reagan, that same group of voters was now almost perfectly divided among Republicans and Democrats.

In recent years, Beijing has gotten awful comfortable with publicly berating any Canadian public figure they deem to be supporting an anti-China position, however tenuously. Of late, this has come to include Vancouver Mayor Kennedy Stewart. Last week, Stewart told the Chinese-language Sing Tao Daily that he supported the recent visit of U.S. House Speaker Nancy Pelosi to Taiwan, which Beijing claims is Chinese territory. This sparked an official warning from the Vancouver consulate of the People’s Republic of China, in which Stewart was told to “be cautious in his words and deeds on Taiwan-related issues.”

So it turns out that the RCMP is clandestinely uploading spyware onto the smartphones of Canadians so that the Mounties can read texts and even switch on the phone’s microphone. It’s not happening a lot – about 50 devices have been tapped since 2017 – but it still sparked ire from Privacy Commissioner Philippe Dufresne that nobody had told him about it. To which Public Safety Minister Marco Mendicino issued a statement saying that “protections” are in place to ensure the technology isn’t abused. Given that Mendicino does not have a great reputation for saying accurate things (most recently he claimed a bill targeting legal gun owners “doesn’t target law-abiding gun owners”), this may not be completely reassuring.