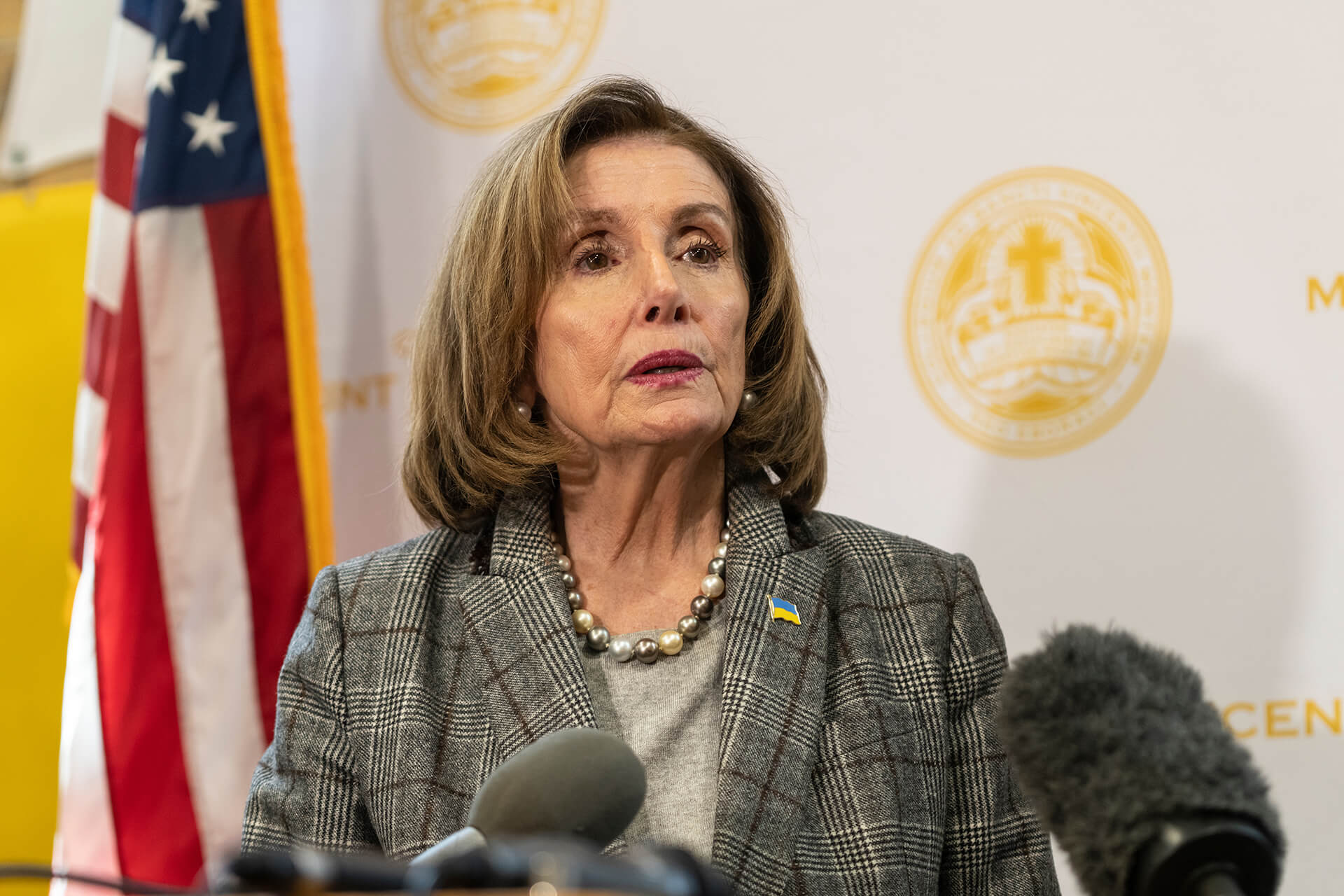 Though her precise intentions were a matter of speculation, Speaker Nancy Pelosi clearly crafted her feigned impromptu visit to Taiwan as a provocation. She knew it would trigger a reaction from China followed by the display of some kind of fireworks. The world – and especially most of Asia –

watched in trepidation as it tried to contain fears that the fireworks might turn nuclear.

Could Pelosi really have failed to understand that her friendly gesture would unsettle the situation of the very people she believed she was helping? As one Taiwanese professor writing for Newsweek explained, “Taiwan has been relegated to serving as the proving ground for Great Power insecurities.” Is that the role she imagines the Taiwanese would like to be playing in geopolitics?

Her president, Joe Biden, warned her of possible unintended consequences. Ironically, that warning produced unintended consequences for Biden himself, who was left looking like a president unable to get his own party’s Congressional leader to make and enforce foreign policy, his job and not hers. What does it mean to be “leader of the free world”? In Ukraine the US is fully engaged in a war it refuses to fight. The vaunted “strategic ambiguity” that defines its Taiwan policy has become 100% ambiguity and 0% strategy. Apart from poking nuclear bears and hoping their excessive reaction will make the US look like an innocent victim to the outside world, does the US have any kind of consistent geopolitical strategy?

In such a context, how should Washington’s allies react? Europe has shown solidarity on Ukraine, but that may already be fraying. At least the US can count on the UK to always be at its side. The automatic alignment shown by the then prime minister Tony Blair two decades ago and still prime minister Boris Johnson this year has cast Britain as the poodle of its former 13 colonies who have since expanded across the continent. It’s slightly more surprising that the UK’s “serious” (non-tabloid) media, with a reputation for independence, now follows suit, dutifully echoing its US counterparts. Just as the CIA has long been dictating the content of its reporting to The New York Times and The Washington Post, MI6 may be fulfilling the same function for the BBC, The Guardian and others in London.

Not only is there a noticeable “’close alignment’ between foreign policy in London and Washington” as the BBC reported last year, but the BBC itself appears to embrace that alignment. Reporting from Beijing on the consequences of Pelosi’s visit, BBC’s Stephen McDonell offers a take on Pelosi’s visit that paints China as the unique provocateur.

“Those with more militaristic tendencies in the upper echelons of power here,” McDonell speculates, “must have secretly welcomed the visit by Ms Pelosi. It has provided an ideal excuse to ramp up the war games around Taiwan in preparation for what they see as the inevitable day when it will be seized by force.”

Readers should notice that the title of McDonell’s piece twists the logic of the entire episode by metaphorically describing it as a sporting event: “Pelosi visit: Taiwan puts the ball firmly in Xi Jinping’s court.” This framing curiously casts Taiwan in an active role. It hides the reality that neither China nor Taiwan sought to play an active role in this chain of events. Even Biden appeared to be passive. Pelosi is the one throwing unplayable balls in other people’s courts.

To skirt any reference to the idea that Pelosi’s visit was an unnecessary and risky provocation, McDonell redefines the drama as evidence of China’s deep belligerence, implicitly contrasting it with the peaceful pursuit of democratic ideals by the US. In this showdown, China is the aggressive military power to be feared. Certainly not the US.

Less than a week later, McDonell is at it again. In a new article, “China-Taiwan: What we learned from Beijing’s drills around the island,” McDonell returns to his mindreading of the Chinese elite. “The hardliners in the upper echelons of the Chinese Communist Party,” he writes, “would probably be quite happy with where Nancy Pelosi’s visit has left them.” In the original article, he claimed that the Chinese “must have secretly welcomed the visit by Ms Pelosi.” A claim based on “must have” and supported by “would probably be” is not journalism. It is the language of polemic and more specifically propaganda. The supposed probability of attributed emotions is not something honest reporters on the beat should be expected to cover.

Despite the lack of discernible consistency in Washington’s foreign policy, McDonell proves consistent in his journalistic practices. Once again, he frames the drama in terms of sport. He claims that the Chinese militarized response to the provocation “is seen as a win for those who want it to happen.” Pelosi’s unneeded and unwanted diplomatic meddling is no longer a factor. It’s all about Chinese belligerence.

McDonell thus proves his commitment to prolonging the style of propaganda that has accompanied the Russia-Ukraine conflict. It is all about denying that the US could ever provoke a drama elsewhere. If and when military hostilities do break out around Taiwan, thanks to reporters like McDonell we can understand and endlessly repeat that it boils down to an “unprovoked” aggression by an autocratic government controlled by evil-minded “hardliners,” Putin being the archetype of an autocratic hardliner.

This usefully simplifies the public’s understanding of the Taiwan drama. On the “democratic” side, there was a “visit,” a perfectly friendly gesture. Who doesn’t like to be visited? On the autocratic side, there is –  or will soon be – an unprovoked aggression. The template already exists, at least since February 24 of this year. But it has other precedents: the incident in the Gulf of Tonkin in 1964 or Saddam Hussein’s terrifying (but non-existent) weapons of mass destruction. Autocracies – and never democracies – are addicted to starting unprovoked wars.

McDonell employs another trick that has become common thanks to the Ukraine conflict. It consists of the journalist leaping inside the brain of designated enemies to reveal their secret thoughts. We have seen endless examples in recent months of professional and citizen journalists alike telling us what Vladimir Putin (aka Peter the Great reborn) is really thinking. McDonell doesn’t dare imagine what the obviously ”inscrutable” Xi Jinping is thinking, but he does suppose that Xi was one of the clique in the “upper echelons of power” who “must have secretly welcomed the visit by Ms Pelosi.”

Journalism about US foreign policy has become formulaic on both sides of the Atlantic. At least since George Bush’s invasion of Iraq, The New York Times has been the consistent leader, probably creating the template McDonell could follow. This week, David Sanger and Amy Qin at The New York Times also invoke a sports metaphor in the title of their article written in the aftermath of the Pelosi visit: “As China Plans Drills Circling Taiwan, U.S. Officials Fear a Squeeze Play.” The authors claim that US officials “worry that the events of the next few days could trigger an unintended confrontation between China’s forces and Taiwan’s.” By “unintended” they mean accidental, as they cite imaginary scenarios of “a missile over the island” or “an incursion into disputed airspace” leading “to a midair conflict.” In other words, if it happens, don’t blame Pelosi. She had nothing to do with it. It’s those inscrutable Chinese hardliners.

Most serious commentators acknowledge that, intentional or not, Pelosi’s move was not just a friendly “visit” but a game-changer that marks a historical turning-point. The consensus, supported by initiatives currently in the US Congress towards recognizing Taiwan’s independence, is that the “strategic ambiguity” initiated four decades ago has already morphed into an increasingly ambiguous non-strategy that is likely at some point to turn into conflict. The question will not be if, but on what scale?

This year, the media has done a superb job evacuating history from its reporting of the Ukraine conflict. Despite his status as a celebrity, Henry Kissinger’s warnings that there are historical factors complicating the narrative left the media indifferent. That same media has totally excluded authoritative and active voices such as John Mearsheimer  – people who know the history  – from any mention on its airwaves or in its columns.

As the tacit acceptance of “strategic ambiguity” fades, we can begin watching the construction of a new pseudo-historical narrative. If the Ukraine coverage is anything to go by, more speculation about the nature and depth of the Chinese enemy’s private thoughts will replace any reference to actual historical reality. That is already borne out by McDonell’s reporting at the BBC.

*[In the age of Oscar Wilde and Mark Twain, another American wit, the journalist Ambrose Bierce produced a series of satirical definitions of commonly used terms, throwing light on their hidden meanings in real discourse. Bierce eventually collected and published them as a book, The Devil’s Dictionary, in 1911. We have shamelessly appropriated his title in the interest of continuing his wholesome pedagogical effort to enlighten generations of readers of the news. Read more of Fair Observer Devil’s Dictionary.]