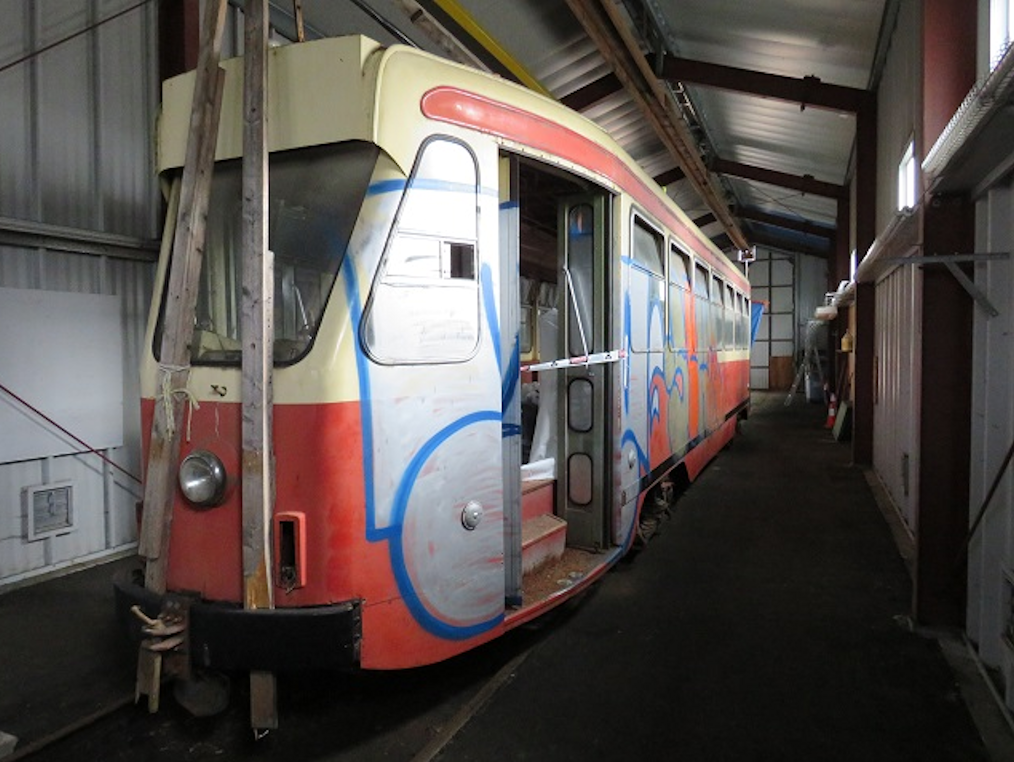 An old streetcar can be yours for as little as a few hundred dollars. There’s just one catch: You have to haul it away yourself.

Last week, the B.C. department in charge of “Asset Investment Recovery” posted a listing for an “Electric Streetcar” that was charitably described as being “not in working condition.”

The 15-metre-long streetcar is “untested,” it has parts missing, its wheels are seized, the exterior is covered in graffiti and it appears to have been plundered for copper wire. It’s also apparently flush with asbestos.

Any winning bidder also faces a logistical nightmare in picking it up from its current home inside a storage shed within sight of Vancouver’s False Creek.

The 43,000-pound streetcar can’t be moved until its owner spends some time upgrading the tracks on which it currently sits. Once the streetcar is hauled onto a flatbed trailer (or dismantled), the buyer will have to supply the B.C. government with a detailed “risk mitigation and traffic plan” to ensure they can move it safely.

For all these reasons, bidding on the car has remained relatively sluggish. As of press time, after 125 total bids the streetcar has a high bid of $310. This means that the vehicle is being bid up in average increments of just $2.50.

Electric streetcars were once ubiquitous in major Canadian cities. At the time of the First World War, most residents in both Victoria and Vancouver lived a short walk away from a streetcar network that connected even the most distant suburbs. With the notable exception of Toronto, urban streetcar networks were almost completely dismantled by the 1950s. In Vancouver, many of the city’s famous electric trolleybuses roughly follow the routes of the old streetcars.

But the streetcar being auctioned off by the government of B.C. was never actually in Canadian service. The last time it accepted paying passengers was on the streets of Brussels.

The car was a gift to Canada from the Belgians in 2000, according to Matthew Laird, a member of the Transit Museum Society. It was originally intended to serve the Vancouver Downtown Historic Railway; a heritage streetcar line run by the Society that once operated tourist-friendly excursion trips from Granville Island.

Okay…this is car 4 from Brussels, a former work car converted back to have windows, it was donated by the Belgian govt to to Transit Museum Society. I was at the meeting with the Belgian Consul at Five Sails where the arrangement was made over drinks around 2000. pic.twitter.com/zg6CUGEbGx

During the 2010 Olympics, the line famously hosted a modern Belgian streetcar that was intended to give Vancouverites “a taste of European light rail technology.” Instead, the Vancouver Downtown Heritage Railway was scrapped just months later, leaving the Belgian car purposeless — and vulnerable to vandals and thieves.

In a Facebook post last week, Vancouver transit historian Peter Finch wrote that the car dates back as far back as Belgium’s occupation during the Second World War, and even sustained bomb damage during the conflict.

Finch also cast doubt on the asbestos claim, noting that cars of this vintage used asbestos quite sparingly, and only on select components. “The mention of asbestos is either out of ignorance or an attempt at a scare tactic,” he wrote.