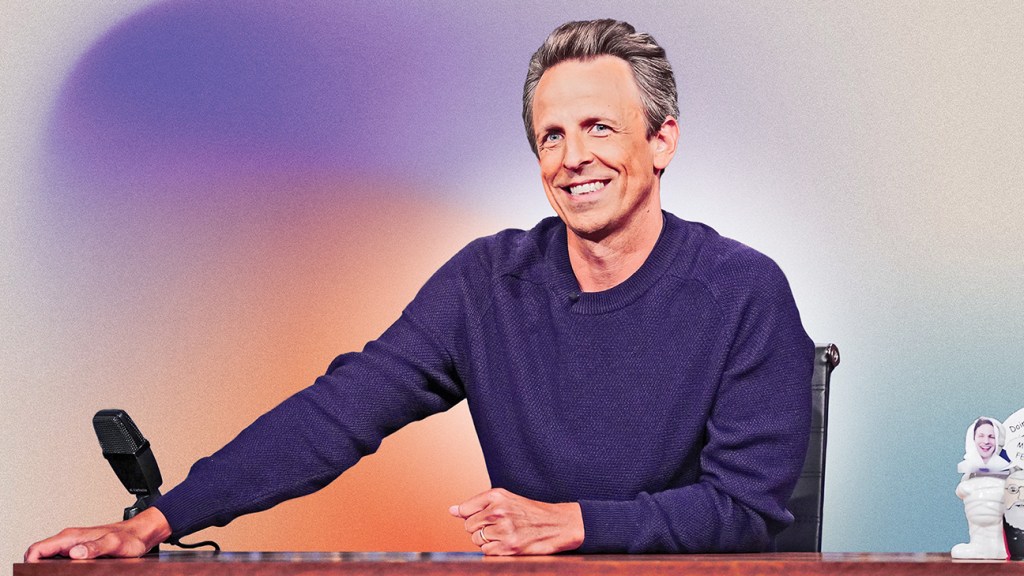 On the day of the Emmy nominations, Seth Meyers left his phone at home and set out for a jog — alone, save for his thoughts. He describes the run as “5 miles of lies.” He spent the time reminding himself of all the reasons being recognized by Television Academy isn’t the most important thing, reasons like his three children. “The whole affair was rather embarrassing,” he tells THR over the phone while preparing for the evening’s Late Night broadcast. “You look back at your list of why it wouldn’t have mattered and are like, ‘Oh boy, it definitely mattered.’ “

Meyers returned to a flurry of congratulatory texts and emails. For the very first time, his version of Late Night was nominated for outstanding variety talk series. The show has been nominated for seven overall Emmys, but he says that this category in particular feels special. “It’s the first time our producers got a nomination, and we obviously couldn’t do this without them,” he tells THR. “As someone who was never good enough to be on an athletic team, to have a day where you’re among a group of people that you consider a team and have something good happen, that is a very nice feeling.”

Ahead of this year’s Emmy nominations, a group of late night producers lobbied the Television Academy to allow five nominees instead of the planned four shows. Do you follow developments like that?

I was definitely aware of it, even though I wasn’t directly involved in the action. Let’s just say there’s no actual proof that we were the fifth of five [nominations], but I feel very lucky that it broke that way. Or it was a sympathy vote because people watching at home thought I’d fallen so far that I could no longer afford a sport coat.

John Oliver’s Last Week Tonight has won the past six years. Can we expect a friendly rivalry there?

He’s so British that he would say he has no idea that he’s won that many. I’m lucky enough to be friends with John, and he was one of the first people to text when we got nominated. And I look forward to sharing what all the other nominees have over the years, which is losing to John.

What markers of success for the show are most important to you?

The funny thing about a nomination is it doesn’t change anything. The show is exactly as hard as it was the night before. And it makes you appreciate that you’re just lucky enough to have a show — it’s far better to have a TV show than to be nominated for one. I feel most grateful that we’ve put together this staff over the years that we feel is the best group we’ve ever had. And that we like working together.

We’re in a time when a lot of people are reconsidering their relationship to work. Do you have any insights as to why you’ve been able to achieve that togetherness?

[Producer] Mike Shoemaker and I were the first two people who started putting the show together, and we had worked together at SNL. We had an appreciation for what goes into creating a writing staff and how you want to look for different voices. If you get five people who are good at the same thing, that’s where resentment is born. If everyone has their own line, and they thrive there, it develops a supportive environment.

If you weren’t the host, what would your lane be?

I would be the writer who was constantly walking down the hallway saying, “I can’t believe they didn’t pick my thing.” That’s a very deft question. I will say that the whole time at SNL my lane was: whatever needed to be done. I weirdly grew into the political cold opens, which would’ve been my last pick for myself when I started. So I’m sort of the cleanup crew. It’s a role I’m well suited for.

You were one of the last hosts to return to pre-pandemic studio audiences. Do you think, overall, the show was fundamentally changed by the past couple of years?

What I learned doing the show for no one was that, as a performer, it’s hard not to think about the 180 people who were in the room with you every night. But when I was doing it alone, I started interacting more with people online to get feedback, and I realized that the ones who watch day in and day out are a far more rewarding audience. You can do a bit on Monday and then call it back on Wednesday. We’re a lot more aware of that non-studio audience in our writing.

In the past year — the Emmy eligibility window, not the calendar year — was there a guest you were really nervous for?

So how did you calm the nerves?

It’s every piece of advice you would give your own children: You just walk out there and be the best version of yourself. When it was over, it was a relief to know that when this is all said and done, it’s an interview I can look back on and it will bring me joy. The risk of these shows is you do so many that you tire of it, but I don’t feel that way at all.

This story first appeared in the Aug. 3 issue of The Hollywood Reporter magazine. Click here to subscribe.