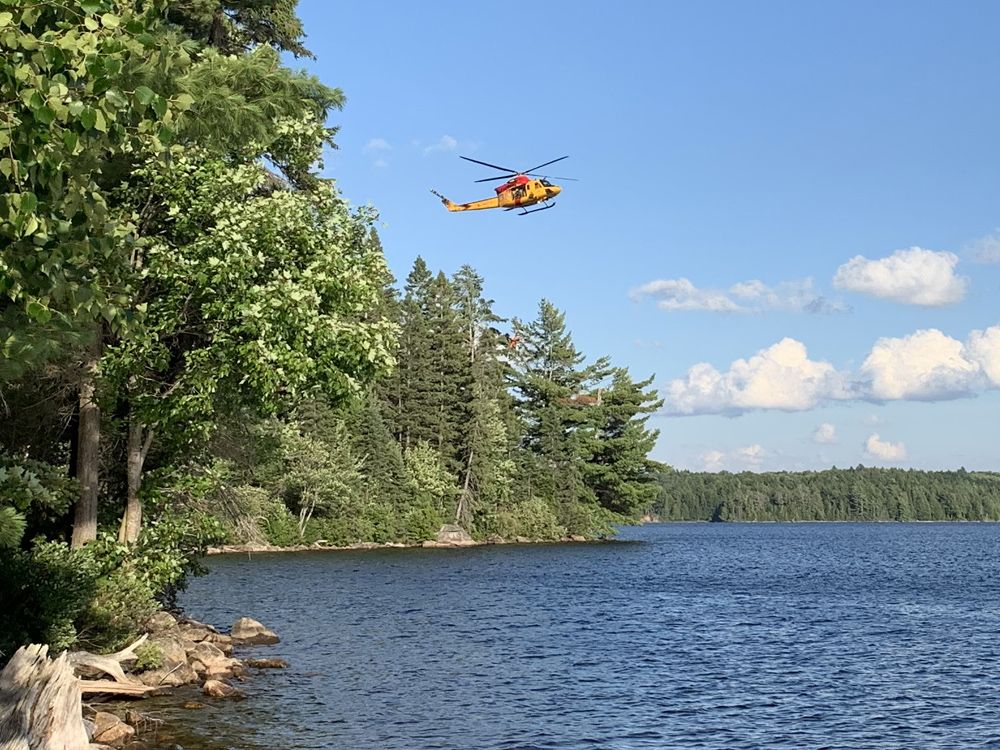 The first thing I saw was the boat on the forest shore, an aluminum dinghy with an expensive looking outboard motor, weird for this lake in the interior of Algonquin Park, but at this moment just disappointing.

“Motorboat does not suggest available campsite in my wilderness language,” I said to my paddling partner, in that half-assed joking and thinking-out-loud way of a canoe tripper far from where he woke up and not yet certain where he will sleep.

Just then, around the point, the campsite came in to view, suddenly uncomfortably close. Half a dozen young people sat on split log benches around a cold firepit, with two people in uniform utility vests.

At a distance, the one who spoke had a cop vibe, like Hank Schrader in Breaking Bad. Why did this guy have a vest on, I wondered. I’m a reporter, I probably should have figured this out, but I was on vacation.

“Hiya. Nice day,” I said. I didn’t see any canoes. Where were their canoes? This was the campsite we were hoping for. Are they maybe leaving? But how would they leave? There’s far too many people for that little motorboat. But then how did they all get here?

Tripping etiquette calls for a hello if you’re in earshot, maybe a nod or wave otherwise, but you should also give people space, ideally more than I was currently giving.

A coldly serious mood had settled on our party, but also confusion

I was finally close to shore after a hard open water crossing against a west wind, and now I was intruding on a tense, private scene.

The man said a friendly hello in reply. No one else did. Not even a flinch of a wave from anyone. That’s unusual. What was going on here?

“That’s your boat?” I tend to babble in awkward moments. The man who spoke said it was.

He asked if we were fishing.

In hindsight, this is about when my sunstroked brain pegged this man as a ranger, not just some guy in a tactical vest.

“Lake trout last night,” I said, stupidly but legitimately excited to boast that we ate it both pan fried and battered with lemon wedges.

I didn’t say, but we camped the night before on the eponymous island in Happy Isle lake, with its cliff-face plaque to the father and son, 53 and 23, both named Van Ness DeLameter, who died there in a hurricane in August 1931.

It ends with the enigmatic line, “ONE WILD AND AWFUL MOMENT. AND THEN. — GOD.”

How big were the fish, the man asked. Two pounders. He wanted to know if we were by ourselves, so I pointed way back at our two other canoes.

I asked if he was fishing too.

Working, huh. This was all so weird and somehow menacing. I didn’t understand. But like I say, I was beat. I kept paddling.

We took the next campsite, not far beyond. One of us remarked on the curiosity of that scene, and we got speculating. Were they getting rousted for some infraction? Should we get our permits out? Was this a sweep? And where were their canoes?

Then we heard the helicopter.

It approached close but passed overhead a few times, as if the pilot could not find them. The two rangers went out in their boat a little ways and started waving. That did the trick.

By now a coldly serious mood had settled on our party, but also confusion. Are the rangers not in radio contact with the chopper? Surely they’re in contact. How else would they both know to be on this lake?

I remember being amazed by the dust cloud over the water. We all had to stand out on a rock offshore to get a good view. We tried to figure it out.

Is this a training exercise? Sure didn’t look like one. Why a military helicopter and not a ministry float plane? Did a plane already take these young campers’ canoes away? But why take canoes before a person? Why take canoes at all?

How did the campers raise the alarm that brought the rangers? Cellular reception or a satellite phone were possibilities. The most obvious, however, is that the two strongest paddlers hustled the length of the lake and over a few portages to reach a lodge, a solid two-hour journey into the wind.

A rescue tech dropped down to the campsite on a rope, a dangerous descent through whipping branches. A second one followed. Then came a stretcher, and the helicopter left, flying south over the rolling highlands.

Why weren’t they leaving immediately? Was someone dead? Or lost in the water? It’s not yet a year since a Toronto high school teacher was acquitted of criminal negligence in the case of Jeremiah Perry, 15, who drowned in 2017 off a campsite on Big Trout Lake, a day’s journey north of here. What horrors were unfolding for the young campers on the next point? We got firewood, mulling it over.

If someone got mauled by a deranged bear, they probably would have said something rather than let us take the next campsite. In the case of general peril, the ranger would never have let me get as far as my trout two ways comment, about which I was starting to feel sheepish. Read the campsite, man.

This was probably an injury and they were preparing for an evacuation. It was a private and personal calamity for people I just happened to pass in the wilderness. It was a wild and awful moment on a sunny summer evening, and none of my business, except that it was happening in front of my uncomprehending eyes.

The helicopter came back. One tech went up with some gear, then the orange stretcher, then the second tech, and then they flew away for good. The rangers left in their motorboat. The sun set and the bugs came out fierce.

The next day, the Joint Rescue Coordination Centre Trenton put out a tweet to say they had taken an injured person from this site to hospital in Muskoka. It included a short video of the same scene from inside the helicopter, the patient safely strapped into the stretcher, and a tech coming up through the pines.

As confusing as they can be to bystanders like myself, dramatic aerial rescues like this are relatively common, especially in high summer, not as unbelievably wild as it seemed at the time. The same 424 Transport and Rescue Squadron did a similar rescue in Algonquin the week before, for example. And on their return to the Trenton air base, they were diverted to rescue four kayakers on the Nottawasaga River.

We left the next morning, our sympathetic deference to the remaining trippers outweighing our curious urge to paddle by the rescue site, which from a distance looked still.

Back at the outfitters, the answer to the canoe mystery occurred to me. To prepare for helicopter rescue, you would have to stash things back in the woods, especially canoes or tents, otherwise they would be blown away.

When I intruded on that baffling wilderness scene, with my clueless oversharing about a fish dinner and my stupid question about whose motorboat that was, that’s probably what they had just finished doing.