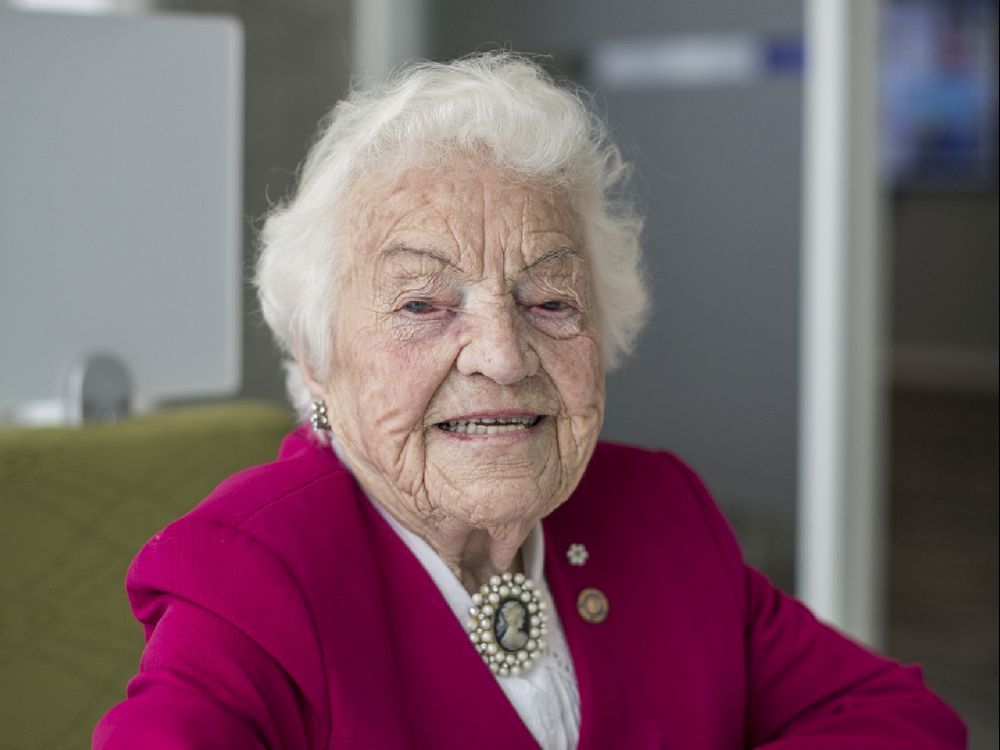 At the age of 97, Hazel McCallion set out to visit some of the world’s busiest airports.

She had just joined the board of the Greater Toronto Airports Authority (GTAA), which operates Toronto Pearson International Airport, and she and another rookie board member, Johan van ’t Hof, were sent abroad to learn about the inner workings of the most successful airports.

At Hong Kong International Airport, the group was taken on a long tour of the baggage conveyors, said van ‘t Hof. They walked five kilometres briskly through the guts of the airport, and then, over drinks back at their hotel, McCallion pondered at length how they could take what they learned back home and improve Pearson.

“It’s astonishing to see the amount of energy she had at 97 years old,” he said.

McCallion is now 101 and has just renewed her GTAA role for another three years. The former Mississauga mayor is booked, in other words, until she’s 104.

And not only at the airport. McCallion is also special advisor to the University of Toronto Mississauga, honorary guardian of the Trillium Hospitals, and chancellor of Sheridan College, among other roles.

“(My mother) would ask me, what do you want to accomplish in life?” says McCallion, a Quebec-born former pro hockey player (she earned $5 a game) who served as mayor for 36 years before retiring in 2014. “Do you want to be a follower or do you want to take advantage of opportunities to be a leader?”

Doug Allingham, chairman of the GTAA board, said the Pearson posting is not a cushy sinecure after a lifetime of service. Their meetings can last eight hours, and McCallion is always prepared and commanding.

“She has a level of credibility that is not matched by anybody else on the board,” he said. “At the end of a discussion … she jumps in with her thoughts or a piece of information that turns the conversation.”

McCallion also serves on the GTAA’s audit committee, chaired by van ‘t Hof. He said he’ll usually get a call in the mornings before a meeting; McCallion will want to go over the hundreds of pages of documents that will be discussed, and she has clearly read every page.

“She’ll say to me, Johan, I see this and I see that, and I’m not sure about this, and what are we doing about that?” he said.

This all sounds very familiar to Bonnie Crombie, the current mayor of Mississauga who served on the city council with McCallion.

“She created the idiom: do your homework,” said Crombie. “I quivered at the thought of not coming to council very prepared and having read thoroughly every document because I know that she had, so we better be prepared for a good debate and discussion.”

Crombie remembers waiting patiently, and nervously, for her turn to speak in meetings as McCallion called on each councillor to say their part on the matter they were discussing that day. After each spoke, they would wait for McCallion to make the “ultimate pronouncement,” said Crombie.

“‘Well, let me tell you what I think,’ she would say,” said Crombie.

When McCallion retired as mayor, she told Crombie she did not want to be a “backseat driver” and was not interested in being involved in city politics, and has largely held true to that promise, keeping busy in other ways.

Another of her current roles is chief elder officer of Revera Inc., which owns and operates retirement residences in Canada, the United States, and the United Kingdom.

Thomas Wellner, Revera’s president and CEO, said McCallion is like the company’s “other CEO.” She is tuned into what the residents want and provides detailed reports on what is working and what is not, he said.

“She has a real way to be able to sit with the residents themselves and listen to their experiences and see things through their eyes,” he said.

He recalls one 2017 meeting in Vancouver, where she gave an evening speech and then was up at 5 a.m. for a flight back to Toronto. He helped carry her bags and watched as people began coming up to McCallion as they made their way to check-in and asked for her autograph.

“I felt like I was with Wayne Gretzky,” said Wellner. “And then we got on the plane and the same thing happened.”

Rajeev Viswanathan, a GTAA board member since 2020, said he once asked McCallion what Revera’s residents ask her when she goes to visit their homes. McCallion told him they want to know the secret to her success.

“There are three things,” she tells them. “You need to have a purpose in life. You need to stay active, mentally and physically. And don’t sweat the small stuff.”

“I tell this story to my girls all the time,” said Viswanathan. “These are great words to live by.”

Still living in her long-time home in Mississauga, McCallion can’t cut her lawn, but she does work in her flower beds. If she finds something around her house that needs fixing, like a wobbly table leg or spotty Wi-Fi connection, she tries to repair it herself.

A busy life, she says, is what keeps her moving forward.

“I want to live life to the fullest, until my very last day on earth.”