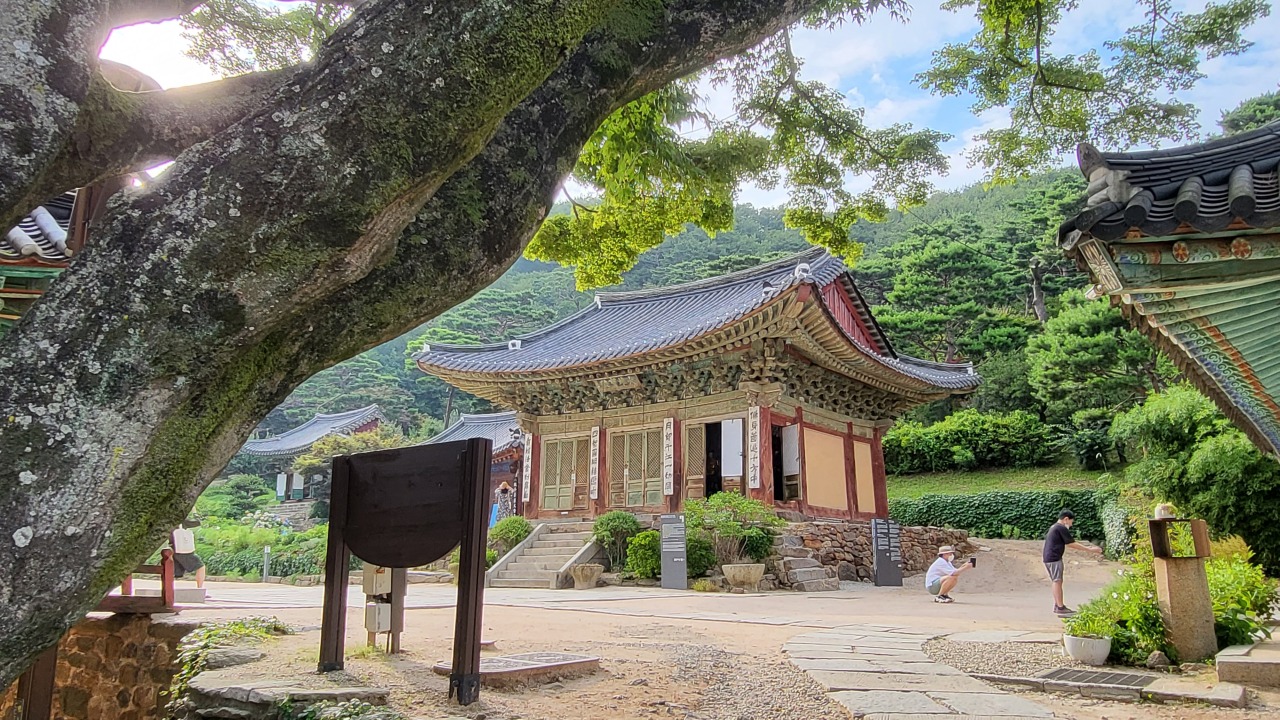 GANGHWADO, Incheon — If you are looking for an escape from the scorching weather that’s under the cool shade, and with a fair view of the sea, sansa –- a mountainside Buddhist temple -– may be just the destination.

Located deep inside mountains, sansa offer visitors a break from the city and the noise that comes with it.

On Ganghwado, an island off the west coast, you will find Jeondeungsa, a temple on Jeongjoksan, a 220-meter mountain. It is about an hour’s drive from Seoul, but a world apart from the bustling capital.

One of the nation’s oldest temples, the history of Jeondeungsa dates back some 1,700 years.

Standing at the entrance, visitors can be overwhelmed by the vastness of the temple compound.

After a 20-minute walk up from the main entrance, you will find wooden buildings, stone pagodas and white lotus lanterns interspersed in a monastic atmosphere.

The Daeungjeon Hall, located at the center of the temple, was established by Buddhist monk Ado in 381 and named Jinjongsa. The place was burnt down and rebuilt in 1621, during the reign of Gwanghaegun, in its current form as Daeungjeon.

Here, you are surrounded by mountains and at the same time have a view of the sea off in the distance.

The iron bell, decorated with two dragons leaning against each other at the top, is situated on the right side of Daeungjeon. According to the engravings on the bell, it was cast at a Buddhist temple in China’s Henan Province in 1097.

The bell was discovered in a military warehouse in Bupyeong, Incheon, toward the end of World War II in 1945. It is thought that the Japanese military took the bell from the Chinese temple to be used as metal scrap and brought it to Korea. A faithful Buddhist moved the bell to its current location in Jeondeungsa.

If you are up for more walking, follow the Culture and Eco Trail that starts at the back of Daeungjeon.

Incheon has designated the trail as a recommended nature path.

After walking some 10 minutes on the seemingly secluded trail, you will come across the site of Jeongjoksan Archive.

Records show that the site used to store the “Joseonwangjosillok,” or “The Veritable Records of the Joseon Dynasty. ”The annals were moved to Seoul in 1910, the year Japan annexed Korea. Today, they are stored at Kyujanggak in Seoul National University in Seoul.

A few steps to the right from the Jeongjoksan Archive site is another storage facility named Seonwonbogak Archive, which kept the royal families’ genealogical records. Although they were destroyed in 1931, illustrated pictures remain as evidence of their existence.

From here, you can continue hiking up Jeongjoksan.

Walking down from Daeungjeon Hall, you will encounter a small temple art gallery with colorful paintings that depict Buddhist philosophies. After viewing the works at the gallery, take the stairs down to Jukrimdawon, a teahouse.

The cafe is spacious and has a garden where you can hear the cheerful chirping of birds and cicadas.

You will notice many people dressed in light pink attire at Jeondeungsa. They are temple-stay program participants.

Jeondeungsa offers a choice of daytime and overnight temple-stay programs. There are no strict rules to follow here, and interpreters are available to help foreign participants upon request in advance.

Savor the taste of the sea in a bowl of kalguksu

Upon exiting Jeondeungsa, you will find a restaurant that serves bajirak kalguksu, hand-cut fresh noodles with clams.

Mirinae Bajirak Kalguksu is located about a seven-minute walk from the temple’s South Gate.

The homey restaurant serves kalguksu with clams and small octopus from nearby.

The noodles are served on a separate dish next to a huge pot full of fresh bajirak. Boil and enjoy the bajirak first, then add the noodles.

The broth tastes rich with the briny taste of the ocean.