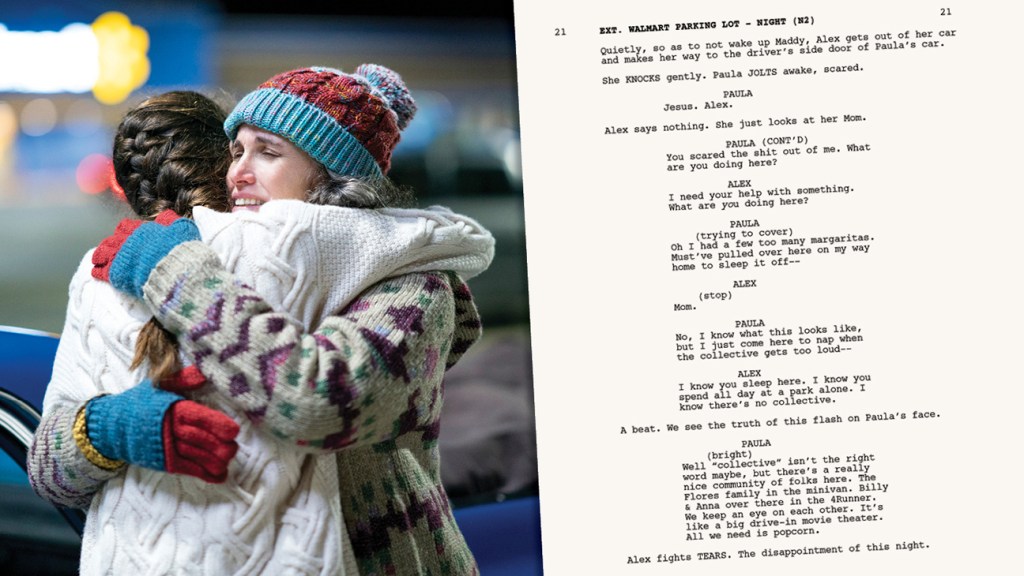 In the final episode of Netflix’s limited series Maid, protagonist Alex (Emmy nominee Margaret Qualley) confronts her mother, Paula (Qualley’s real-life mom, Andie MacDowell), who is homeless and in the throes of a mental health crisis. In this scene, Alex follows her mother to Walmart, where she discovers Paula is living out of her car. Emmy-nominated creator Molly Smith Metzler breaks down the tough, emotional scene between mother and daughter.

“Alex arrives in this scene emotionally gutted and ripped open,” says Metzler. “It’s so hard for her to tell the truth in this moment and to admit just how fucked they both are.” There was a lot of subtext in Alex for Qualley to convey as well. “Margaret brought this sense that this was [Alex’s] future — this is something you inherit when you’re someone like Alex. Mental illness is inherited. Homelessness and cycles of abuse can be inherited. So much of this moment is her looking at her own future and saying, ‘No.’ ”

“I was nervous to write [this scene] because any time you are confronting someone you love who’s mentally ill, you are forcing a reality that’s very difficult to look at,” says Metzler. The showrunner says a lot was leading up to this scene, which requires Alex to acknowledge the difficult time Paula is going through, and also acknowledge how it negatively impacts her own life. “Alex wills this scene to happen, and it’s a real sign of what she’s about to do to change her life.”

Paula’s overly cheery attitude here barely belies her mental illness. “There’s something childish about Paula [and] the way she’s chosen to cope with her life,” says Metzler. “She spins everything to be more colorful and brighter than it is.”

Metzler, who is also a playwright, says that a dialogue-heavy scene like this is her favorite kind to write. “Cornering characters is really fun,” she says. “It’s my favorite place to write from, especially a scene like this where we’re raising the stakes for Alex’s final challenge.”

Paula’s cheeriness heightens the tension of the scene, forcing Alex to finally confront her and have her admit the truth. “Alex is saying, ‘No, you’re going to see this for what it is. You’re going to say these words: I’m living in my car,’ ” says Metzler. “It reminds me of saying goodbye to your child at college, except Paula is the kid and Alex is the one who’s going to leave her in the dorm.”

Metzler finished writing this episode while shooting was underway, and she knew that both Qualley and MacDowell would nail the scene. “There was just something really special about working with a mother and daughter,” she says, “but they are extraordinary actors, and they were going to do whatever was needed. It was very brave, and I learned so much about the craft of acting from watching the two of them. [Those of us who were] standing in a Walmart parking lot in the middle of the night, watching this … we all knew that something very powerful was happening between these two actors.”

This story first appeared in an August stand-alone issue of The Hollywood Reporter magazine.