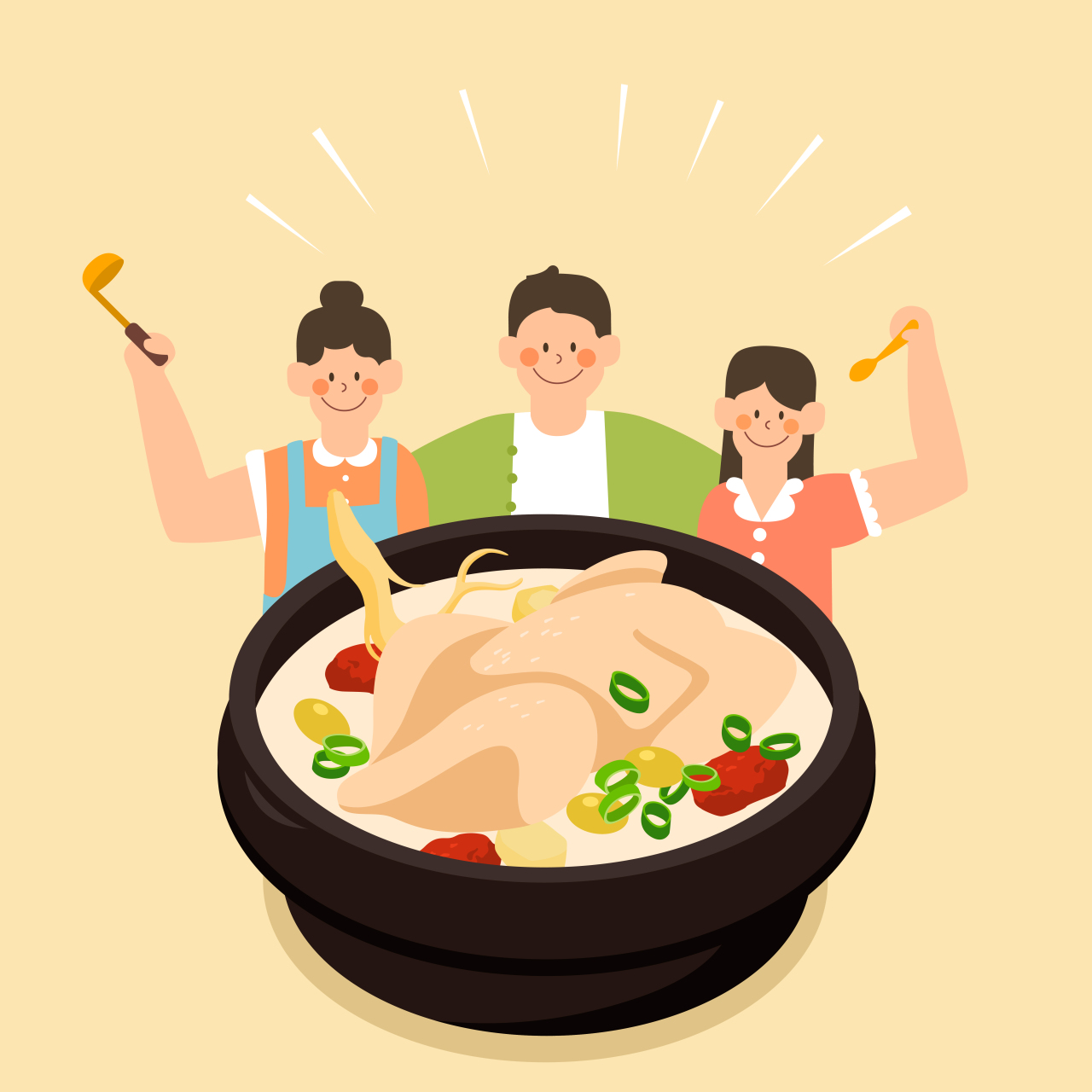 Koreans mark the three hottest days of the summer season, known as “boknal.” Those days are called “chobok,” “jungbok” and “malbok.”

During boknal, Koreans look for boyangsik, dishes with high nutritional value, to reenergize themselves for the dog days of summer.

Long lines form at popular samgyetang restaurants on the three hottest days, and it is not uncommon to find many closing earlier than usual, having sold out.

There are several boyangsik dishes that people turn to help them cope with the summer heat other than samgyetang, such as a steaming bowl of chicken soup with ginseng- and-glutinous rice-stuffed whole chicken. Fish dishes such as chueotang (loach soup), mineojjim (steamed Chinese drum fish) and jangeogui (grilled eel) are also popular dishes deemed tonic for the body.

“According to ‘Donguibogam’ (a medical book written by royal physician Heo Jun in 1963), mineo has a warm temperature, so it delivers energy to our intestines which are likely to get colder during the summer season,” Kang Min-gi, a doctor of Korean medicine at Gyeonggi Province, told The Korea Herald.

Kang explained that body temperature drops during the summer due to greater consumption of cold food and frequent exposure to air conditioning, resulting in various illnesses stemming from an imbalance between one’s body temperature and the outside temperature.

The field of constitution-based medicine focuses on the temperature of the main ingredient of a dish, according to Kang.

“In the case of chueotang, chueo does not have a set temperature, so it can do good regardless of body type or season. Chueo is also high in calcium, vitamin A and vitamin D, which strengthens one’s immunity. Records show that our ancestors enjoyed chueotang in both summer and winter.”

If you are looking for a boyangsik place to visit in time for the last boknal of the year, malbok, which falls on Aug. 15 this year, here are two restaurants in Seoul.

Despite the name samgyetang, meaning ginseng and chicken soup, there is no ginseng in this chicken soup dish. Also absent is the glutinous rice stuffing.

Dried neungi mushrooms are used in making the broth, and the dish is topped with chopped green onions and Korean chives.

The neungi samgyetang starts with a clean scent of savory and sweet mushrooms. But as you dig into the chicken, the flavor of the meat naturally blends deeply into the soup, adding a thickness to the broth.

A small dish of roasted sea salt is provided for dipping pieces of soft and chewy chicken. A bowl of sticky rice is served alongside the chicken soup.

According to the restaurant manager, this prevents glutinous rice from becoming too watery. It also allows customers to eat the rice as they like it — eating it on its own with other side dishes or adding it into the soup.

For those who make reservations on weekdays, a small complimentary glass of wild ginseng wine is served at the start of the meal.

Considered one of the most prized fish and served to the king on ceremonial occasions, a mineo dish was also served during the inter-Korean summit in 2018.

A restaurant that specializes in mineo, Yejeon Myeongga stands on the first alley on the right from Euljiro 3-ga Station Exit No. 1.

“Our mineo, which is served raw, comes from Mokpo, and our semi-dried mineo for mineojjim comes from Gangjin, both in South Jeolla Province,” Yejeon Myeongga’s head chef told The Korea Herald.

Because mineo is a warm current fish, raw mineo tastes best during the summer season, typically from July to mid-August, whereas mineo dried in the natural ocean wind can be enjoyed round the year, the chef explained.

Topped with julienned onion and some red and green pepper as garnishes, the texture of mineojjim is similar to that of steamed sea bass, soft in texture.

The mineojjim takes longer to prepare, so those ordering mineojjim should call the restaurant 20 minutes before the visit.

Mineojjim and mineotang are both priced at 25,000 won for lunch.