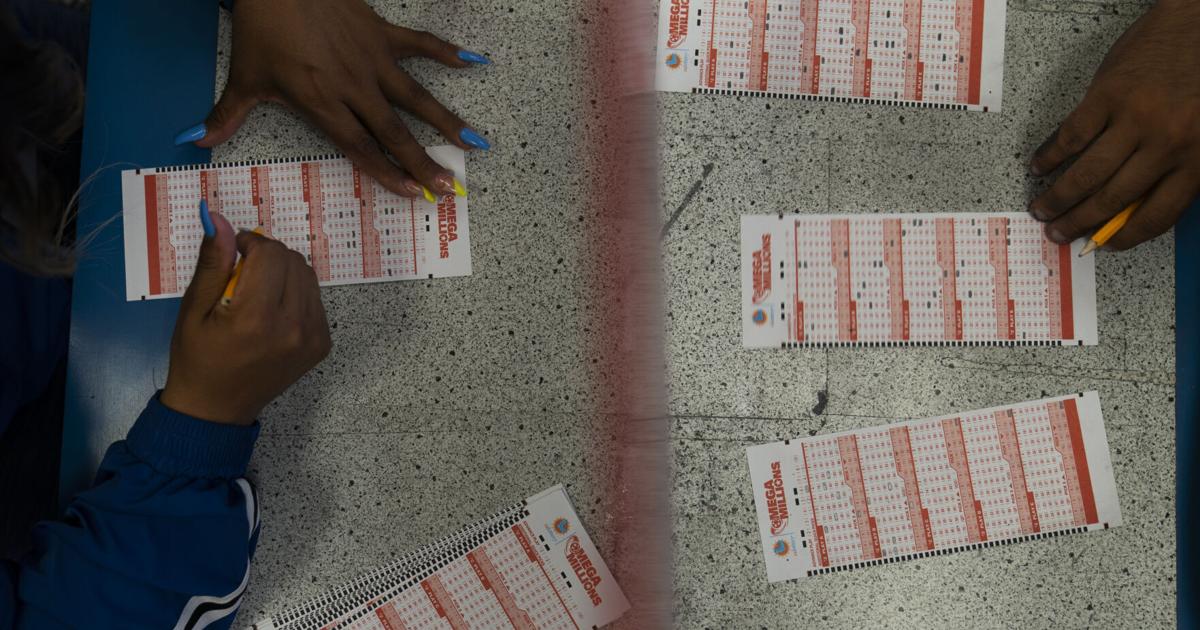 Here’s a look at trending news for today, July 26:

The chances are steadily rising that someone will win the massive $830 million Mega Millions jackpot on Tuesday night, but will it be you?

That’s because while the nation’s fourth-largest lottery prize has sparked a surge in sales that will mean more possible number combinations are covered, your odds of winning remain the same. At 1 in 302.5 million, they’re pretty miserable.

Tom Brady is getting another big target to make another run at the Super Bowl.

The Bucs are signing former Falcons and Titans receiver Julio Jones to a one-year contract, the Tampa Bay Times confirmed.

Jones, 33, was traded from the Falcons to the Titans last season but was placed on injured reserve with a hamstring strain after producing his only receiving touchdown in Week 18 against the Texans.

But the seven-time Pro Bowl player is considered one of the best pass catchers in NFL history with 13,330 receiving yards and 61 career touchdowns.

Tony Dow, who delighted audiences as big brother Wally Cleaver on the 1950s and ’60s sitcom “Leave It to Beaver,” is still alive in hospice care, despite his own management team posting on social media Tuesday that he had died.

The actor announced in May that he was battling cancer, and in an update last week, Dow’s management team said he was experiencing complications from the disease.

Dow’s representatives announced on his Facebook page that he had died, causing news outlets worldwide, including the Daily News, to report his death.

The intensifying rivalry between former President Donald Trump and his once fiercely loyal vice president, Mike Pence, has been put on stark display in Washington. The two gave dueling speeches Tuesday on the future of the Republican Party. Trump, in his first return to Washington since Democrat Joe Biden ousted him from the White House, repeated the false election fraud claims that sparked the Jan. 6 Capitol insurrection. Pence, in a separate address, implored the party to move on from Trump’s defeat. Both men have been laying the groundwork for expected presidential runs in 2024.

President Joe Biden is decrying his predecessor for failing to try and stop the deadly Jan. 6 mob attack on the Capitol, saying “Donald Trump lacked the courage to act.” Biden remains in isolation in the family quarters of the White House after testing positive for COVID-19 last week. He has previously criticized Trump for helping to incite the 2021 riot. But his comments in a prerecorded speech Monday to the National Organization of Black Law Enforcement Executives’ annual conference in Orlando, Florida, were the clearest link Biden has made between Trump and the insurrection since a special House committee investigating the attack on the Capitol began holding hearings in June.

The latest Russian court hearing in the drug trial of American basketball star Brittney Griner has focused on testimony about countries that regard cannabis as having legitimate medicinal uses. Griner has acknowledged she was carrying vape canisters containing cannabis oil when she was arrested in February at a Moscow airport. But she contends she had no criminal intent and that the canisters ended up in her luggage inadvertently because of hasty packing. Griner, a two-time Olympic gold medalist who plays for the WNBA’s Phoenix Mercury, faces up to 10 years in prison if convicted of transporting drugs. Griner’s trial began July 1. Tuesday’s session lasted about 90 minutes before the case was adjourned until Wednesday.

Russia has targeted Ukraine’s Black Sea regions of Odesa and Mykolaiv with air strikes, hitting private buildings and port infrastructure. Ukraine’s military said that the Kremlin’s forces used air-launched missiles in Tuesday’s attack. In the Odesa region, a number of private buildings in villages on the coast were hit and caught fire, the report said. In the Mykolaiv region, port infrastructure was targeted. Hours after the renewed strikes on the south, a Moscow-installed official in the southern Kherson region said the Odesa and Mykolaiv regions will soon be “liberated” by the Russian forces, just like the Kherson region further east.

Temperatures hit 102 degrees Fahrenheit in Portland, Oregon, on what was expected to be the the hottest day of an unusually long heat wave for the Pacific Northwest. That was a new daily record for July 26 for Oregon’s largest city. Elsewhere in the region, Seattle also reported a new record daily high of 94 degrees on Tuesday. Forecasters have issued an excessive heat warning for parts of Oregon and Washington state, prompting Oregon Gov. Kate Brown to declare a state of emergency. Portland and Seattle officials have opened emergency cooling shelters. The National Weather Service predicts Portland could break its previous heat wave duration records of six consecutive days that are 95 degrees or warmer.

Firefighters have significantly slowed the spread of a smoky wildfire burning near Yosemite National Park that has destroyed 55 homes and other buildings. But thousands of residents of remote California mountain communities are still under evacuation orders. An incident report Sunday night says crews made good headway against the Oak Fire. More than 2,500 firefighters are battling the blaze and contending with steep terrain and hot weather. Smoke from the fire has reached the San Francisco Bay Area and Nevada. Officials say there was explosive fire behavior on Saturday with flames running through bone-dry vegetation caused by the worst drought in decades. The blaze by Monday morning had consumed more than 26 square miles of forest.

Officials say a grass fire apparently sparked by a mower in a suburban Dallas open field swept a few hundred yards almost instantly to a row of homes in a subdivision, setting as many as 20 on fire. The Monday afternoon fire just off Interstate 20 in Balch Springs. There were no immediate reports of injuries. Firefighting teams have thrown dozens of extra crew members into the fight against a North Texas wildfire that has destroyed 16 homes and damaged five others. The crews have held the Chalk Mountain Fire effects in check Monday at 10 1/2 square miles (27 1/4 square kilometers) since last week.

An increasing number of Republican officials are defending House Speaker Nancy Pelosi and her reported trip to Taiwan. They are urging President Joe Biden to stand up to China amid threats from Beijing of a forceful response if Pelosi goes ahead with a visit to the self-governing island later this summer. Pelosi’s supporters include a conservative Republican senator and at least two former Trump administration officials. The reported trip has opened up an unusual rift between the White House and the speaker’s office, although neither side has challenged the other directly. Pelosi has yet to confirm a trip is in the works.

Pope Francis has apologized for the Catholic Church’s cooperation with Canada’s “catastrophic” policy of Indigenous residential schools. The pontiff says the forced assimilation of Native peoples into Christian society destroyed their cultures, severed their families and marginalized generations in ways still being felt today. Francis spoke Monday near the site of the former Ermineskin Indian Residential School, on lands of four Cree nations south of Edmonton, Alberta. He said, “I humbly beg forgiveness for the evil committed by so many Christians against the Indigenous peoples.” The long-awaited apology opens Francis’ weeklong “penitential pilgrimage” to Canada, which is meant to help the church on its path of reconciliation with Indigenous peoples and help victims heal.

Authorities say a woman fired several gunshots, apparently at the ceiling, inside of Dallas’ Love Field Airport before an officer shot and wounded her. Dallas police Chief Eddie Garcia said at a news conference that the woman was dropped off at the airport Monday morning, walked inside and entered a bathroom. He says she emerged wearing clothing she hadn’t arrived in, pulled a gun and fired several shots, apparently at the ceiling. Garcia says an officer nearby shot the woman in her “lower extremities,” wounding her and enabling her to be taken into custody. Police say the suspect, identified as 37-year-old Portia Odufuwa, was taken to a local hospital for treatment.

The attorney for the principal of the Texas elementary school where a gunman killed 19 students and two teachers says the principal has been placed on administrative leave. Mandy Gutierrez’s attorney Ricardo Cedillo of San Antonio says Uvalde school Superintendent Hal Harrell placed the Robb Elementary School principal on paid administrative leave Monday. A legislative committee blamed Gutierrez and an assistant for knowing a lock to the classroom where the killings happened May 24 wasn’t working. Also Monday, the district school board approved a three-week postponement of the start of the district school year until Sept. 6.

Conspiracy theorist Alex Jones is set to face a defamation trial over his false comments that the 2012 Sandy Hook Elementary School massacre was a hoax. A jury was selected Monday in Austin, Texas. Courts have already found the Infowars host liable for his portrayal of the Newtown, Connecticut, shooting that killed 20 first graders and six educators as a hoax involving actors. At stake for Jones is another potentially major financial blow that could put his constellation of conspiracy peddling businesses into deeper jeopardy. Family members of the shooting victims and Jones were not in the courtroom Monday. Jones’ attorney, Andino Reynal, said his client has a “medical issue,” though he didn’t elaborate. Opening statements are set for Tuesday.

TBS is canceling “Full Frontal With Samantha Bee” after seven seasons, removing a rare female voice from late-night TV. The channel in a statement Monday says it has made to make some difficult but business-based decisions as part of its new programming strategy. TBS was part of WarnerMedia, which merged with Discovery Inc. last April  to become the new Warner Bros. Discovery company. TBS praised the show’s “groundbreaking work” and says it will explore ways to work with the cast and crew in the future. Bee was the host and a producer of “Full Frontal.” Her representatives didn’t respond to a request for comment.