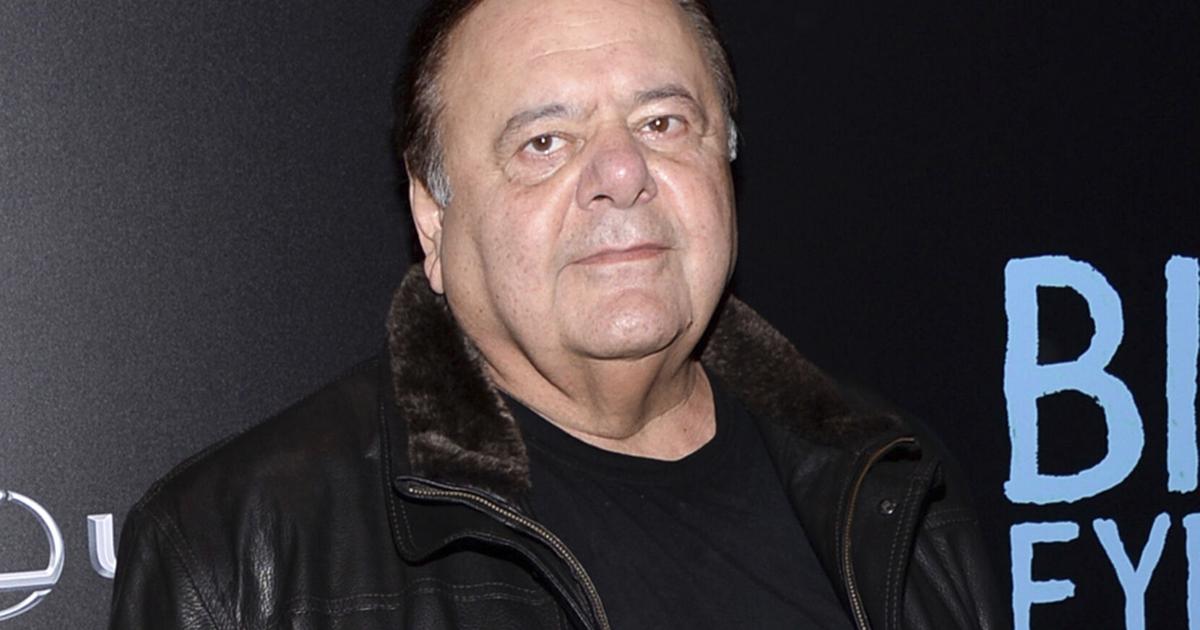 Here’s a look at some trending topics for today, July 25.

Paul Sorvino, an imposing actor who specialized in playing crooks and cops like Paulie Cicero in “Goodfellas” and the NYPD sergeant Phil Cerreta on “Law & Order,” has died. He was 83.

His publicist Roger Neal said he died Monday morning of natural causes at the Mayo Clinic in Jacksonville, Florida. Sorvino had dealt with health issues over the past few years.

“Our hearts are broken, there will never be another Paul Sorvino, he was the love of my life, and one of the greatest performers to ever grace the screen and stage,” his wife, Dee Dee Sorvino, said in a statement.

Read more about him here:

David Warner, a versatile British actor whose roles ranged from Shakespearean tragedies to sci-fi cult classics, has died. He was 80.

Warner’s family said he died from a cancer-related illness on Sunday at Denville Hall, a retirement home for entertainers in London.

Often cast as a villain, Warner had roles in the 1971 psychological thriller “Straw Dogs,” the 1976 horror classic “The Omen,” the 1979 time-travel adventure “Time After Time” — he was Jack the Ripper — and the 1997 blockbuster “Titanic,” where he played the malicious valet Spicer Lovejoy.

A 37-year-old woman fired several gunshots, apparently at the ceiling, inside of Dallas’ Love Field Airport on Monday before an officer shot and wounded her, authorities said.

The woman was dropped off at the airport at about 11 a.m., walked inside near the ticketing counters and entered a bathroom, Dallas police Chief Eddie Garcia said at a news conference. She emerged wearing a hooded sweatshirt or some other clothing that she hadn’t arrived in, pulled a gun and fired several shots, apparently at the ceiling, he said.

“At this point, we don’t know where exactly the individual was aiming,” Garcia said.

An officer nearby shot the woman in her “lower extremities,” wounding her and enabling her to be taken into custody, Garcia said.

Los Angeles police are searching for people involved in a gang-related weekend shooting at a park that left two men dead and six people wounded. The city’s police department says the shooting happened Sunday afternoon at Peck Park in the city’s San Pedro neighborhood. Capt. Kelly Muniz says a dispute preceded the gunfire. Police don’t know what started it or how many people opened fire. No arrests have been made. Officials say the six people wounded were two men and four women and all are in stable condition. Police found multiple guns at the location. No information has been disclosed about suspects.

A day after arriving in Canada, Pope Francis is scheduled to go to the small Alberta prairie town of Maskwacis to deliver a historic apology. He’ll apologize for abuses and cultural repression of Indigenous children at Catholic-run residential schools across Canada in the 19th and 20th centuries. The Canadian government coordinated the schools in a policy to weaken Indigenous people’s identity and resistance to land grabs. Catholics ran most of the schools, and Protestants operated others. Thousands of school survivors and their supporters are expected at the ceremony. Francis arrived Sunday in Edmonton for a week-long trip that will also take him to Quebec City and the far-north territory of Nunavut.

About 2 in 3 Americans say they favor term limits or a mandatory retirement age for Supreme Court justices. That’s according to a new poll that finds a sharp increase in the percentage of Americans saying they have “hardly any” confidence in the court. The poll from The Associated Press-NORC Center for Public Affairs Research finds 67% of Americans support a proposal to set a specific number of years that justices serve instead of life terms, including 82% of Democrats and 57% of Republicans. The poll was conducted just weeks after the high court issued high-profile rulings stripping away women’s constitutional protections for abortion and expanding gun rights.

City residents in the Northeast are fleeing a hot spell in favor of pools, beaches and forests. Several New York City residents sought refuge Sunday at a Pennsylvania state park in the Pocono Mountains. The region is bracing for potentially record-breaking temperatures and dangerous heat. The National Weather Service says more than 85 million Americans are under excessive heat warnings or heat advisories, from the Pacific Northwest to the southern Great Plains to the heavily populated Interstate 95 corridor. Athletic events were shortened or postponed, and cities opened cooling centers.

Taiwan’s capital is staging air raid drills and its military is mobilizing for routine exercises. The display is coinciding with concerns over a forceful Chinese response to a possible visit to the island by U.S. Speaker of the House Nancy Pelosi. There was no direct link between China’s threats and Taiwan’s civil defense drills. But along with the mobilization of planes, tanks and troops, they underscore the possibility of a renewed crisis in the Taiwan Strait, considered a potential hotspot for conflict that could envelop the entire region. Pelosi has not confirmed when, or even if, she will visit, but President Joe Biden last week told reporters that U.S. military officials believed such a trip was “not a good idea.”

Conspiracy theorist Alex Jones is set to face a defamation trial over his false comments that the 2012 Sandy Hook Elementary School massacre was a hoax. A jury was selected Monday in Austin, Texas. Courts have already found the Infowars host liable for his portrayal of the Newtown, Connecticut, shooting that killed 20 first graders and six educators as a hoax involving actors. At stake for Jones is another potentially major financial blow that could put his constellation of conspiracy peddling businesses into deeper jeopardy. Family members of the shooting victims and Jones were not in the courtroom Monday. Jones’ attorney, Andino Reynal, said his client has a “medical issue,” though he didn’t elaborate. Opening statements are set for Tuesday.

Myanmar has carried out its first executions in nearly 50 years, hanging a former lawmaker, a democracy activist and two other political prisoners who had been accused of a targeted killing after the country’s military takeover last year. The executions announced Monday were carried out despite worldwide pleas for clemency for the four. State media said they planned, directed and organized terrorist killings. Opposition figures and rights activists say their convictions were politically motivated and condemned the executions while Myanmar rejected all criticism. The wife of one of the prisoners urged the world to hold Myanmar’s military leadership accountable. U.N. human rights chief Michelle Bachelet said she was dismayed by “this cruel and regressive step.”

Sydney McLaughlin took the last victorious lap of an all-American world championships. She pulled away in the 4-by-400 relay to close a U.S. runaway and give the Americans their record 33rd medal for the meet. McLaughlin turned a .73-second lead into a 2.93-second runaway on the anchor lap, adding this burst of speed to the world record she set two nights earlier in the 400 hurdles. Two more world records went down — in the very first and very last action of the last session at Hayward Field. Nigeria’s Tobi Amusan opened the evening by setting the record for the 100-meter hurdles in the semifinals: 12.12 seconds. And, pole vaulter Armand Duplantis of Sweden cleared 6.21 meters (20 feet, 4 1/2 inches) to best his world record.

Jonas Vingegaard of Denmark has won his first Tour de France title after coming out on top in a thrilling three-week duel with defending champion Tadej Pogacar. The 25-year-old Vingegaard became the first Danish rider to win cycling’s biggest race since Bjarne Riis in 1996. Vingegaard was runner-up to Pogacar last year. The former fish factory worker built his success in the mountains. As well as overall victory Vingegaard also claimed the jersey for king of the mountains. Jasper Philipsen won Sunday’s last stage around Paris to the Champs-Elysees in a sprint.

Former Boston Red Sox slugger David Ortiz was inducted into the Hall of Fame as legions of fans cheered him. They chanted “Papi! Papi!” from the lawn outside the Clark Sports Center in Cooperstown, New York, and countless flags of his native Dominican Republic wafting in the breeze. Dressed in a blue suit with a red tie, Ortiz spoke from his heart, thanking all of those along the way that made his Hall of Famer journey possible.  Six Era Committee selections also comprised in the Class of 2022 — former Twins teammates Jim Kaat and Tony Oliva, the late Minnie Miñoso, former Dodgers star and Mets manager Gil Hodges, and Black pioneers Buck O’Neil and Bud Fowler.

First-place finisher Denny Hamlin was disqualified when his No. 11 Toyota failed inspection, giving Chase Elliott the NASCAR Cup Series victory Sunday at Pocono Raceway. Joe Gibbs Racing had Hamlin’s car and runner-up Kyle Busch’s No. 18 Toyota both disqualified. Hamlin lost his record seventh victory at Pocono and his third win of the season. Busch had led a race-high 63 laps. There was no immediate word why the Toyotas were disqualified. Elliott, who had finished third, was given his fourth win of the season. NASCAR believed the last time it disqualified an apparent winner was April 17, 1960, when Emanuel Zervakis’ victory at Wilson Speedway in North Carolina was thrown out because of an oversized fuel tank.