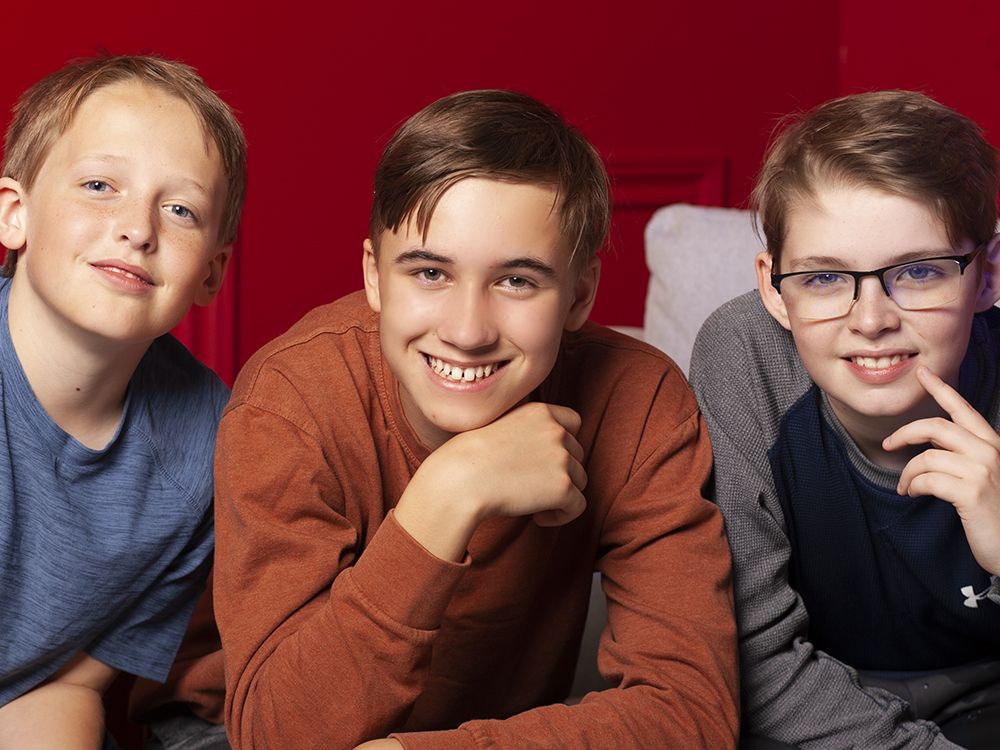 They’re only teenagers but they’ve interviewed actors like Ryan Reynolds, Steve Martin and Henry Winkler, and everyone from the chair of Immunize Canada to a storm chaser.

Jack Charron, Nathan Cox and Ben Peters are The Interview Dudes, three best friends from Ottawa who started a podcast “as a joke” in 2019. They were just 11 years old and their first guest was James Charron, a voice actor and Jack’s father, who also produces the show. Three years, 12 seasons and more than 100 episodes later — including a stint as the number two Kids and Family podcast in Canada in 2020 — the teens have proven adept at interviewing all kinds of people, even former U.S. Ambassador Bruce Heyman.

James Charron said now they get more requests to come on the podcast than they can accommodate.

“We have to turn down a lot of people,” he said.

They’ve already convinced Jurassic World actress Bryce Dallas Howard to come on the show (they just need to set the date). They’re also pursuing Taika Waititi and Mark Hamill on Twitter, among others.

OK! We can’t hold it in anymore! We are working on an interview date with @BryceDHoward, which we hope to be able to make it work for her and our schedule. Thanks Bryce, hope we can make it happen! pic.twitter.com/4LvpMscZLa

“I really like the Star Wars movies. He’s an actor that I watch a lot. So, I just wanted to see what he thinks of his character (Luke Skywalker) in Star Wars,” said Jack, 13.

They’ve even received some help pursuing Hamill from previous guests.

“You know you want to do it,” tweeted Dragon’s Den celebrity investor Arlene Dickinson.

“Mark, you will so enjoy talking to these three,” wrote Winkler, the star of Happy Days and Barry.

The idea for the show came in early 2019. Jack and his dad were listening to podcasts on their drive from Toronto back to Ottawa. Jack thought podcasting might be something fun for him to try. He convinced his friends Ben and Nathan to join, and they recorded their first episode using James Charron’s voice acting equipment.

“It all started just as a joke,” said Jack.

“To be honest, I didn’t really have anything to do so I joined just for fun, and we’ve been going ever since,” said Nathan.

Now the boys take their interviews seriously. Each conversation is different, but the focus is on their guests’ jobs.

Ben said they all prepare their questions separately in a Google doc.

“It usually takes me maybe like 20 to 30 minutes. Sometimes I’d get distracted,” he said.

They spend a lot of time researching each guest’s field of work and trying to figure out the best way to engage their audience.

When they interviewed glaciologist Peter Neff, their first question was: “How hot were you when you came back from Antartica, in Washington?” In their interview with Rod Black, they got the TSN commentator to reveal his on-air mishaps — including the time he swallowed a fly.

Steve Martin shared the time it took four hours to shoot a scene for Dirty Rotten Scoundrels because his co-stars could not stop laughing at each other. Henry Winkler said he hopes to play a mute character one day. “I would like to create a character without ever using words, just my body and my feelings,” he said.

Interviewing Ryan Reynolds was a dream come true for the boys.

“I just had a smile the whole time,” Ben said. “With these big celebrities it’s just so hard to hold back the excitement that I focus all the excitement into my smile.”

In the interview, Reynolds discussed how he was able to play Pikachu using performance capture in the live-action Pokemon movie Detective Pikachu. His body was covered in tracking dots and cameras so that every movement and micro-expression was mapped and transferred to the Pikachu character onscreen. He said he was impressed but also pretty worried by the end of shooting because his body was mapped so thoroughly that a technician said: “You could just die and we could still make movies with you.” Reynolds immediately had a contract drawn up so that even if he was “struck by lightning tomorrow” he wouldn’t suddenly be “starring in Van Wilder 7 in 2030.”

Carey has been researching adolescent behaviour for years and says Generation Z is one that has combined the power of technology with their desire to make change.

“I don’t think we have seen a generation with so many strong opinions — and such a sense of empowerment — since the 60’s,” she said.

Kantar, a data analytics company, reported that around 71 per cent of Gen Z in Canada are looking forward to making a difference in the world through the decisions they make and actions they take.

“I love seeing these boys develop. I’m super proud of these three kids, and however long we continue with it, it’s totally up to them,” said James.

They plan to take the podcast season by season. When asked about the future the boys all simply said, “Hopefully we’ll still be on the Interview Dudes.”