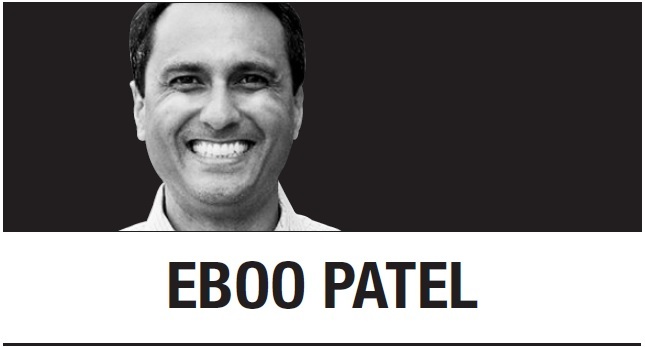 In my early years as an activist, I thought social change was about calling out all the ways that people in power were wrecking the world. Finding my voice meant telling other people what they were doing wrong, as loudly and self-righteously as possible.

I came of age in the mid-1990s, an era where the activist atmosphere had profound similarities to today. I recognize the “tear it down” energy of our moment, the critique-resist-defund-dismantle worldview.

I brought my own version of that attitude to a conference on religion and diversity in the late 1990s. I had come seeking the skin-on-the-line justice commitment of faith-based radicals like Dorothy Day, Bayard Rustin and Malcolm X. Instead, I found old, white, male theologians pontificating from panels.

I knew exactly what to do. I stood up, raised my fist and called them out. “Where are the young people?” I shouted. “Where is the social action? Where is the true diversity?”

There was polite applause from the audience. I imagine they thought that would be the end of it. Often, the easiest way to dismiss young activists is to commend their critique.

One adult lingered and approached. “Sounds like you have a vision for an interfaith organization full of young people and focused on social action. That’s powerful. You should build that.”

That stopped me in my tracks. Lots of adults had encouraged me to resist the regime, but very few had taken me seriously enough to help me articulate a vision for something new and then challenged me to build it.

I’ve spent the last 20 years doing just that. The institution that I’ve built, Interfaith America (founded as Interfaith Youth Core), is about helping the United States achieve its potential as a religiously diverse democracy — with a true range of young people playing a central role. In the past two decades, I have found myself constructing more than critiquing and collaborating more than opposing. My work has been characterized more by an outstretched hand than a raised fist.

I have learned an awful lot along the way. It is one thing to critique people in power and another thing to be the one in charge, responsible for the welfare of others. Do people’s lives improve when you are the one running things? Is there less violence, better education, higher wages, more happiness? That’s the real test of effective activism.

Our world needs social change agents who recognize that if you pull the pilot out of the cockpit, you had better know how to fly the plane because there are a lot of people counting on you for a safe landing.

To paraphrase the counsel George Washington gave Alexander Hamilton in Lin-Manuel Miranda’s musical “Hamilton”: Defeating the old regime is easy; building the new system is hard. Getting rid of bad things doesn’t ensure that better things will take their place. I’m a religious person, so I do actually believe there’s a better system waiting in heaven. But it will not magically descend to earth if you destroy the current system. Surely the world has seen enough Maximilien Robespierres and Ayatollah Khomeinis to know that.

It is possible to protest bad things out of existence, but if you want to bring a good thing into existence, you need to build that.

Indeed, it is harder to organize a fair trial than it is to fire up a crowd; harder to run a successful school than it is to tell other people that they are doing education all wrong; harder to sustain alternatives to policing that ensure public safety than it is to chant slogans in the street. And yet, every decent society needs fair trials, good schools and public safety, and that’s just the beginning of the list of institutions and structures that need to be efficiently erected and effectively run in a large-scale diverse democracy.

As American political analyst Yuval Levin writes in the book “A Time to Build”: Institutions are “the durable forms of our common life. They are the frameworks and structures of what we do together. … The institution organizes its people into a particular form moved by a purpose, characterized by a structure, defined by an ideal, and capable of certain functions.”

The good society is defined by effective institutions networked together toward a just and inclusive vision.

Who will take responsibility for building these better institutions? How about you?

After all, the goal of social change is not a more ferocious revolution; it is a more beautiful social order. We need to defeat the things we do not love by building the things we do.

Eboo Patel
Eboo Patel is the founder and president of Interfaith America and the author of the new book “We Need To Build: Fieldnotes for Diverse Democracy.” He wrote this for the Chicago Tribune. — Ed.