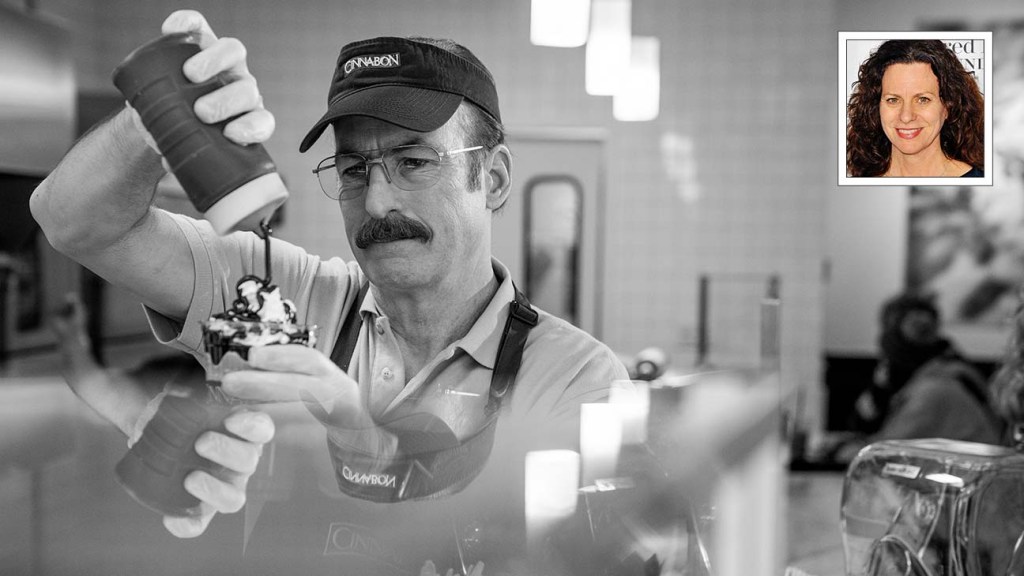 When Better Call Saul’s final season kicked off in April, fans were immediately taken by surprise when the season six premiere did not start with the life and times of Cinnabon manager Gene Takovic. Prior to season six, every season of Saul began with Jimmy McGill/Saul Goodman living on the lam as Gene in Omaha, Nebraska, but courtesy of writer Alison Tatlock and director Michelle MacLaren’s episode “Nippy,” viewers have now experienced their first full episode in the post-Breaking Bad timeline. Monday night’s black-and-white episode also confirmed the fact that Gene’s adventures have been taking place roughly five weeks after Walter White (Bryan Cranston) massacred the last of his enemies in Breaking Bad’s series finale.

According to Tatlock, delaying the Gene story until the second half of season six felt like a perfect left turn after last week’s game-changing episode, “Fun and Games.”

“After the emotionally intense ending of 609 and the leap forward into full-Saul territory, we felt that it would be exciting and surprising and hopefully delighting, ultimately, to shift gears and pop into our black-and-white future,” Tatlock shares.

Season four and season five’s Gene teasers also introduced Jeff (now played by Pat Healy), the threatening cab driver who recognized Saul Goodman from his days in Albuquerque. So, in order to level the playing field, Gene calculated a plan to get close to Jeff’s mother, Marion, who’s portrayed by the beloved Carol Burnett.

“We knew that she was a fan of [Better Call Saul] and Breaking Bad, so we just crossed our fingers. There were a lot of people working behind the scenes who did more than just cross their fingers, but I, personally, crossed my fingers,” Tatlock says with a laugh.

In a recent spoiler conversation with THR, Tatlock — who joined the series in season four and is now an executive producer — also discusses the episode’s climactic moment where Gene confesses how he really feels about his post-Breaking Bad life.

So you bucked convention in season six by not beginning with Gene. Instead, you saved him for tonight’s “Nippy,” the fourth-to-last episode. What made this the right time to deploy Mr. Takovic?

After the emotionally intense ending of 609 and the leap forward into full-Saul territory, we felt that it would be exciting and surprising and hopefully delighting, ultimately, to shift gears and pop into our black-and-white future. We didn’t know for sure that it would be a 610 event, but once we got there, it felt like the right moment.

The episode title, “Nippy,” also broke the season-long title pattern, but it makes sense since this is such a distinctive episode from the rest. Was that the rationale?

Exactly right. We almost felt like we were starting something new. The score is different, the cast is somewhat different, and we’ve never had a fully black-and-white episode before. So there were so many new elements in this episode that it felt right to mix it up now that this is the second half of the final season.

You cast Carol Burnett as Jeffie’s mom, Marion, and Carol was actually mentioned in Ann Cherkis’ 205. Chuck (Michael McKean) and Rebecca (Ann Cusack) were discussing a signal to give each other if Jimmy got too unruly at dinner, and they opted for Carol’s earlobe tug. Anyway, how did this casting come to be?

Well, we’re big fans of hers, and we were excited about the possibility of her playing a role. We didn’t plan the role specifically for her, but once the role was born, we realized pretty quickly that she would be incredible in it. And she was perfect for it. We couldn’t ask for anything more than to have her, and we were very lucky that it all worked out. We knew that she was a fan of [Better Call Saul] and Breaking Bad, so we just crossed our fingers. There were a lot of people working behind the scenes who did more than just cross their fingers, but I, personally, crossed my fingers. (Laughs.)

So it was just amazing to work with Carol Burnett. She had wonderful chemistry with Bob, and she brought such a great energy every time she showed up. She was super game. And because Bob was the remaining star of the show without our usual [series regulars], it was a little bit scary showing up in Albuquerque with kind of a new team, but what an ace team it was with Carol, Jim O’Heir as Frank and Pat Healy as Jeffie. It was quite a strong lineup, and it was truly exciting and gratifying to see them work.

I know they went out of business in 1985, but did the writers’ room ever consider resurrecting Hinky Dinky for Marion’s grocery store? [Writer’s note: Kim referenced that grocery store chain in Gordon Smith’s 207 as she was describing her best case scenario had she not left her tiny town on the “Kansas-Nebraska border” for bigger and better things.]

(Laughs.) We talked about Hinky Dinky quite a bit in the writers’ room, actually, but I don’t know if we talked about it specifically for that grocery store. That grocery store, Hansen’s, was ultimately named in honor of our brilliant property master, Mark Hansen. So there are different nods in the episode to people who have been working really hard behind the scenes. You might have also noticed Schnauz Farms Cheese [in honor of writer-EP Tom Schnauz].

I was going to ask you about this! Since Marion recoiled from the taste of Schnauz Farms’ Extra Sharp Wisconsin Cheddar, have you prepared yourself for an onslaught of angry letters from Wisconsin cheeseheads?

(Laughs.) Yes, there might be a range of folks who could be irritated for one reason or another, but it’s all done with respect to the [cheeseheads] of Wisconsin.

The schedule changed, understandably, and as a result, Don Harvey was no longer available to play Jeff. So you recast the role with Pat Healy. Did you have to rewrite the character at all to account for what Pat brought to the part?

We did not rewrite for Pat at all. When I was writing, we didn’t know that the casting would change, so we didn’t know enough about the differences between the two actors or who we would necessarily have. So it was written with the original Jeffie in mind, and what Pat then brought to it, we found really compelling. He took exactly what was written and made it his own.

Returning director Michelle MacLaren is royalty in the Breaking Bad universe. Was there an early moment on set where you realized why she has such an illustrious reputation?

First of all, I was very excited to work with Michelle. Peter [Gould], Vince [Gilligan] and others told me ahead of time that Michelle would direct the hell out of this, so I knew she was a great match for the episode’s complex filmmaking with all those monitors and movies within movies and montages and so many shots and so much math. When we started filming the pieces of the montage in the mall, she had Bob, as Gene, walk down the hall over and over again and dial it in as his confidence builds and builds. It was a subtle build, and it made for an incredible collaboration between director and actor. Bob, in a very nuanced and quiet way, turned up the volume of his own confidence, and that’s when I said to myself, “I get it. I’m in good hands.”

So the episode climaxes in a sequence where Gene uses the truth to distract Frank (Jim O’Heir), and in doing so, we learn how Jimmy really feels about his current lot in life. He’s lonely and filled with regret. What can you tell me about writing that moment and then capturing it on set?

It was very fun to write, and I loved writing all of the Frank-Gene scenes, including the emotional climax of all that. The duality of what Gene/Saul/Jimmy is doing in that moment is just psychologically interesting. One of Jimmy’s tricks or skills — even if he doesn’t consciously think of it that way — is to use his own emotional reveals as a manipulative device, while also experiencing the true emotion of the moment. There are moments on set where the stakes feel pretty high and you wonder how the actor will channel what’s on the page, but this was definitely one where we all felt in sync. You could see Bob realizing exactly what it was we had talked about.

In 201, the mall janitor was listening to the Rich Eisen Show from Oct. 21, 2010, and in 610, Jim O’Heir’s character referenced a college football game from the night before, which was Oct. 16, 2010’s Texas vs. Nebraska matchup. This detail reaffirms that we’ve been following Gene roughly five weeks after Walter White’s M60 massacre on Sept. 7, 2010. Will we eventually learn why you’ve kept Gene within arm’s reach of Breaking Bad’s conclusion?

I guess we’ll have to wait and see …

The Albuquerque Cinnabon that you used for the Omaha-set location is no longer operating. So was it quite a process to get that location up and running again to some extent?

We had incredible help from wonderful, talented Cinnabon people who not only got it up and running, but also showed the actors how to do their thing.

Marion referenced the “bad crowd” that Jeffie ran with in Albuquerque. Do you know who that bad crowd is?

We don’t, but we hope it’s evocative because we, of course, know so much about the Albuquerque world. But we don’t know specifically.

In a word, how would you describe the rest of the season?

***
Better Call Saul is now streaming on AMC. This interview has been edited for length and clarity.