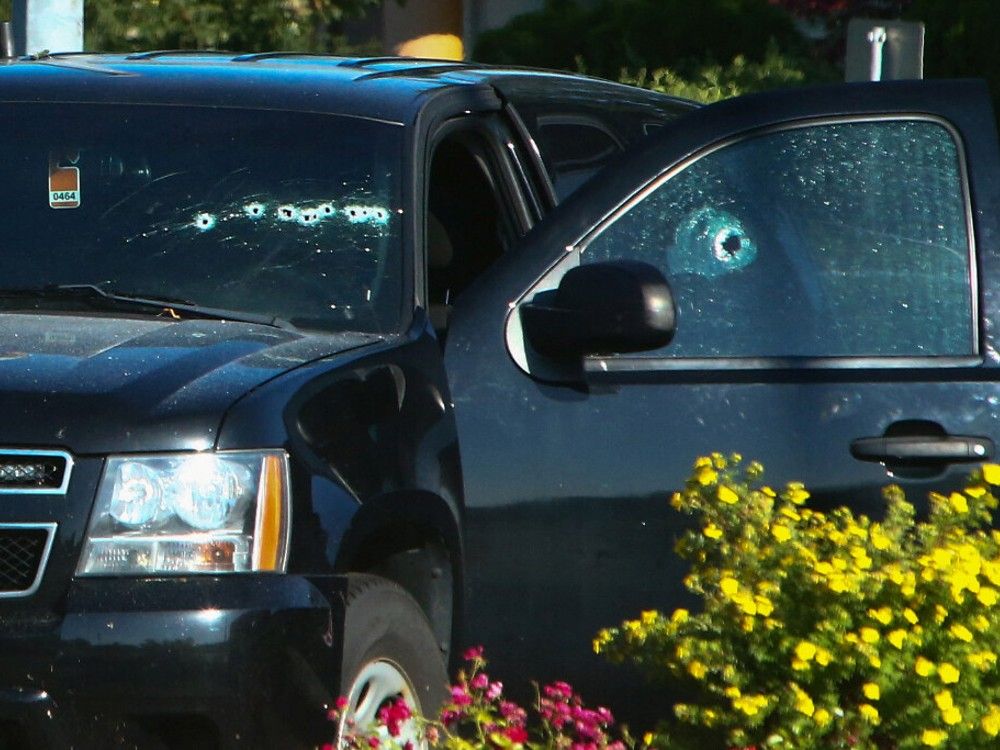 Three people are dead, including the suspect, after a shooting in Langley, B.C. involving transient victims on Monday.

The deadly shootings started about six hours before RCMP issued a cellphone alert warning the public.

RCMP Sgt. David Lee says the alert, which was issued around 6:20 a.m., was done “at the appropriate time”.

Two men were found dead, a woman was critically hurt and another man was shot in the leg at separate scenes around the Metro Vancouver town, with the first shooting taking place around midnight.

RCMP say the emergency response team found a man matching a description of the suspect not far from where another man was found injured with a gunshot wound to his leg.

During an interaction with the suspect, police say the suspect was shot and killed.

The two dead were found at Creekstone Place, a supportive housing facility for people transitioning out of homelessness, and at a Langley City bus loop.

The woman was found several blocks away.

“At this time we don’t know the motive behind this deadly incident, nor if there was any relationship between the deceased suspect and the victims,” B.C. RCMP Chief Supt. Ghalib Bhayani, the Vancouver Sun reported.

There are “several victims” and “several different scenes,” Langley RCMP said in a statement said.

There were also numerous reports of shots fired into closed or unoccupied businesses during the incident, the release says.

Police were urging residents to stay out of the area. Two blaring emergency alerts were sent out. The first, at 6:20 Monday morning warned residents and included a description of the suspect: a Caucasian man with dark hair, wearing brown Carhart coveralls and a blue and green camo shirt with a red logo on the right sleeve. The second alert, at 7:20 a.m. said that a suspect was “no longer a threat” and police later said a man they arrested was thought to be responsible for the shootings.

“We are asking the public to stay out of the following areas: 200 Street and Langley Bypass; Parking lot of Cascades Casino located at Fraser Highway and 204 Street, Langley Bus Loop located a Logan Avenue and Glover Road,” the statement continued.

The Integrated Homicide Investigation Team said they had been deployed to Langley.

Police were seen setting up forensics tents in the area.

A vehicle appeared to have been shot at and had a bullet hole through the window in a parking lot near 200 Street and the Langley Bypass, the Vancouver Sun reported. Police had cordoned off other nearby areas, including one scene where a backpack was toppled over and personal belongings, like a pair of shoes, were in the middle of the street.

A video on Twitter showed a heavy police presence near 200th Street outside Willowbrook Mall.

The Independent Investigations Office, which investigates any incidents of serious harm or death that may have been caused by police, has been notified.

This comes only a day after two people were killed in Whistler, B.C, a popular vacation spot for locals and tourists. The shooting took place near the Sundial Hotel, the RCMP said in a statement.

A burned car was also discovered by police, however, it was not clear if it was related to the shooting. Police later revealed they believed the shooting was targeted, in relation to the Lower Mainland gang conflict.

Meninder Dhaliwal, 29, a Brothers Keeper gangster, and his friend Satindera Gill, were the victims of the fatal shooting, the Vancouver Sun reported on Sunday.

Malik, who had been previously acquitted in the 1985 Air India bombing, was in his car when he was fatally shot.

A suspect vehicle was identified by police.

At the end of June, twin brothers Mathew and Isaac Auchterlonie were killed in a shootout with police after an armed robbery at a bank in Saanich, B.C.

“The motive behind the armed robbery and subsequent exchange of gunfire with police has not yet been determined,” Vancouver Island Integrated Major Crime Unit said in a statement. “We believe there could be people out that may have more information about the brothers, their recent activities and travels and we need those people to come forward and speak to police.”

With additional reporting by The Canadian Press