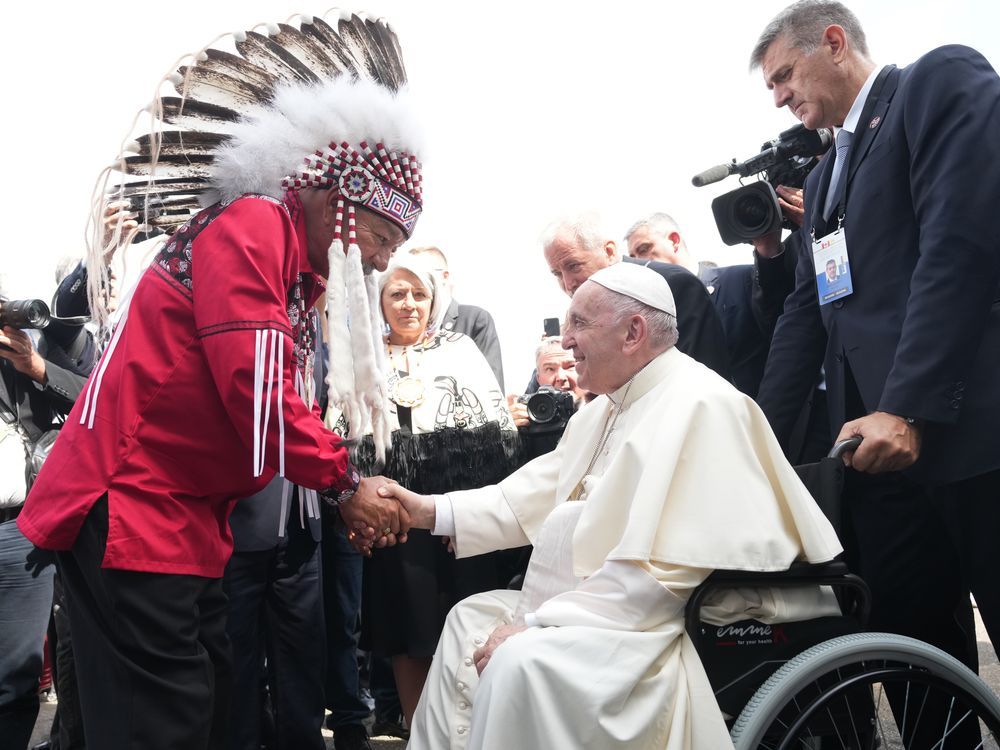 Today, many are expecting a historic apology on Canadian soil for the Catholic Church’s role in the Residential School system

On the first full day of his visit to Canada, Pope Francis delivered a historic apology on Canadian soil to Indigenous Peoples for the role the Roman Catholic Church played in the country’s residential school system.

The Pope spoke at the site of the former Ermineskin Residential School in Maskwacis, Alta.

“I am here because the first step of my penitential pilgrimage among you is that of again asking forgiveness, of telling you once more that I am deeply sorry. Sorry for the ways in which regrettably, many Christians supported the colonizing mentality of the powers that oppress the Indigenous people,” he said.

This is not the first time the Pope has spoken about residential schools. But his remarks in Canada have fulfilled one of the Truth and Reconciliation Commission’s calls to action, which called upon the Pope to apologize to survivors, their families, and communities on Canadian soil.

Back in 2018, the Pope said he would not apologize for the church’s role in operating the schools.

“The Holy Father is aware of the findings of the Truth and Reconciliation Commission, which he takes seriously. As far as call to action 58 is concerned, after carefully considering the request and extensive dialogue with the bishops of Canada, he felt that he could not personally respond,” said Bishop Lionel Gendron, president of the Canadian Conference of Catholic Bishops.

On Monday, in his remarks, Francis said the system of schools was “catastrophic.”

“Although Christian charity was not absent and there were many outstanding instances of devotion and care for children, the overall effects of the policies linked to the residential schools were catastrophic,” he said.

He was also urged by Prime Minister Justin Trudeau during a visit to Rome a year prior, to consider a similar gesture.

Three years later, after researchers said they had found 215 probable grave sites on the grounds of the former Kamloops Indian Residential School, the Pope addressed the discovery from Saint Peter’s Square.

“With sorrow I follow the news from Canada about the shocking discovery of the remains of two hundred and fifteen children, pupils at the Kamloops Indian Residential School in the Province of British Columbia,” he said in June 2021. “I join the Canadian bishops and the whole Catholic Church in Canada in expressing my closeness to the Canadian people, who have been traumatized by this shocking news.”

In April 2022, in the presence of Indigenous delegates from Canada in Rome, the Pope apologized for some of the church’s responsibility in running Residential Schools.

“I also feel shame — sorrow and shame — for the role that a number of Catholics, particularly those with educational responsibilities, have had in all these things that wounded you, in the abuses you suffered and in the lack of respect shown for your identity, your culture and even your spiritual values.”

The Pope’s visit to Canada had been in the works over the past four months and planned by the Canadian Conference of Catholic Bishops in collaboration with Indigenous communities and Residential School Survivors.