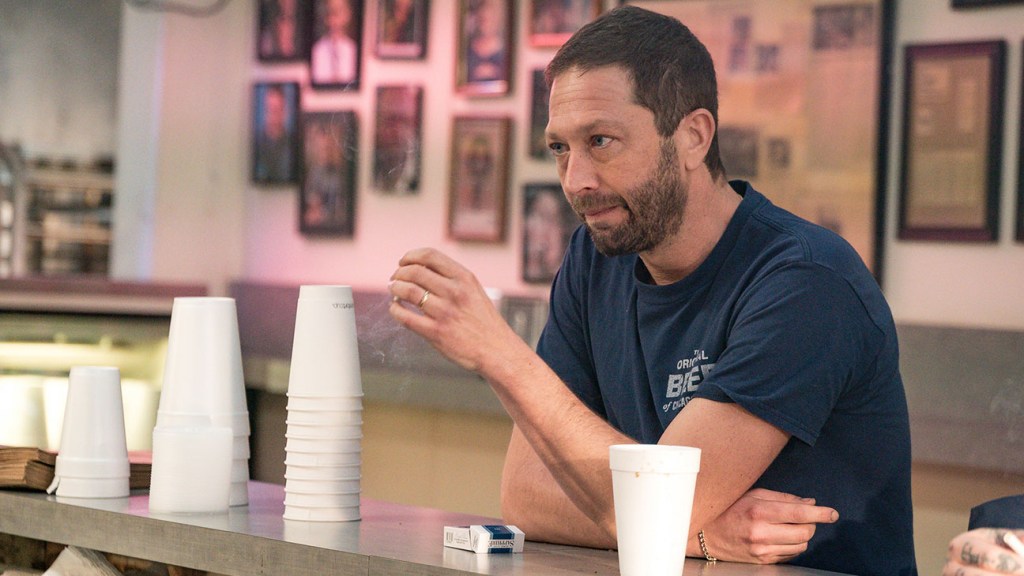 If 2022 can lay claim to “a show of the summer,” it would likely be FX on Hulu’s The Bear. Created by Ramy executive producer Christopher Storer, the buzzy food-world dramedy is set inside The Original Beef of Chicagoland, a debt-ridden sandwich shop left to James Beard Award-winning chef Carmy Berzatto (Shameless‘ Jeremy Allen White) by his late brother Michael (Jon Bernthal).

Into this high-stress environment, with all the subtlety of a grease fire, lands Michael’s belligerent best friend Richie Jerimovich. It’s a breakout role for Ebon Moss-Bachrach, 45, who also played the sensitive troubadour Desi on Girls (you may recall a certain explicit sex act he performed on Allison Williams) and who next appears in Girls creator Lena Dunham’s indie film Sharp Stick (out July 29).

But right now it’s The Bear that has people talking — and hungering for more. Moss-Bachrach caught up with The Hollywood Reporter from a family vacation in Europe to discuss the perfect sandwich, getting those kitchen details just right and the chemistry he shares with his co-star.

Hi there, Ebon. I understand you’re vacationing in Europe. Have any good meals out there?

I just had some really nice shrimp actually. We’ve been in France now and the ham and cheese, the “jambon beurre” sandwiches that they have here, I was thinking about them in counterpoint to these beef sandwiches. And man, they’re so good. They’re so simple and delicious.

I guess you’re away from the U.S. right now, but everyone’s talking about the show and certainly talking about you on the show. Are you getting a sense of that at all?

I am away, but I also am an actor with an ego, and I’m sensitive and needy. So I do check in and I’m getting a sense of this reception for The Bear — which is pretty astonishing and just simply really awesome. I do absolutely love that show and loved every part of making it. I loved everyone involved in such a pure, simple way. It’s such a collaborative medium that usually there’s some issue. And I’m kind of a complainer and a baby, anyway. So I always find something to complain about — but this was just weirdly absent of any of that stuff and just felt easy from the beginning to the end.

It’s funny to hear you say how it was so smooth behind-the-scenes, because of course, in the scenes, it’s nothing but conflict and hair-raising, butt-stabbing kind of stuff. It makes me very tense to watch it, but you’re saying the production of it actually went very smoothly.

We came in ahead of schedule. I think we were under budget. Most of this stuff is really a testament to Chris Storer and Joanna Calo who wrote and ran the whole thing. All the scripts were fully delivered at the beginning. Everybody was in the room all the time. And FX was really trusting and wonderful with us and just gave us a lot of freedom. And so we were just able to be together and make this thing in the coldest two months of the winter in Chicago, when you don’t really want to be doing anything anyways. So to be with these great people in this little stage, this simulated restaurant, was just a very cozy and warm experience.

The Bear has drawn praise for its authenticity in depicting the restaurant industry. Were you warned things would get very real on this show?

There were a lot of people on board that had really firsthand knowledge of this, mainly being [consulting producers] Courtney [“Coco” Storer, chef and sister of Christopher Storer] and Matty [Matheson, a pro chef who also plays handyman Neil on the series]. The details were really important to them. That came as a surprise to me because I’ve never really been in the food industry. But they really wanted to honor the difficulties inherent in that job and just the complicated and tough and really unique nature of being in these kitchens.

I hear some chefs are actually being triggered by the show. Have you heard anything like that? Back-of-house PTSD?

And in terms of your character, Richie is a pretty high-strung dude. Did you have a hard time finding it and getting to the right levels with him?

It just strangely felt pretty easy. I don’t know. I connected with this guy for whatever reason. I just had a lot of sympathy for Richie from the beginning. I suffer a lot for my art, for my craft, and it never felt good unless I was really having a bad day. And as I’ve gotten older, I think that maybe that’s helpful for some parts, but also just to be relaxed and free. That’s what I latched onto with this. I think that there’s a real performative element to Richie when he’s in the world of The Beef and that’s his stage and that’s the one place he feels OK. And he can take attention off of himself.

The last episode is really a tour de force. It gets so emotional between you and Jeremy Allen White’s character Carmy. What is your relationship like with Jeremy, where you could access these deep wells of pain that you were both sharing over the loss of Carmy’s brother Mikey?

I think it’s just having a great scene partner. I look in Jeremy’s eyes and he’s in pain. And seeing him in pain, seeing it all there in his eyes, makes the reality of that moment so much more potent for me and just locks me in. If you’re lucky enough to be working with good people like this, you just trust them and it takes care [of itself]. Also, this was at the end, and I’d spent two months with Jeremy. And when you’re acting with somebody, you have to really, really trust them and you have to be open and vulnerable with them. So it’s like a very quick intimacy that happens between people. He’s so good. And his eyes are so expressive and also being in that jail — we were in this horrible jail in Cicero, Illinois. I don’t know. It just gets in you. It’s not a place you want to spend any time at.