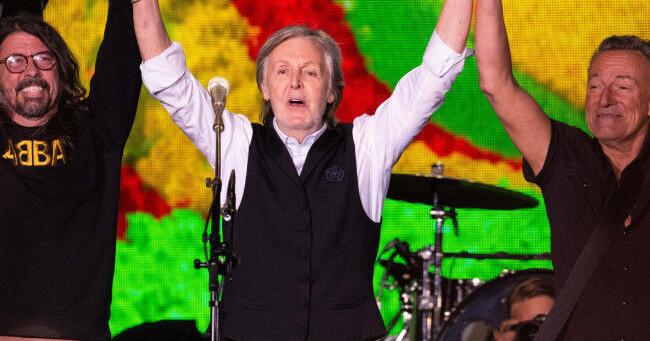 Sir Paul McCartney got “back together” with the late John Lennon during his Glastonbury set on Saturday (25.06.22).

The 80-year-old musician – who is the event’s oldest ever solo headliner – stunned the crowd at the Pyramid Stage when he sang a virtual duet with his late bandmate on ‘I’ve Got A Feeling’ thanks to the help of director Sir Peter Jackson, who helmed the recent Beatles documentary ‘Get Back’.

He said: “I’ve got a special little thing here. One day, Peter Jackson rings me up and says he can take John’s vocals and isolate them so that you can play live with John on tour. He said do you fancy that?”

After the pair traded verses during the song, Paul said: “That’s so special for me man. I know it’s virtual but come on – it’s John. We’re back together.”

And that wasn’t the only surprise Paul had for the crowd as earlier in his set, he introduced Foo Fighters frontman Dave Grohl – who had flown in from the US for his first performance since the death of bandmate Taylor Hawkins in March – and the rocker joined him on ‘I Saw Her Standing There’ and ‘Band On The Run’.

Introducing Dave to the stage, Paul said: “Now, I’ve got a little surprise for you… Your hero from the west coast of America – Dave Grohl!”

He later noted: “This guy flew in especially to do this.”

After the two songs, the Beatles legend then told the crowd: “We’ve got another surprise for you.”

He then announced he was about to be joined by another guest “from the East Coast Of America”, with Bruce Springsteen walking out to cheers.

He joined Paul on a version of his own 1984 track ‘Glory Days’, and early Beatles single ‘I Wanna Be Your Man’.

The two stars then returned to the stage to help Paul close out his 38-song career-spanning set with a rendition of ‘The End’.