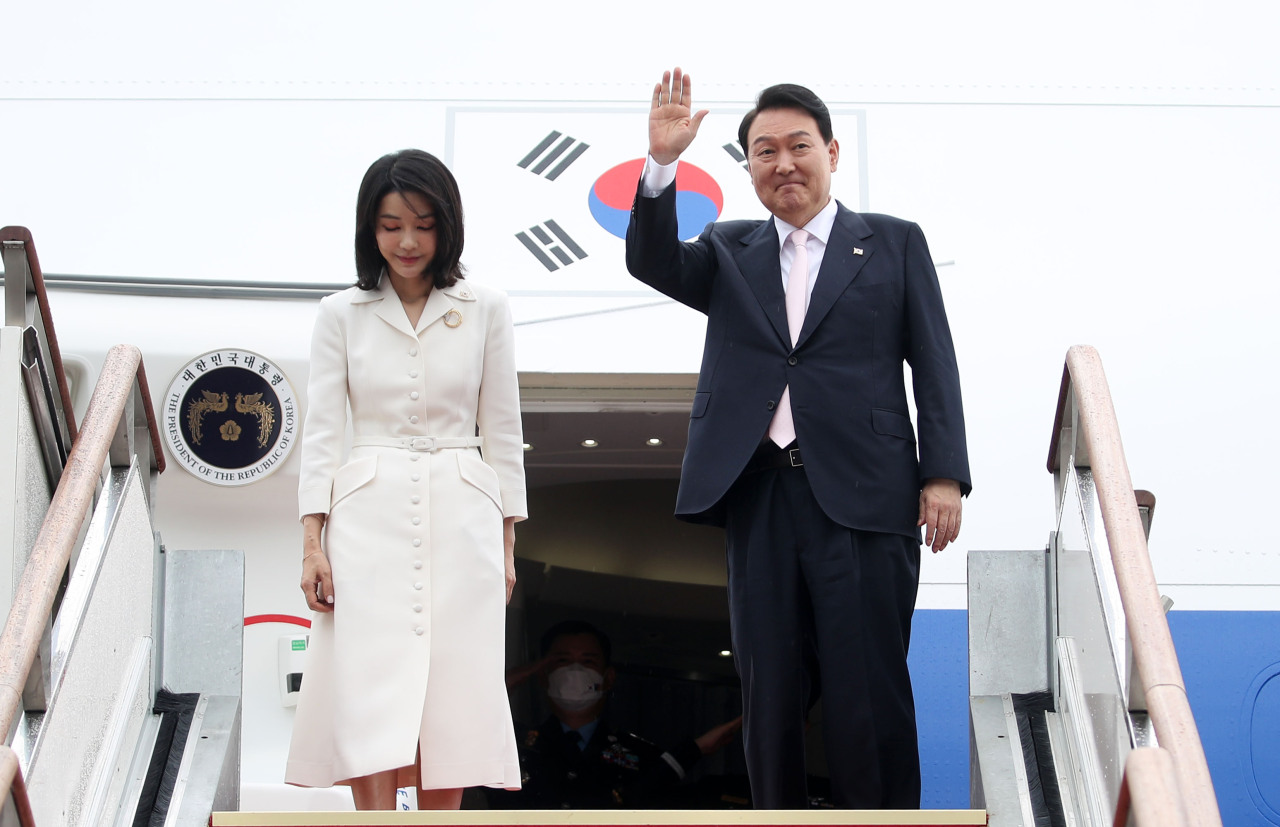 President Yoon Suk-yeol left for Madrid, Spain, on Monday to attend the NATO summit and will be the first Korean president to participate in the Western military alliance gathering. He seeks to strengthen security ties with Western countries and to rally the international community’s support for North Korea’s denuclearization.

South Korea was for the first time invited to the NATO summit that takes place from Tuesday to Thursday as an Asia-Pacific partner along with Japan, Australia and New Zealand.

As Yoon’s first overseas visit as president, the event marks his debut on the multilateral diplomatic stage.

During the trip, Yoon will hold a total of 14 diplomatic meetings, including nine bilateral meetings with NATO allies and partners, talks with NATO Secretary-General Jens Stoltenberg and Spain’s King Felipe VI, and a luncheon meeting with Spanish business leaders.

Three-way talks between South Korea, the US and Japan is set for Wednesday where they will discuss security cooperation related to North Korea. The trilateral discussion is the first such gathering since the UN General Assembly in September 2017, the beginning of the previous Moon Jae-in administration.

President Yoon and Japanese Prime Minster Fumio Kishida will not hold a bilateral meeting, Seoul’s presidential office confirmed Sunday. The heads of the four Asia-Pacific nations are also unlikely to have a separate summit.

However, Yoon’s and Kishida’s schedules will overlap at least three times, including a dinner hosted by Felipe, a meeting of the North Atlantic Council and the Korea-US-Japan summit.

As for bilateral meetings, he will hold talks with Finland on Tuesday, the Netherlands, Poland, Denmark on Wednesday and the Czech Republic on Thursday. He will also meet briefly with European Commission President Ursula von der Leyen and the leaders of Canada and Romania, respectively.

Accompanied by first lady
First lady Kim Keon-hee will also accompany Yoon on the trip to attend separate sessions for leaders’ spouses at the NATO summit. It will be the first time Kim appears as first lady on the international diplomatic stage.

Starting with a dinner hosted by the king of Spain at the Royal Palace of Madrid on Tuesday, Kim will then go on a palace tour and visit the royal glass factory and Reina Sofia Museum on Wednesday.

She will also attend a Spanish-Korean dinner meeting with Yoon on Wednesday evening. On Thursday, the last day, she will visit the royal opera house to watch a rehearsal.