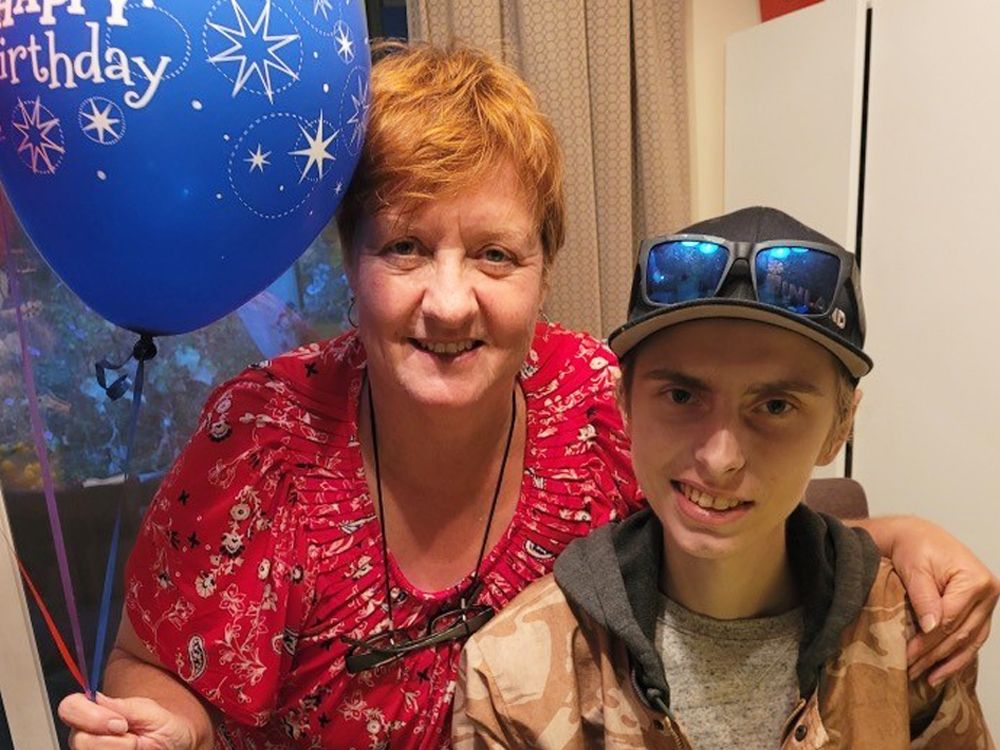 Donna Suski will always remember her grandson, Eric Coulam, as a kind and caring young boy.

He lived with her at her townhouse complex in Vernon, B.C., for several years during his childhood. She said the neighbours adored him. When he was old enough, he would go around asking if he could shovel their driveways or mow their lawns.

In 2013, shortly after Coulam lost his mother to suicide, his health began to decline. It started with a stomach ache, said Suski, but it progressed to something much worse.

Coulam has been living with an undiagnosed gastrointestinal condition which has led to multiple hospital stays, liver and kidney disease, and severe chronic pain. He has visited countless doctors and endured many months in hospitals but has yet to get a diagnosis.

After struggling for almost a decade, Coulam, who now lives in Fort St. John, B.C., has decided to get medical assistance in dying, known also as MAID. He is 20 years old.

Suski said she struggled to accept her grandson’s decision.

She knows, however, how horrible Coulam has felt, especially over the past couple of years, and how hard he has fought for a diagnosis.

Suski remembers Eric visiting her over Christmas after he had moved to Fort St. John and at the beginning of his health struggles. He was complaining about a terrible stomach ache. She tried to get him into multiple walk-in clinics, but they were all closed for the holidays. She said they thought it may be gluten intolerance.

“But I told him, when you go home, make sure you see a doctor.”

In an interview with a local Fort St. John news site, Coulam discussed his health journey. He said he visited a doctor who performed a scope to investigate his intestine. The doctor encountered a blockage, but Coulam said they did not tell him to take any medications or phone a gastrointestinal doctor.

A couple of days later, he went back for another scope and doctors encountered the same issue.

Eventually, after continuing to eat, his stomach ruptured as the food could not pass through his intestines. The rupture caused fluid in his intestines to enter his bloodstream, leading him to enter septic shock and go into a coma for around two weeks.

His grandma said she thinks the stress of losing his mother and having to grieve at such a young age caused his health to decline so rapidly.

Over the years, Coulam has been admitted to hospitals in British Columbia and Alberta, battling various illnesses such as pancreatitis, and liver and kidney disease. He has had his small bowel removed and suffers from constant chronic pain, yet he has never received a proper diagnosis.

In July 2021, Coulam moved in with his grandma in Vernon again. Suski renovated her house to accommodate his health, making it comfortable and easy to navigate. Coulam had just gotten out of a long hospital stay and was learning when and how to administer his medications.

Suski said they would get boxes of supplies sent every week, syringes, IV bags, and other medical paraphernalia. Coulam had to teach his grandma how to use them all in case he was too weak to do it himself.

“We had such a bond,” she said. “We really enjoyed each other’s company.”

Coulam had to leave Vernon suddenly one morning in October 2021. He had ended up in the hospital due to his illness and had to be air lifted to Fort St. John for treatment. Suski said she had seen him the afternoon before, but did not get to say goodbye when he left. She has not seen him since.

“It is very hard for the two of us to keep saying goodbye to each other.”

Coulam first began considering medical assistance in dying while spending time in a hospital in Kelowna.

This process includes a patient taking a drug, prescribed and provided by a doctor or nurse practitioner, that will cause their death. It is currently only available to select people who meet certain eligibility criteria, including being over the age of 18. A person must also make a voluntary request and give informed consent for the procedure. They must have a “serious and incurable illness, disease or disability,” which is irreversible and be living in intolerable physical or psychological pain that cannot be alleviated.

In Canada, the law does not require a person’s natural death to be reasonably foreseeable for them to receive MAID.

According to the 2020 Report on Medical Assistance in Dying in Canada, the average age that people received MAID was around 75 years old. Only 5.5 per cent of people that were provided MAID were in the 18- to 55-year-old age range.

Coulam said that while in hospital, one of the other patients in his room was provided MAID. He asked his doctor what that entailed, and after doing research and speaking to specialists, he decided it was the best option for him.

When Coulam lived with his grandmother in Vernon as a child, he quickly made friends with the kids living next door — Brittney Yawney and her younger brother Landen. They got along quite well, said Suski.

While Coulam was closer in age to her brother, Yawney said she would end up tagging along on their adventures, looking out for them as big sisters usually do.

“He’s like a little brother to me,” she said.

When she first heard of Coulam’s choice, Yawney said she was overwhelmed by sadness.

“He’s been so robbed of his life,” she said. “He just kept going to all of these doctors and wanting answers, but they had nothing for him.”

During one of his hospital stays in Vernon, Yawney paid a visit to her friend. He mentioned to her that he was thinking of starting a Facebook group for friends and family to connect and where he could share updates on his health.

They came up with the name “Eric’s Army.”

What they thought would be a small group, has since grown to over 1,000 people from across the country.

Yawney runs and moderates the Facebook page, overseeing the conversations to make sure no one criticizes her friend’s decision to get approved for MAID.

“Unless you’ve walked a day in Eric’s shoes, nobody gets a say except for Eric,” she said.

Yawney is supportive of Coulam’s decision and is a fierce ally for her friend.

“Eric knows best, it’s his life and his body and we all need to respect the decision he’s made because NONE of us know how much he has gone through,” she wrote in a post on the Facebook group.

When visiting Coulam in hospital Yawney said she asked him: if he doesn’t choose MAID, will he eventually die on his own?

“Hell no,” he told her. “I am way too much of a fighter to ever go on my own. I’m choosing this because I want to go out when I choose, not because some disease is taking me out.”

Yawney was struck by her friends statement, she said. He wants to have control over his suffering, and his death, rather than succumb to his illness.

Coulam has not yet set a date for his procedure, but before he passes, he wanted to hold a celebration of life with his close friends and family and take the opportunity to say goodbye, on his terms.

He just kept going to all of these doctors and wanting answers, but they had nothing for him

The event, held in late May at his father’s house in Fort St. John, was a great success, said Yawney. All of the food and drinks were donated by local businesses and there was a band for entertainment.

“I heard that he didn’t even get home ’till like midnight, which is super late for him,” she said.

After the event, the Eric’s Army group was flooded with heartfelt messages and pictures with Coulam.

“Not many people get the chance to go out on their terms and he has my full support and always will,” wrote another.

Coulam is currently in a hospital in Fort St. John. He was not able to comment on this story before publication due to his health. Yawney and Suski said they have not been able to contact him for weeks.

“I think he’s holding back a little bit,” said his grandma. “I think he’s trying to prepare us for what’s going to happen.”