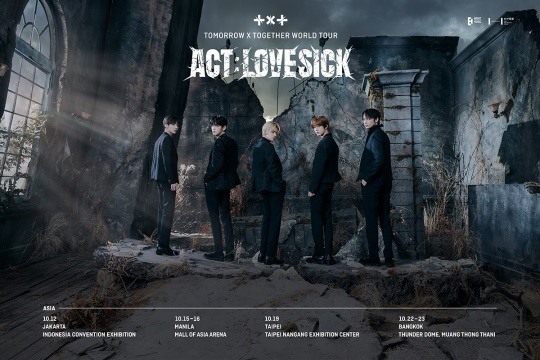 Tomorrow X Together announced plans to visit four cities in Asia in October on Tuesday.

The band uploaded a poster that showed destinations for the Asian leg of its international tour, adding Jakarta, Manila, Taipei and Bangkok to its itinerary.

The quintet will kick off its first world tour, dubbed “Act: Lovesick,” with two concerts in Seoul on July 2-3. The following week, it will fly over to the US, performing eight times in seven cities from Chicago and New York to San Francisco and Los Angeles. In September, it will take to stages in Osaka and Chiba, Japan, followed by six performances in four cities.

Meanwhile, the band’s fourth EP “minisode 2: Thursday’s Child” extended its stay on the Billboard 200 to four weeks. It ranked No. 59 on the chart for this week after hitting it at No. 4 upon release.

The video was uploaded in September last year. “Money” is from her first solo EP “Lalisa” and surpassed 400 million streams on Spotify in record time for a K-pop solo musician. The single ranked No. 5 on Spotify’s global chart and topped the iTunes top songs chart in 38 regions.

The idol has 79 million followers on her personal Instagram account as of Monday, the third-most for an Asian celebrity and the most for a K-pop artist.

In the meantime, the quartet is expected to make a comeback in August, in time for its debut anniversary.

“Proof” was fully unveiled on June 10 and headed straight to the top of Billboard 200, becoming the band’s sixth album to claim the spot. It also topped Oricon’s daily album ranking and weekly digital album ranking and hit UK’s Official Album Chart Top 100 at No. 8.

The 3-CD album sold over 2.75 million copies in the first week of sales, the second highest record in K-pop history.

Girl group aespa will put out its first English-language single “Life’s Too Short” on June 24.

The band performed the upbeat song for the first time at Coachella in April. It will be dropped in advance to the release of second EP “Girls” that is due out on July 8.

On Monday, “Next Level,” a video that further expands its narrative was unveiled. In the clip, the bandmates faced “sync out” from their avatars and suffered hallucinations cast by their nemesis, Black Mamba.

Separately, the quartet will host a two-day showcase in Los Angeles on June 26-27.