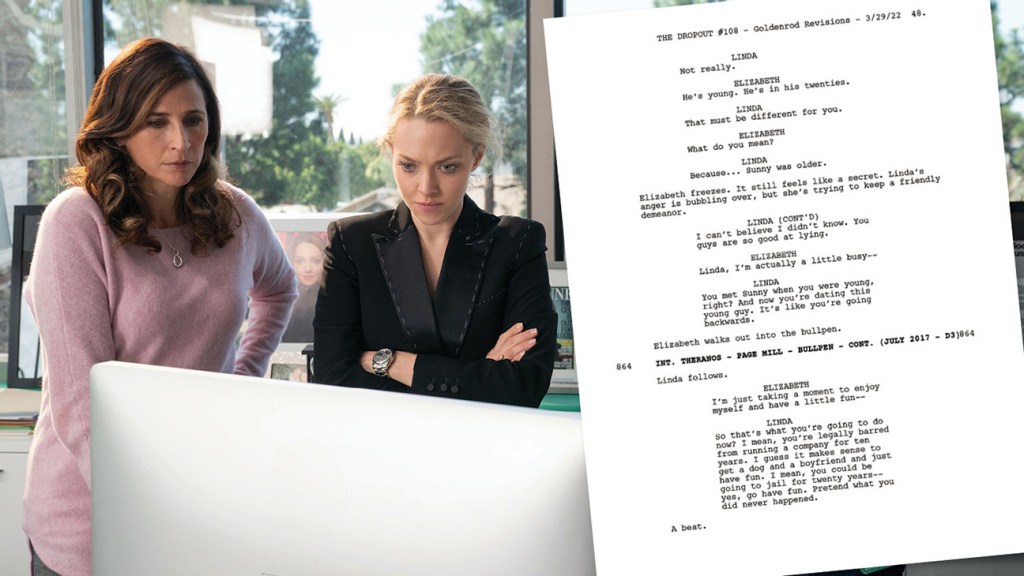 Theranos founder Elizabeth Holmes was still on trial for wire fraud when The Dropout showrunner Elizabeth Meriwether was finishing the final scripts for the Hulu limited series. “I had the idea of ending the series with Elizabeth at Burning Man with her new boyfriend,” Meriwether tells THR, but she notes that pulling off a shoot like that would have been too costly. “I was told I could either have music in the last few episodes or I could go to Burning Man. I realized I had to come up with another idea.” The replacement for a costumed romp in the desert was this penultimate scene in the series, when Holmes (Amanda Seyfried) is finally confronted by someone close to her about her deceptions that led to the downfall of Theranos.

Elizabeth, having broken up with her much older boyfriend, Sunny Balwani (Naveen Andrews), who was also Theranos’ president and COO, is now full of life as she imagines a future with the new love of her life. “I felt like a detective,” says Meriwether of tracking Holmes’ relationship over social media. “I was trying to figure out what this new life was with Billy and sort of where she was.” She admits that the new life Holmes was broadcasting on Instagram gave her insight into where Elizabeth Holmes, as a character, would be at the end of the series. “In a way, she’s getting to relive her 20s, but at the same time, I don’t think people change that much, that easily. I wanted to show the conflict of what she was telling the world and what was actually inside her.”

Michaela Watkins plays Linda, Theranos’ legal counsel. “Michaela is somebody that I love as a friend and have worked with before,” says Meriwether. “I feel like she became my proxy in this moment — talking to Elizabeth as if the audience could talk to her.”

While this line seemingly represents the Silicon Valley ethos, it’s also directly pulled from Holmes’ trial, which concluded in January, just months before The Dropout‘s premiere. “That really stuck with me,” says Meriwether. “I had been spending so much time trying to figure out how Elizabeth defended her decisions to herself. When I heard that, it was the first time I’d heard her say she failed. And it was also the closest thing that she could say to herself to understand the choices that she made. That was a moment that was added after the trial.”

This is also a line that came from real life. “Elizabeth went onstage and presented another Theranos machine, like her final attempt to keep the company alive,” says Meriwether. “As she was leaving the stage, somebody yelled, ‘You hurt people!’ ” While there’s no doubt Holmes heard the heckling, she still didn’t admit her complicity. “As a writer looking for some sort of catharsis or some sort of moment of acknowledgment from her, this was [as close as we got] before the trial.”

In the following scene — the series’ last — an exasperated Elizabeth lets out a massive, cathartic scream, which everyone on set felt she landed except for her furry co-star. Says Meriwether, “We ended up having to shoot half the takes without the dog because the dog was so scared.”

This story first appeared in a June stand-alone issue of The Hollywood Reporter magazine. To receive the magazine, click here to subscribe.