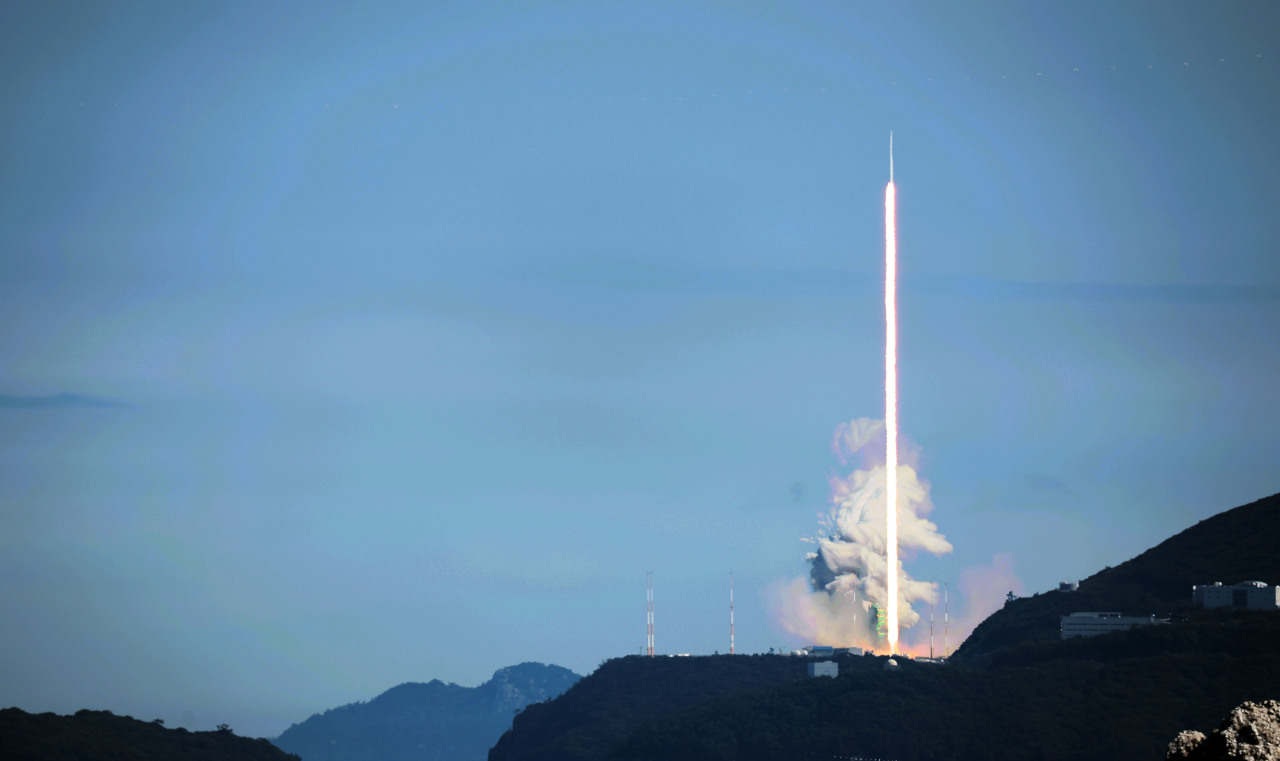 The three-stage rocket reached its target orbit of 700 kilometers, making South Korea the seventh country in the world with indigenous capabilities to develop and launch a satellite greater than 1 ton. Tuesday‘s success is expected to boost the nation’s space ambitions to land a lunar module on the moon by 2031.

According to the KARI, rocket Nuri blasted off at 4 p.m., as scheduled, after a 10-minute countdown. The first stage of the rocket separated from the rest of the rocket 2 minutes and 3 seconds after the launch.

After the second stage rocket fell off, the third stage rocket dislodged the 180-kilogram performance verification satellite, which is able to explore space and send data, when it approached the 700-kilometer orbit.

In 15 minutes and 40 seconds from the launch, the 1.3-ton dummy satellite, which was loaded to add enough weight to the space rocket, fell off from the performance verification satellite.

KARI’s Antarctic Sejong ground station received confirmation from the satellite at around 4:42 p.m., showing that the satellite was in a stable position. The station is located at King George Island, one of the largest South Shetland Islands, lying 120 kilometers off the coast of Antarctica.

“Today we have not only launched the Nuri rocket but separated and placed the performance verification satellite into the target orbit. This is meaningful because the year 2022 almost marks the 30th anniversary when South Korea first launched a space rocket,” said Lee Jong-ho, science and ICT minister, during a briefing.

The remaining goals would be to make sure the performance verification satellite communicates with the ground stations and releases cube satellites, according to First Vice Minister Oh Tae-Seog of the Ministry of Science and ICT.

At around 8-9 p.m., the satellite was to send beacon signals that help the station to verify whether it is still on track and facing the sun. At around 3 a.m. Wednesday, KARI‘s Daejeon ground station was to receive data including the exact timeline on the separation process of the rocket and its orbit data.

Unlike the October launch, which only loaded a dummy satellite, this time, Nuri carried the performance verification satellite that is capable of testing the rocket’s capabilities in gathering space data for the next two years.

The satellite is operated by the country’s three core inventions — the electrically heated thermoelectric generator, the control moment gyroscope and the S-band antenna.

The generator is basically a heat-generating battery that converts heat flux or temperature differences into electrical power. The control moment gyroscope is a device used to move the satellite in space, after the S-band antenna receives orders from ground stations on Earth.

Starting from June 29, seven days after the launch, four small cube satellites will be freed from the satellite, each weighing between 3.2-9.6 kilograms and measuring 30 centimeters in height. They were developed by four universities — Chosun University, Seoul National University, Yonsei University and the Korea Advanced Institute of Science and Technology.

The four satellites will be released on two-day intervals for research purposes. The satellites cannot be released all at once because this might destabilize the performance verification satellite, the KARI said.

Despite the cloudy conditions on the launch date, the speed of winds on the high altitude was observed at around 75-80 meters per second, which was not strong enough to affect the liftoff.

The government-led project of developing the three-stage, liquid-fueled carrier rocket, weighing 200 tons and standing 46.2 meters tall, took 12 years. The total budget injected in the project was 1.9 trillion won ($15.1 billion). More than 300 South Korean companies had participated in the supply of rocket components.

Starting from 2023 to 2027, South Korea plans to carry out the Nuri Acceleration Project, which will send four additional rockets to space to boost the reliability of the Nuri space rocket and promote private enterprises that develop satellite projectiles. The government has secured a budget of around 680 billion won, according to Goh Jung-hwan, director of KARI’s KSLV-II (Nuri) research and development directorate.

Last year’s launch failed to put the third-stage rocket into orbit because the engine shut down early. The government in December concluded that the loosening of a fixture holding the rocket’s helium tank led to the leakage of oxidizer, a chemical that makes fuel burn.

Learning from the failure, the team behind Nuri made reinforcements on a helium tank anchoring device inside the third-stage oxidizer tank, and applied a thicker manhole cover that closes the oxidizer tank.

Meaning “world” in Korean, Nuri is developed with exclusively homegrown technologies, unlike the 2018 rocket Naro, which carried Russian-made engines.

Before the second launch, Nuri had its fair share of ups and downs on the road. On June 15, one day before the launch, a sensor malfunction in the oxidizer tank during a final check-up at the launch pad canceled the Thursday launch and postponed it indefinitely.

Two days after, KARI said it fixed the technical glitch after changing the 1.2-meter-long core component of the sensor and announced the new launch date.

“Now, a path to space has been opened from the Republic of Korea,” Yoon told the Nuri project engineers. “It is the result of overcoming tough challenges over 30 years.“

”Now the people of the Republic of Korea, and the dreams and hopes of our young people, will reach out to space,” he said after watching the launch from his office in Seoul.