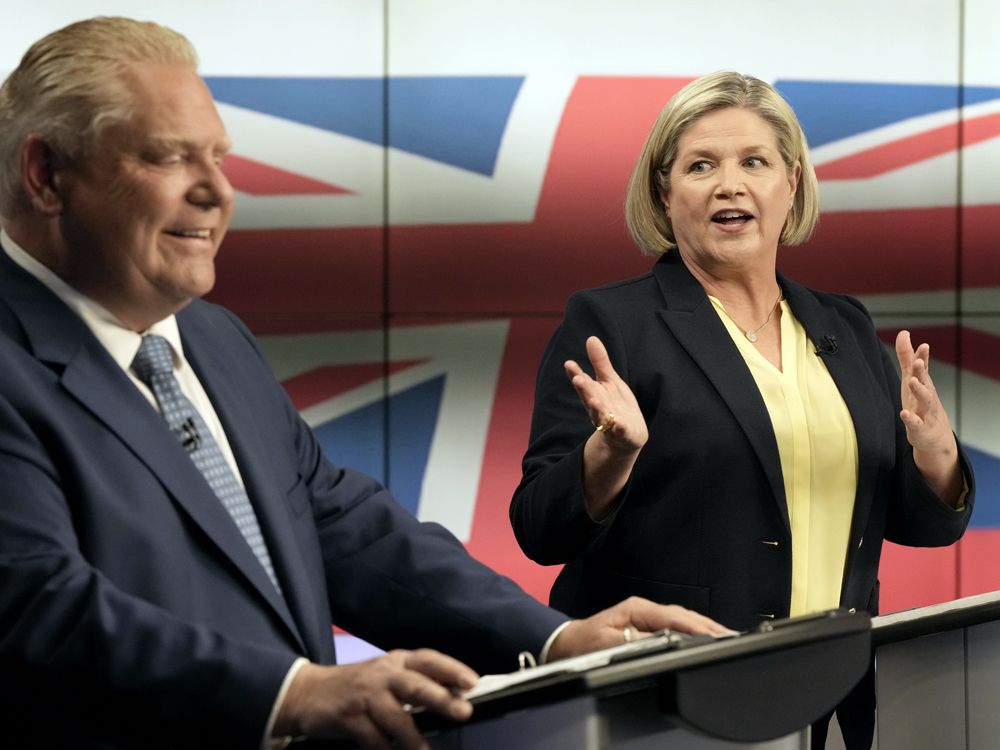 With a little over two weeks before election day in Ontario, Andrea Horwath’s NDP appears to be struggling to turn widespread support for its platform into committed New Democrat voters, according to the latest Postmedia/Leger poll.

The poll, released Wednesday, shows significant support among voters for NDP campaign promises and for Horwath herself. But the proportion of respondents planning to actually vote for the NDP nevertheless showed a two-per-cent drop from last week’s numbers, from 25 to 23 per cent. The lead enjoyed by Doug Ford’s Progressive Conservatives also slipped two points from last week to 37 per cent, while support for the Liberals grew two points to 28 per cent.

“I imagine that as the campaign winds down to election day, the attacks on the Ford government may ramp up a bit,” said Leger’s Andrew Enns. “I think both parties will say the best road might be to convince as many people as possible to vote against Doug Ford, and let’s take our chances.”

Support for the Green Party increased by one point to five per cent, while the New Blue and Ontario parties each hold three per cent of declared support.

The NDP also ranked well when respondents were asked to list the party their second choice for support, with 29 per cent of other parties’ voters ranking the NDP as their next-best option. The NDP ranked as second choice among 31 per cent of Green Party voters, 21 per cent of declared PC voters, and an overwhelming 61 per cent of Liberals.

“If at some point in time all those Liberal voters have second thoughts, it could certainly see a shift in support for Andrea Horwath,” Enns said.

And when respondents were asked to blindly rank campaign promises (they weren’t told which party made each promise), they were heavily in favour of key NDP promises. The two promises ranked most highly by respondents, free-to-low-cost dental care and provincial regulation of gas prices, were both from the NDP campaign, with 72 and 62 per cent describing them as good ideas for the province.

Horwath also ranked second place among party leaders when respondents were asked who would make the best premier. Ford was the top pick at 31 per cent, with Horwath at 20 per cent, while Liberal leader Steven Del Duca was picked by just 13 per cent of respondents.

A key variable continues to be the undecided vote, which Enns said remains robust across all parties.

Just under half of respondents said their vote was final, with 61 per cent of PC voters saying their minds were made up, compared to 50 per cent of NDP voters and 39 per cent of Liberal voters.

“The PC vote (certainty) seems to be solidifying as the campaign goes on,” Enns said. “They were below 50 per cent at the beginning and have crept over 60 per cent of PC supporters saying their vote is final.”

Forty-six per cent of all voters say they may change their minds come election day, while only four per cent say they didn’t know to vote for.

“They’ve obviously picked up a few points of support as the campaign’s gone on, I venture to say those people aren’t 100-per-cent committed at this stage,” he said. “There’s still the potential for some last-minute vote shifting.”