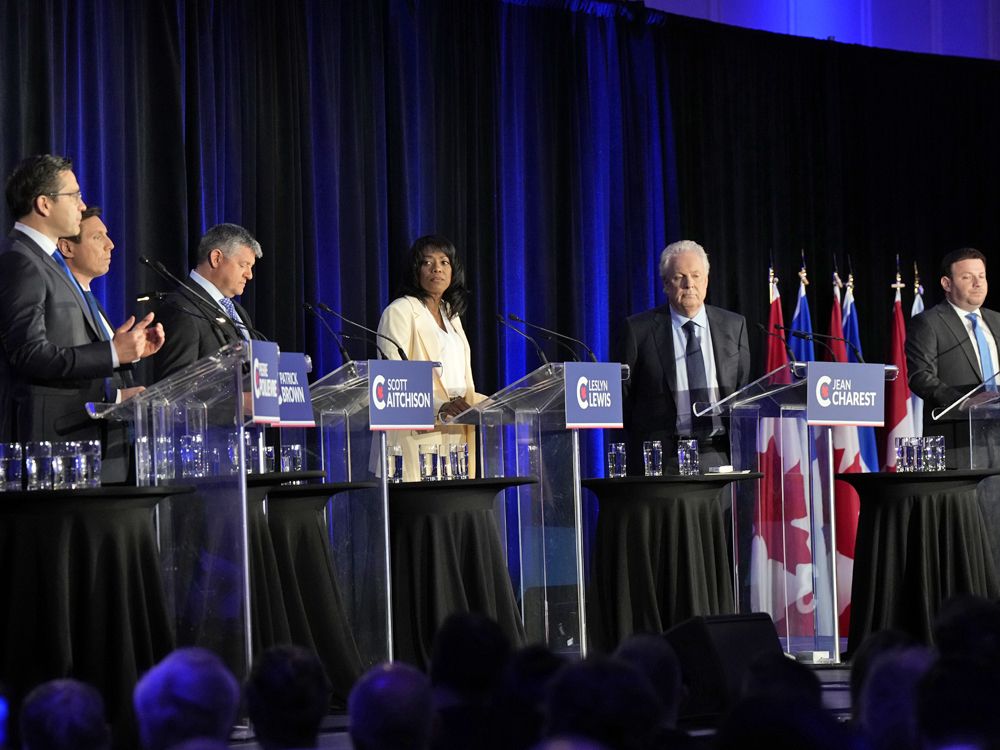 It was a verbal brawl between federal Conservative leadership candidates on stage but an even louder one among supporters in the crowd during the only French-language debate Wednesday night.

But the debate quickly became a three-way fight between Poilievre, Charest and Brown, with the latter two focusing their fire on the race’s perceived front-runner. Towards the end of the debate, Poilievre even referred to them as a “little coalition.”

Baber, Lewis and Aitchison rarely spoke during the frequent open debate segments, largely because they were unable to speak in French without reading their notes.

The candidates sparred in front of a crowd of approximately 600 people, who erupted into cheers and loudly chanted Charest’s name as the candidates took the stage. They only stopped when Charest, who was beaming, signalled them to tone it down.

Unlike the English debate two weeks ago, there were no pop quiz questions, no sad trombone and candidates were allowed to pronounce the prime minister’s name this time around. The Conservative Party of Canada took note of its critics and modified the formula to let candidates articulate their ideas more fully.

Once again, audience members were asked to avoid clapping and cheering, otherwise the moderator would take time off of their candidate’s speaking time.

But the crowd, who was favourable to both Charest and Poilievre, ignored the instruction and at times stole the show, chanting, clapping or even booing so loudly that moderator Marc-Olivier Fortin regularly paused the debate to ask them to quiet down.

Fortin grilled candidates on immigration, border security, health care and Quebec-specific issues — such as Quebec’s law on religious symbols (Bill 21) and its new controversial law to protect the French language in the province (Bill 96).

Most candidates took very critical positions on both laws.

From the get-go, Charest’s mastery of French allowed him to stand out and deliver more complete answers than the five other candidates, whose French ranged from very good (Poilievre) to near nonexistent (Baber and Lewis).

But he was visibly uncomfortable and less loquacious when grilled again (as in previous debates) by Poilievre on his advisory work he did for Huawei after China detained Canadians Michael Kovrig and Michael Spavor.

Charest slowly repeated that none of his work with Huawei was done against Canada’s interests, while Poilievre dogged him with questions about how much money the Chinese film paid him during the contract.

The first debate question pitting one candidate against the other was on the Roxham Road border entry in Quebec, which has seen a steady stream of illegal immigrants. “What will you do to deal with illegal border crossings?” Fortin asked.

Only Charest responded to the question directly, promising to renegotiate the Safe Third Country agreement with the U.S. in order to integrate the refugees in an “orderly fashion.”

Poilievre said he wants to focus on removing the barriers to immigration, adding with a smile that, “I wouldn’t have a wife without immigration.” (His wife was born in Venezuela.)

Brown used the segment to take a shot against Poilievre, accusing the MP of having endorsed Ottawa convoy organizer Pat King’s anti-immigration views and taking issue with his use of the phrase “Anglo-Saxon words” in a recent interview on Jordan Peterson’s podcast.

“How can we grow our tent when he’s using words like that?” asked Brown.

Poilievre shot back by saying that, “Nobody can believe you, Mr. Brown.”

Poilievre and Brown continued their fight into the next segment on public safety when they each accused the other of breaking one law or another.

Poilievre said that Brown broke Ontario’s ethics rules in 2018 when he failed to disclose a $375,000 loan from a close friend as leader of the Ontario Progressive Conservatives for his $2-million mortgage for a Lake Simcoe home.

Brown shot back, “The only person here who broke the law with Elections Canada is Mr. Poilievre.” He was referring to an incident in 2015 when Poilievre wore a party-branded shirt to a government press conference. He was found guilty of breaking election rules two years later.

“I believe the question was on public security?” Charest jumped in, before sarcastically wondering how Poilievre could speak on the issue after “supporting” the “illegal” Freedom Convoy blockades in Ottawa.

The crowd then broke out into competing “Charest” and “Poilievre” chants.

“This debate is something else. Audience definitely engaged — but how could they not given the brawling on stage,” former Conservative leadership candidate and MP Lisa MacCormack Raitt wrote on social media.

When the discussion turned to Quebec’s bill 21 on religious signs, Brown and Charest took turns accusing Poilievre of not having the same position depending on who he’s speaking to.

“Are you bilingual or not, Mr. Poilievre?” added a visibly amused Charest.

Speaking French proved to be a challenge for most candidates.

Baber apologized for the quality of his French in his opening speech, saying he’s been taking French lessons at 7 a.m. and promising to improve it.

Lewis, who could barely align a few words in French in the previous leadership race in 2020, continued to struggle to speak in the langue de Molière. She stuck largely to reading her prepared notes. She has been taking French lessons and spent the past few days meeting supporters in Quebec.

But she earned a supportive laugh from both the crowd and Charest when she accused Poilievre of being “in the potato field” with his policies on cryptocurrencies and bitcoin.

Aitchison impressed more than one viewer with a better mastery of the language than he’d led anyone believe, but he was mostly quiet during the open debate periods.

He did manage to make the crowd erupt in laughter during his closing statement when he deliberately repeated his website.

“Scott, I think I missed the website… what is it already?” chuckled Poilievre.