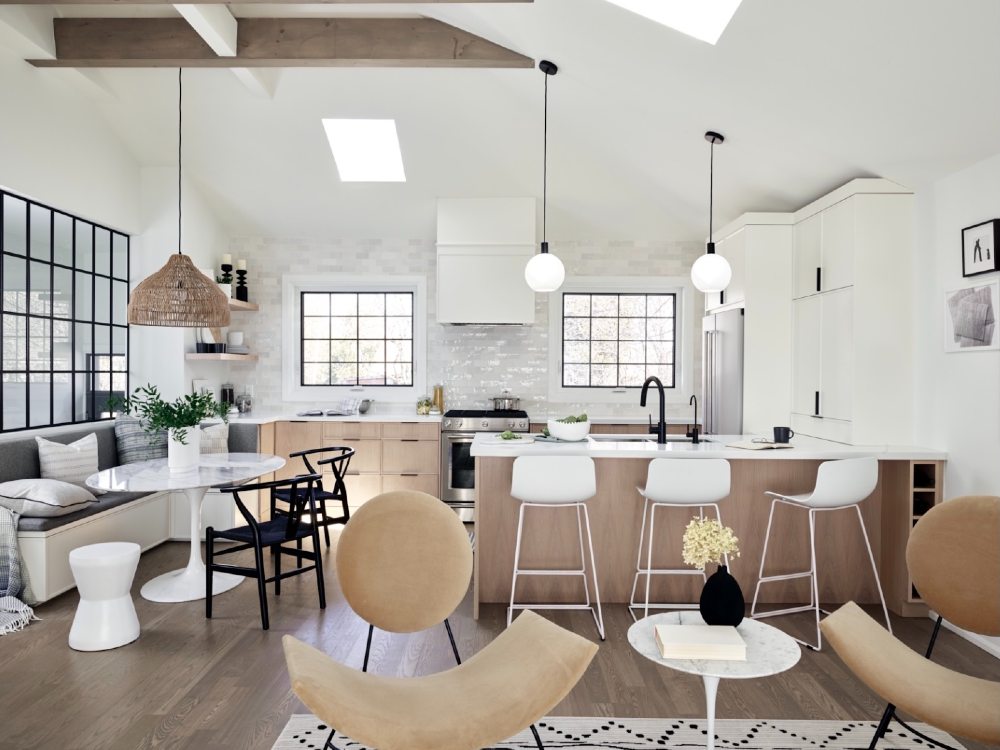 Small bungalows are fantastic for the creaky-kneed age-in-place group. And they make spectacular mid-century modern pads for hipsters sans kids, given all that open-plan room to plop in an Eames lounger in its ideal habitat. But growing families with young kids don’t do well in them, unless they’re careful with how much stuff they bring into their home – and kids come with stuff. So much stuff.

Which is why it’s perplexing that Brian McCourt, an expert on such things, doesn’t always recommend families top off a one-storey structure or build an addition. Sometimes all you need is to rethink your ceiling.

“Bungalows are known for having no character. There’s not a lot going on in them,” says McCourt, of Brian McCourt Design Build, the hammer-wielding co-host, contractor and designer from HGTV’s Backyard Builds.

“You expect a bungalow to have eight-foot ceilings and small baseboards — really builder basic,” says McCourt. “But there is untapped space in the attic. If you restructure it, it can be incredible.”

McCourt advises popping out the attic to create an airy interior, effectively creating the illusion that the house is bigger than it is. The vaulted ceiling or “loft-bungalow” as McCourt calls it is to be distinguished from the “bungaloft,” an elevated, useable area overlooking the main floor.

But isn’t an attic necessary? “It provides ventilation and insulation,” explains McCourt. “In the 1950s bungalow, they did double-brick construction and no insulation in between. It was drafty and inefficient” hence traditional attics. “Technology has made it possible to not need an attic,” he says. “Spray-foam insulation gets great R-value within four inches of space.”

McCourt took that vaulted-ceiling approach in a bungalow in Mississauga. The family of four, with two daughters under the age of seven, felt cramped in their 1950s abode, which is 950 square feet. They had lived there for a decade. Peach-beige walls and mismatched make-do furniture were also uninspiring. The average ceiling height made the house feel small, as did the T wall that bisected the living and dining areas from the kitchen.

The couple debated doing an addition or extension but McCourt talked them out of it. “We try to convince people to not be wasteful, to live in their space and live in it well instead of creating new (one),” says McCourt. “Sometimes it’s about better space rather than more space.”

In the end, McCourt tackled the basement to make it welcoming, giving the family room for their toy overload in the process. He also designed an attractive deck, so they could enjoy the backyard as an extension of their living space.

But the most magnificent transformation is to the main floor. The soaring ceiling — 16 feet at its peak — has beams and two skylights making the home airy and bright. Crisp white paint throughout is also fresh and modern, while windows, lighting and a faucet, all black, add definition and oomph to the palette.

In its roomier setting, the new two-tone kitchen shines. A banquette and stools at the peninsula are perfect for kids. “The kitchen backsplash has a handmade tile — some glossy, some matte, so you get this beautiful variation and texture,” says McCourt. The banquette has storage for seasonal gear that’s switched in summer and winter.

Even the fridge was carefully considered. McCourt snagged a stainless-steel model, but “it felt too industrial and cold, so we sent it to an auto-body shop to be painted,” he says. “It’s greyish, done in Benjamin Moore’s matte White Dove, and feels friendly and integrated.”

In the living room, meanwhile, a new electric fireplace features plaster brick veneer from Century Architexture that looks like the real thing, and a stylish slot above to showcase logs. At three-quarters of an inch thick, they’re for aesthetics only.

All this is to say, oftentimes what a family needs is not a house extension but better function, says McCourt. “You get into the groove of the everyday and you don’t realize, until a professional comes in that more cabinets or better organization can improve your life,” says McCourt.

The loft-bungalow “is such a massive improvement to how the space feels,” says McCourt. “You walk into the home and you feel great.”