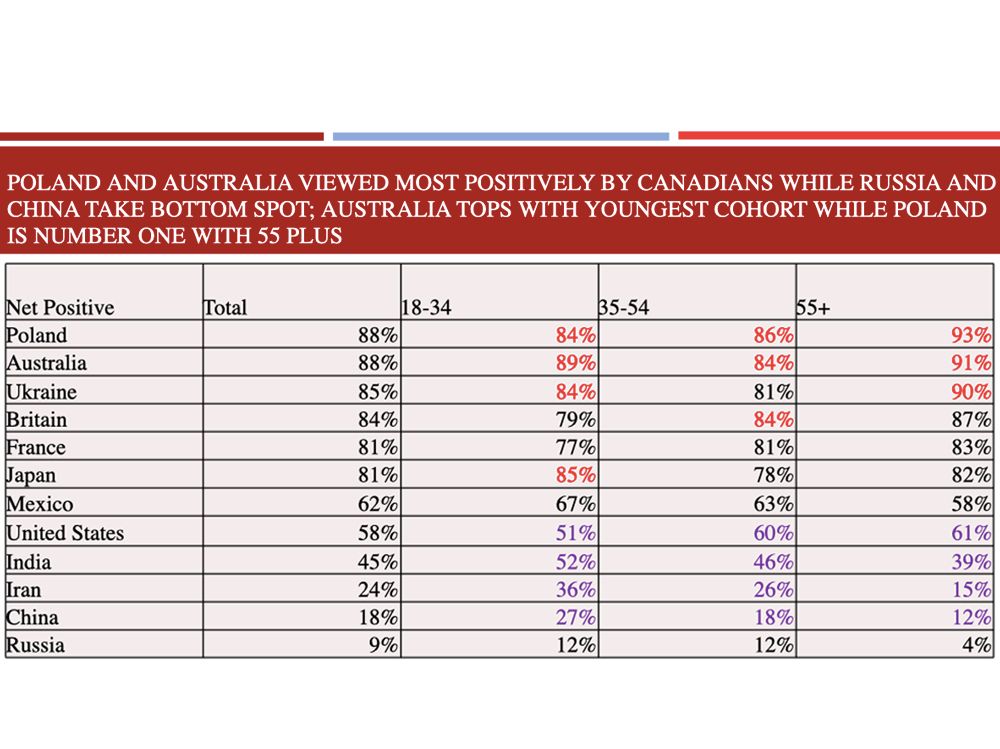 A 2022 Leger survey for the Association for Canadian Studies shows that Poland was ranked first by Canadians when asked which countries were viewed most positively.

The survey attributes Canadians’ positive view to Poland’s giving shelter to Ukrainian refugees since the beginning of the Russian invasion earlier this year.

“I think Canadians view very favourably the acceptance of record numbers of Ukrainians by the Poles as Canadians in the same poll reveal a very positive view of Ukrainians,” said the president of the association, Jack Jedwab. “Thus the Poles get high marks for the unparalleled assistance offered to Ukrainians during the crisis.”

Australia, tied with Poland for first, was the popular choice (89 per cent) for those aged 18 to 34, whereas Canadians aged 55 and older opted for Poland (93 per cent) as their most favourably viewed country.

Of the 1,534 people who were surveyed in May across Canada, Poland was the top choice in every province except in Quebec and Ontario, where Australia took the number one spot.

Because Canada has a deep history of diplomacy with Ukraine, Russia took the bottom spot with an overall favourability of 9 per cent. China came in second to last with an 18 per cent favourability among Canadians.

In the wake of the devastating school shooting in Texas on Tuesday that left at least 19 children dead, Canadians’ views of Americans come as no surprise. Although the survey was conducted prior to the event, such factors reflect some of negative views that Canadians express about the United States as a country.

The survey uncovered  a steady gap — with Americans much more likely to view Canada favourably (87 per cent as of February 2022) than Canadians view the United States (58 per cent).

In a gallup poll released in March 2022, Americans’ view of Canada dropped from February 2021 (92 per cent) to February 2022 (87 per cent), but Canada still remains the country most favourably viewed by the United States.

“Canadians in our previous polls have a very positive opinion of Joe Biden,” said Jedwab. “Hence the negative views are, in my view, more about the perceived ideological direction that has characterized much of the U.S. over the past six years.”