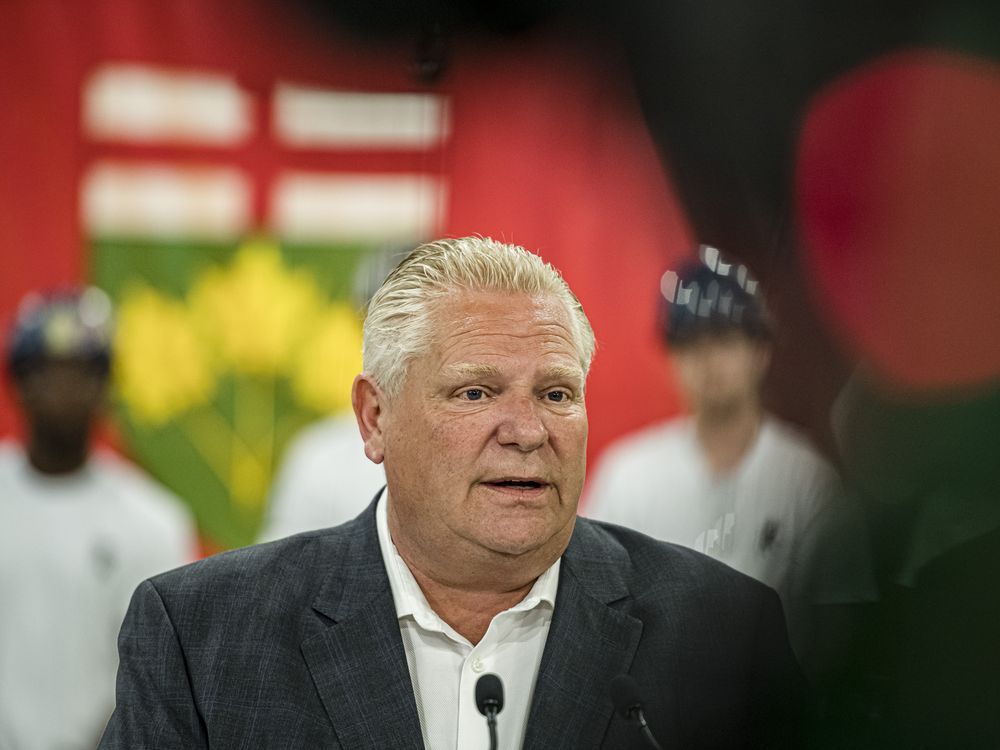 With the Ontario election entering the home stretch, indications suggest a tumultuous session as Doug Ford’s PCs prepare for a second majority mandate at Queen’s Park.

Wednesday’s latest Postmedia/Leger poll suggests the lead enjoyed by the Tories throughout the campaign remains strong, with 38 per cent of respondents intending to vote PC.

Steven Del Duca’s Liberals dropped from 28 to 26 per cent from last week, with the NDP increasing by one to 24 per cent.

But while nearly every poll portents another big PC win, McMaster Political Science Professor Peter Graefe said the undecided vote may have something to say about it.

“As Andrea Horwath’s last act, does she have the rabbits to pull out of her hat to convince a bunch of those Liberal voters to come towards the NDP?” he asked.

About 44 per cent of those polled said their decision wasn’t final.

Across the three big parties, Liberal supporters were the least firm, with only 43 per cent saying their mind was made up.

That’s compared to 64 per cent of decided PC voters and 67 per cent of NDP supporters claiming their vote is final.

A curious metric in many polls — including Leger’s numbers — suggest torrents of discontent boiling in the Ontario Liberal Party, particularly concerning confidence in their leader.

“You have a Liberal base, where if you ask them who would make the best premier, less than half of them are willing to say Steven Del Duca,” Graefe said.

When asked who they think will form Ontario’s next government, only 35 per cent of declared Liberal voters said Del Duca, while 41 per cent of the same people thought a Doug Ford victory was inevitable.

Only 45 per cent of Liberals said Del Duca was the best choice for Premier — compared to 81 per cent of PCs, 73 per cent of NDP and 54 per cent of Greens who thought their party leader was the person to run the province.

“That’s an incredible sign of disenchantment in the (Liberal) campaign,” Graefe explained.

“It’s also the party with the softest vote in terms of people saying they might vote for another party — you know that their decision isn’t firm.”

Fifty-five per cent of all respondents said Ford’s PCs will form the next government — the first time its surpassed 50 per cent.

Twenty-two per cent said either Del Duca or Horwath would win, one point less than those who answered “I don’t know.”

Leger’s Andrew Enns said this illustrates the challenges faced by the Liberals in punching through the PC’s message.

“Steven Del Duca has probably not solidified his bona fides with the voters,” he said.

When asked to rank a series of attributes for the leaders of the big three parties, respondents assigned “out of touch” (26 per cent,) “uncaring,” (25 per cent,) and “gets things done,” (25 per cent) to PC leader Doug Ford.

Attributes assigned to NDP Leader Andrea Horwath were almost statistically tied between “not ready to govern” and “ready to govern.”

At 29 per cent, the top attribute assigned to the Liberal leader was “don’t know,” with “not ready to govern” and “boring” rounding out the top three.

Just under 70 per cent of Liberal voters chose the NDP as their second choice, making the New Democrats the top second choice for all declared voters.

“The opportunity is there for Andrea Horwath to find another four or five per cent of the electorate,” Graefe said.

“The numbers are there for the possibility of a late NDP surge.”

“Some surprises are possible,” he said, explaining some hotly-contested regions — including Hamilton/Niagara and even within Toronto — could produce a surprise or two.

“There’s a scenario here where the PCs come back with potentially an enhanced majority,” Enns said

“The way the splits work out, they could come back with actually a few additional seats than they had going in.”

With both the NDP and Liberals likely not forming government on June 2, questions are swirling about the future of both leaders after election day.

“This is her best shot at becoming premier, and if it doesn’t come off I suspect she may move on to other things,” Graefe said of Horwath.