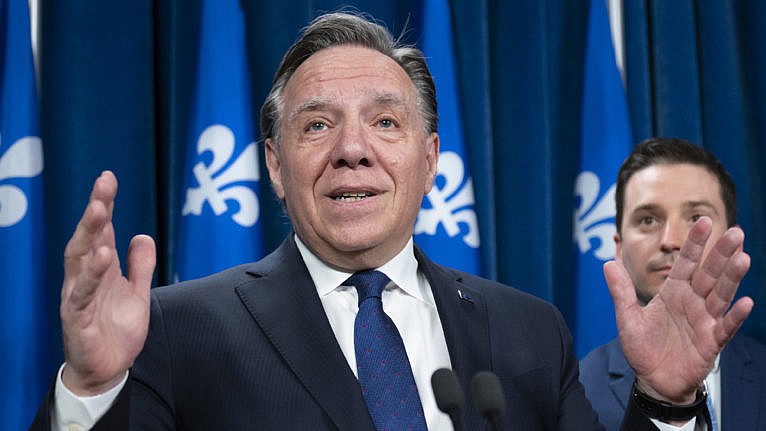 CAQ and Québec Solidaire MNAs voted Tuesday to pass Bill 96, language legislation that “delves into almost all aspects of the daily lives of Quebecers: from who has access to English CEGEPs, the language of the workplace and even the name of an electoral riding,” the Gazette reports. The bill was opposed by the Liberals and by the Parti Quebecois, who held back on announcing how they would vote until the last minute. The vote was 78 for, 29 opposed.

Concerned: Justin Trudeau has concerns about the bill but doesn’t say what he will do about it, the Globe reports.

Andrew Coyne had a good column about the bill in Friday’s Globe, pointing out questionable measures.

A doctor, for example, would not be permitted, even in the privacy of her own office, to speak with her patient in English – or Mandarin, or any other language – even if that were the preferred language of both parties. The only exceptions: members of the province’s “historic” English-speaking minority, as defined under existing law – that is, those who attended English school in Canada; and immigrants of less than six months’ residency.

Recalling centaur: In la Presse on Tuesday, Yves Boisvert writes about Lucien Bouchard’s 1996 “centaur speech,” in which he sketched out a view of Quebec society that reassured its anglo minority, and wonders when François Legault will deliver a similar message. (translation)

On the other hand: In le Journal de Montréal, Mathieu Bock-Côté laments that Legault didn’t have the courage to go farther, and expresses withering disdain for those with misgivings about the law (translation).

The insane reaction of the Anglophone community to Bill 96 shows us how many of them in its ranks no longer even want to pretend to respect the principle of French Quebec. They equate this with ethnolinguistic supremacy. It’s odious. The reaction of part of the French-speaking elite to the 96 project also shows us that it has the intellectual consistency of dead wood.

Airport delays: A group representing global airlines called Tuesday for the Canadian government to drop the remaining COVID-19 travel rules to reduce the delays people face at airports, the Globe reports. A shortage of the staff has led to delays that leave passengers fuming.

Passengers to blame? In the Post, Kelly McParland considers the situation and concludes that Omar Alghabra was wrong to blame passengers.

The backlog at Pearson International Airport grew so pronounced that some weary passengers were forced to bed down for the night wherever they could find space. Others spent hours in search of bags that somehow wandered to spots all over the conveyor system. The Greater Toronto Airport Authority, which runs the airport, put much of the responsibility on the airlines and the federal government. The airlines claimed it was Ottawa’s fault, while Ottawa — well, we already know what Ottawa thinks, thanks to Minister Alghabra.

Fox threat: A task force of intelligence experts says Canada will have to grapple with the growing influence of anti-democratic forces in the United States — including the threat posed by Fox News, CBC reports: “The United States is and will remain our closest ally, but it could also become a source of threat and instability.”

Bad finances: Canadian households are reporting a deterioration of their finances, polling by Nanos Research for Bloomberg News shows. The number of Canadians who say their finances are worse today than a year earlier has reached 41 per cent, the second-highest reading for this question in surveys going back to 2008.

Tax cut sought: Pierre Poilievre, who may be aware that people are fretting about their household budgets, is calling on the Liberals to scrap taxes on gasoline for the summer, CBC reports.

Retailers are routinely charging more than $2 a litre in markets like Vancouver, Toronto, Ottawa, Montreal and Atlantic Canada. In an effort to capitalize on discontent over these higher prices, Poilievre sent a letter to Finance Minister Chrystia Freeland Tuesday demanding that Ottawa “give people a break” by eliminating the gas tax, carbon tax and GST on gasoline sales this summer.

Looking good: In the Globe, John Ibbitson writes that if “suburban Ontario votes in this election based on concerns over inflation in general and gas prices in particular, the vote on June 2 could deliver a second majority government for Mr. Ford.”

Changed man: Ford should benefit from an admiring profile on the front page of the Tuesday Star, which contrasts with a recent Global report that pressed the premier on his failure to let the media know his whereabouts as the campaign nears the finish line.

High hopes: Expectations are high for Jean Charest going into tonight’s French-language CPC leadership debate, CP reports. Of the candidates, only Charest and Pierre Poilievre are considered to be fluently bilingual.

Ammo for Ukraine: Canada is sending 20,000 rounds of artillery ammunition to Ukraine at a cost of $98 million, the Globe reports. Canada is spending nearly $100 milllion to purchase the 155 mm NATO-standard ammunition from the United States. Vladimir Zelensky thanked Justin Trudeau on Twitter.

Cash to Iran: The head of Iran’s national soccer team says Canada Soccer is paying Iran’s soccer federation $400,000 to play a friendly game next month in Vancouver, CBC reports. Victims who lost loved ones on Flight PS752 have called the game a slap in the face. Eighty-five Canadians and permanent residents were killed when Iran shot down the flight.

Religious exemptions: More federal public servants got out of the government’s COVID-19 vaccination mandate for religious reasons than for medical concerns, the Star reports.