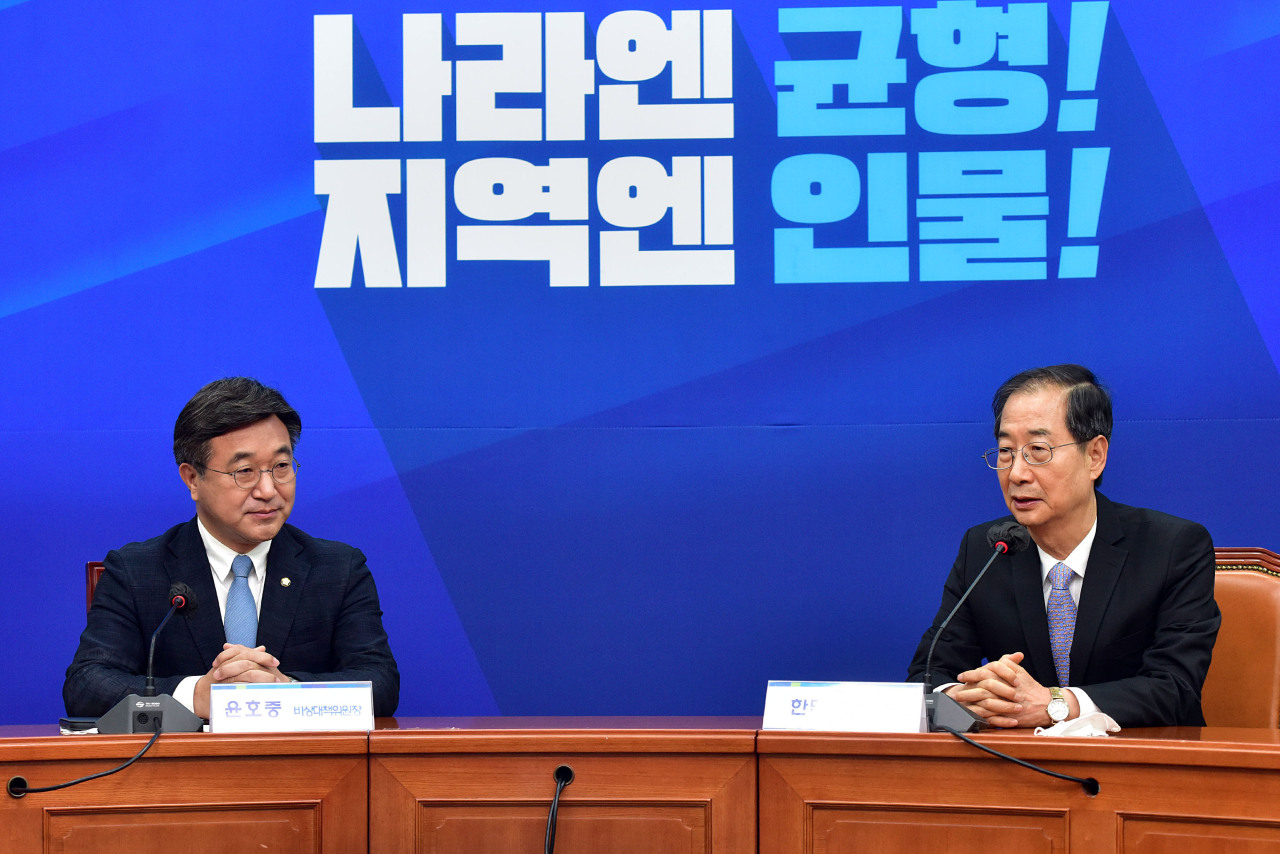 Prime Minister Han Duck-soo on Tuesday met with Rep. Yun Ho-jung, a co-chair of the Democratic Party of Korea’s interim leadership committee, in a gesture seeking cooperation from the country’s main opposition party.

On Tuesday, Prime Minister Han had visited Yun first before he met with leaders of the ruling People Power Party. This move showed his enthusiasm to cooperate with the opposition party, at least on the surface.

Han and Yun agreed on holding regular sessions between the government and the country’s major political parties during their meeting at the National Assembly in Seoul on Tuesday.

During his talk with the prime minister, Yun requested the government to initiate close communication with the National Assembly in dealing with state affairs. In reference to surging inflation and other risks facing the country, Yun said: “To solve these issues, the president and the government should lend an ear to the voices of citizens.”

He added, “I ask the government to closely communicate with the National Assembly, which represents those people.”

To Yun’s request, Han pledged to make sure that the government will consult with the National Assembly through regular sessions.

Yun also asked Han to “deliver the National Assembly’s opinions to the president in their entirety, without any omissions and advise the president if his judgment is found wrongful.”

“As the country’s prime minister, I will speak to the president about whatever that is required in my position to say. I will not hesitate to speak, keeping in mind that it is my last opportunity to serve the country,” said Han.

On Han’s visit to the southeastern rural village of Bongha on Monday to pay his respects to the late President Roh Moo-hyun, Yun thanked Han. It was the first time that such large numbers of conservative government officials attended a memorial service for the late liberal president.

Han said he remembers Roh as a president who stressed communication and political cooperation.

“While serving as the last prime minister of the Roh administration, I learned a great deal (from him) about managing state affairs,” he said.

On the new administration’s deregulation initiatives, however, Yun expressed concern.

“Corporate responsibility and potential damages on the labor side should be discussed when talking about deregulation,” Yun said.

Han agreed with Yun, saying: “Freedom and responsibility are two sides of the same coin.” Han added that the government will consult with the National Assembly before taking deregulation initiatives.