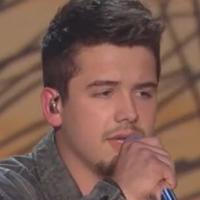 Needing a push from his best friend to simply audition, Noah Thompson is now the Season 20 winner of “American Idol.”

The country singer from Louisa, Kentucky, defeated HunterGirl and Leah Marlene on Sunday to become the first Kentuckian to win the long-running singing competition.

Thompson impressed judges throughout the season with his country vocals, but also stepped outside of his comfort zone at times while performing songs by Rihanna, Harry Styles and John Mayer.

More than 16 million votes were cast throughout the country during Sunday’s finale.

“My heart is beating out of my chest,” Thompson said after being named the winner.

The three finalists began the show by each performing a song from Bruce Springsteen’s wide catalog of music — Thompson choosing “I’m On Fire.”

Judge Katy Perry told Thompson he “swooped in and grabbed every heart in America by singing that song.”

Echoing a comment he gave earlier in the season, fellow judge Luke Bryan said Thompson is “the king of ‘aw shucks.’”

“We’ve got the boy out here doing Bruce Springsteen, we’ve got him doing Disney songs, Rihanna. That’s a long way from that first audition,” Bryan said, referencing when Thompson performed “Giving You Up” by Kameron Marlowe. “Let me just say I’m so proud of how you handled this with such humility, that ‘aw shucks’ country boy thing.”

For his second performance, Thompson performed his debut single, “One Day Tonight.” The song debuted at No. 3 earlier in the week on the iTunes country chart, according to Taste of Country.

“I’m telling you my friend, you are on to something fabulous,” judge Lionel Richie said.

The Louisa native was also shown in the episode returning to his hometown and to Lawrence County High School, where Marlowe joined him on stage for a performance in front of thousands.

Marlene was eliminated after each singer’s first two performances, leaving Thompson and HunterGirl to battle for the title of “American Idol” champion.

Thompson later joined the stage with iconic singer Melissa Etheridge, and the two performed her 1993 hit song “I’m the Only One.”

Thompson’s journey on “American Idol” began with a push from his best friend, Arthur, who signed up his coworker for the show.

“He wasn’t going to sign himself up,” Arthur said during Thompson’s audition.

Bryan told Thompson earlier in the season that “there’s a magic quality going on in your voice,” while Richie told him, “You’ve got a real life storytelling bada— voice. It’s believable.”

And he’s received plenty of support from his community back in Kentucky, who made their voices heard to help Thompson continue to advance on the show.