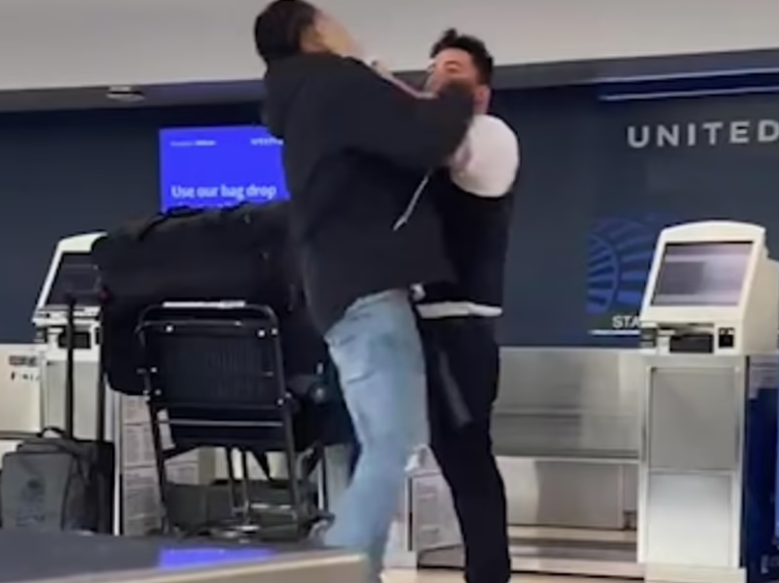 Thirty-odd years ago, United Airlines advertising featured the slogan “Come fly the friendly skies.” As various news reports have shown, though, those “skies” have undergone a mood shift recently, as have most of us. Now, occasional incidents in the air with unruly passengers reflect the stress people are feeling from the pandemic and its wider effects on travellers and employees alike.

Indeed, the airline has outwardly acknowledged this with its Twitter creed: It offers “live, 24/7 support for any and all plot twists.”

Well, here’s one for the times, albeit in the terminal. On Thursday morning at the Newark, N.J. airport, someone took video of an altercation between a passenger and a uniformed United staffer in which they exchanged slaps, shoves and punches that ended up with the worker stumbling backwards, tripping over luggage and landing on his back behind a check-in kiosk.

Despite — or because of — being bloodied, the staffer paused only for a brief second before returning to his sparring partner — who, as it turns out, was ex-NFL player Brandon Langley, now on the Calgary Stampeders roster.

The recording didn’t capture what started the brawl but The Daily Mail noted that it was believed the fight began when the worker asked Langley for the wheelchair he had used to transport his luggage, instead of a luggage cart that would have cost $5.

TMZ reported that Langley claimed not to have thrown the first punch, and other video is said to show that the worker lashed out first.

Langley has been arrested and charged with simple assault and released on his own recognizance, while the unnamed staffer has been fired but it appears he will not face any charges. Langley lashed out at United with this tweet:

u can clearly see soooo many @united employees watching everything unfold while im basically begging for help. craziest part not one of them helped De-escalate the situation! it was like they wanted it to happen. like i had a target on my back