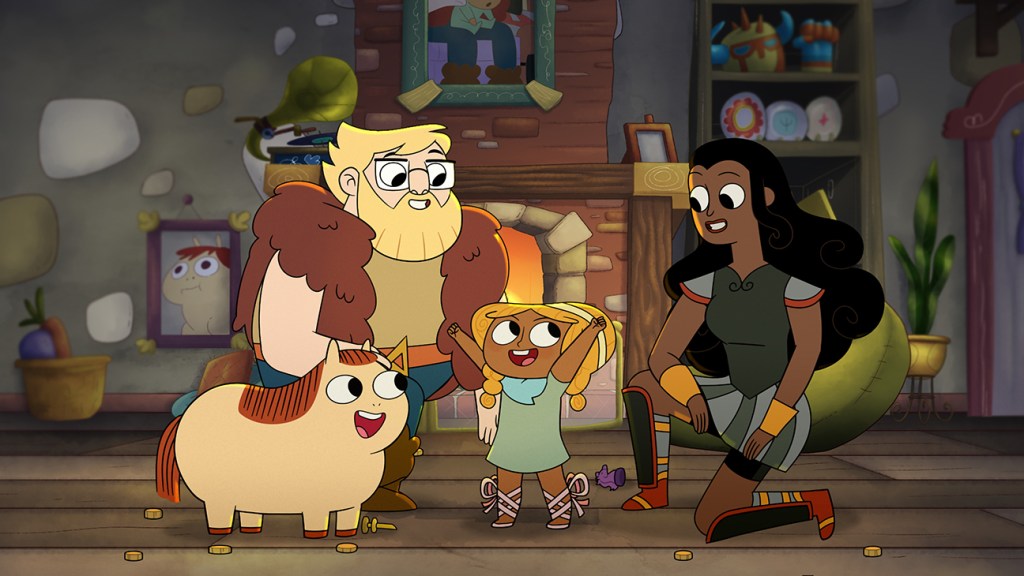 “Pinecone is all about being a warrior and that there’s a certain way you have to be a warrior,” said Stephanie Kaliner, showrunner on the series, based on Kate Beaton’s New York Times best-selling children’s book The Princess and the Pony. “But with Pony’s help, she sees that you can be a cute warrior or a cuddly warrior, or you can be a warrior in ballet slippers. That’s the main lesson of the book, so we tried to translate that message from the book to the show in every way possible.”

That meant both narratively and also through the actual character design for the series, which debuted its first season in April and hails from DreamWorks Animation.

“You think a wizard has to look this certain way, like Gandalf the Grey, but we always wanted to show that, no, a wizard could look more like this. Or you see the really beefy muscular guy in the first episode’s competition and think he can wear a flower suit and be dressed like a daisy,” Kaliner added. “That was a big part of the conversation. Anything that felt like low-hanging fruit or a trope that feels comfortable because we’ve seen it before, we try to then go in another direction.”

Kaliner said the team always wanted for any person watching to “just be able to feel like they can be part of this world.” But they also wanted to do it without pointing to it in “overt” or heavy-handed ways. So they never wrote in specific discussions about physical, visual or identity diversity in storylines and dialogue in an effort to avoid inadvertently othering anyone to their young viewers.

“We talked about showing the world as you want to see it,” she explained. “We didn’t want anyone in Sturdystone to ever say to each other onscreen, ‘You’re too this,’ ‘You’re too that,’ or you can’t do this and you can do that.”

So while lessons about obvious physical differences between the show’s human-coded characters are absent, leading and background characters are, among other things, racially diverse, LGBTQ, have disabilities, with some wearing hijab and, in another move rarely seen in animation, having various body types and sizes.

The body diversity that exists among the show’s warrior characters and its larger group of magical semi-medieval community residents — whether more or less muscular, shorter or taller, rounder or thinner — makes it a standout among both animated and live-action kids and family series. Within the genre, there’s been a historical focus on teaching children about living a healthy lifestyle through nutrition and physical activity, but rarely intentional representation of how that may look on different bodies offscreen.

“A reflection of the world is not something I see constantly in animation,” Taneka Stotts, Pinecone & Pony‘s story editor, told THR. “I feel we tend to gravitate towards an art style we want to see of leading a happy and healthy lifestyle. But we can lead a healthy lifestyle through many different means and that does not adhere itself to certain body standards.”

The story editor would help lead the charge, their work motivated in part by their own experiences of being different sizes at different times in their life. They also hoped the show would “finally set a precedent that fantasy doesn’t have to exist within one realm of ideals,” especially when it comes to inclusion.

To help the show do this through character designs, the story editor organized time early on with Kaliner, Beaton and the other writers to discuss the lack of body diversity within kids’ cartoons, the results of which were later posed to the show’s storyboard artists and character designers.

Talks would directly impact how at least one of the show’s couples, Wren and Gladys — described by Kaliner as a “badass warrior from another time who is a female Thor but also a female Worf from Star Trek” — turned out. Through them, Stotts addressed how when queer couples are put together in animation, they’re “usually juxtaposed as one larger body and then one thin or petite body.”

“We like to show shapes to kids, and to do that sometimes we go to extremes,” Stotts explained. “We’ll put a block next to a rectangle and then we’ll make one smaller or bigger. But I wanted to see a block next to a block.”

Kaliner confirmed there was “a lot that we threw at the character designers on the show,” who were led by Victoria Evans, but the Pinecone & Pony executive producer also strongly credits Beaton’s book for inspiring her wider inclusive approach to the show. That includes creating the character Pony, a (farting) horse best friend with a rounder body.

Beaton said her own discussion about the pony’s design began between 2008 when she was first writing the Hark! A Vagrant webcomic and 2015, when she published her children’s book. Having endearingly dubbed him “little fat pony,” Beaton became concerned about how pointing out Pony’s size in the book before the princess initially rejects him (as he’s “not the warrior horse of her dreams”) might come across to young readers.

“I have no problem with the word fat. I just didn’t want it to have a negative connotation. I didn’t want kids to read it and think, ‘I don’t want this pony because it’s fat,’” she explained.

That conscientiousness was then applied to all the book’s characters and eventually the show’s. Beaton drew inspiration for Gladys from bodybuilders, looking at older American Gladiators to be true to what happens to their bodies, including developing “a little bit of a belly.” The writer also pointed specifically to the treatment of Pinecone’s father, Arlo, as another example of how the series thought about its representational messaging and responsibilities.

“I was like, I really don’t want him to be a bumbling dad; the inept dad — a Daddy Pig from Peppa Pig or Homer Simpson-type — because he has a bigger body type. There’s so many of those on TV and I feel like if you start ascribing certain traits then we easily fall into stereotypes that we don’t mean to,” Beaton said. “Arlo’s a capable dad. He’s a loving dad. He is quick with affection and very comfortable in his masculinity.”

That desire to have positive body representation also impacted Sturdystone residents young viewers will likely identify with the most: the show’s children. For both the Wiz Kids and Lil Rumblers, the creative team provided personality outlines but offered zero body notes, helping the show deliver a string of season one episodes that feel refreshingly and effortlessly representational for all its characters.

Among them was a Wiz Kid named Celestia that uses forearm crutches and whose real-world-meets-fantasy design was informed by Evans, consultant Kirsten Sharp and Chris Auchter, who designed her.

“We tried to find a blend where you could see her crutches, which look sort of like elk legs,” Kaliner said. “We wanted to make them cool and fantasy, but we also wanted to make them functional. So Chris helped show us where the support would go and also sent videos to share with the animation team about how Celestia would move and how she would put them down when she’s sitting. We wanted to make that feel real to a kid watching.”

And in yet another way the show worked to subvert and defy expectation while supporting its message of body diversity, Pinecone & Pony creatives told THR they were able to execute their vision of character-driven comedy, while never making the laughs about any character’s body.

“I grew up very steeped in comedy and one thing that I learned is that punching down isn’t funny,” Stotts said. “It actually, to me, makes the show stronger when you aren’t relying on old jokes, old narratives and old tropes about someone’s body. There are so many other things available to us to make someone laugh, especially a child. You should be focused on what they find funny, and making fun of their friends is not what they find funny.”