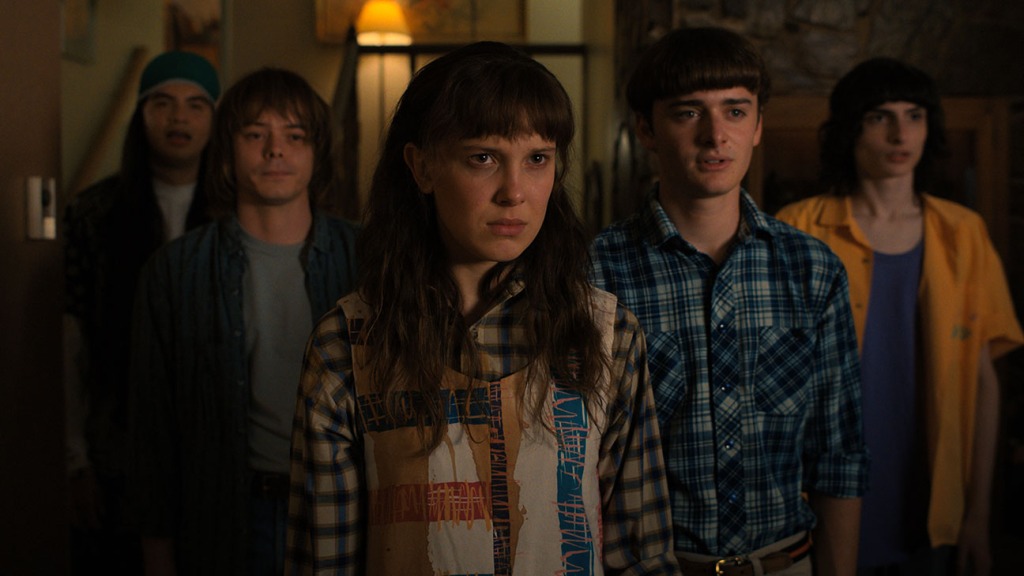 When the Rocky franchise started, Rocky Balboa was a down-on-his-luck, lumpy, beefy palooka, an underdog given a largely lucky opportunity. By Rocky IV, he’s a millionaire with a body chiseled from marble and the only way he can be an underdog is to fight a towering monster in Russia. Mere symbolic victories aren’t enough. He has to end global communism.

I love Rocky IV, but its rousing thrills have almost nothing in common with the likable charm of Rocky.

Sacrifices some charm in a bigger, more ambitious run.


The only reason I wouldn’t say that Stranger Things has reached the Rocky IV stage of its artistic evolution is that the theatrical running time of Rocky IV is 91 minutes — or seven minutes shorter than the last of seven episodes premiering as the first “half” of the show’s penultimate season.

Yes, you read that right. The midseason finale of Stranger Things is 98 minutes, and five of the other six episodes are over 70. If the fourth season of Stranger Things isn’t inspired at least partially by Rocky IV, that might be the only seminal film from the ’80s not to influence the Duffer Brothers in an ever-expanding pastiche that no longer seems capable of fitting into the boundaries of traditional television. Or else nobody at Netflix has the authority or desire to enforce those boundaries.

With two more unseen feature-length episodes coming in July,  the fourth season of Stranger Things is the biggest, scariest, most ambitious Stranger Things season yet. It’s also the least charming, least funny and least inventive season yet, which doesn’t mean that those elements are wholly lacking, just that the effort to concentrate on moments of human relatability often gets overwhelmed by the attempts at scale.

It’s six months after the so-called Battle of Starcourt.

Believing Hopper (David Harbour) to be dead, Joyce (Winona Ryder) has left Indiana for a Spielbergian California suburb with Will (Noah Schnapp), Jonathan (Charlie Heaton) and Eleven (Millie Bobby Brown). Eleven, struggling with life without her powers, misses Mike (Finn Wolfhard). Jonathan misses Nancy (Natalia Dyer), but he may not be completely into her expectations that they’ll be reunited in college.

Back in Hawkins, Mike and Dustin (Gaten Matarazzo) have found a nerdy niche in a D&D club led by new addition Eddie Munson (Joseph Quinn). Lucas (Caleb McLaughlin) has expanded his social circle warming the bench for the basketball team and Max (Sadie Sink) is generally brooding. Nancy is working hard on the school newspaper and Steve (Joe Keery) and Robin (Maya Hawke) have traded in their mall jobs to work at a video store, giving the Duffy Brothers many more options for cinematic references.

Then people start dying under the goriest of circumstances — this is the most violent and frequently gross Stranger Things season to date — and it all ties back to the Upside Down.

Meanwhile, Hopper isn’t as dead as Joyce thinks. In fact, he’s very much alive and struggling in a Soviet gulag.

That’s a lot, and that’s before you start getting into most of the season’s new additions, including Eduardo Franco as a goofy stoner named Argyle, Grace Van Dien as justifiably nervous cheerleader Chrissy, Game of Thrones veteran Tom Wlaschiha as a Russian prison guard and Jamie Campbell Bower credited as “Friendly Orderly.”

When it debuted, and episodes mostly stayed between 40 and 50 minutes, Stranger Things was almost a “small” show. The action all took place in tiny Hawkins, a community that just happened to boast a government research facility and access to a parallel dimension. By the time we reached the second and third seasons, this was something I was complaining about. Hawkins, again? The Upside Down, again? Another demogorgon? And even minor expansions still felt limited and showed a peculiar lack of deep mythological interest in the Upside Down and its creepy inhabitants.

So kudos to the fourth season, which really does give us more details about what was happening with Eleven and her various doctors — Paul Reiser and Matthew Modine return in different capacities — and a much fuller geographical and zoological survey of the Upside Down. There are critters we’ve never seen, with more tentacles and pointy teeth and leathery wings. After the first season kept anything regarding special effects to the bare, cost-cutting minimum, there’s no doubt that Netflix simply opened the special effects bank vault to the directors — the Duffers, Shawn Levy and Nimrod Antal — and said “Do what you need to do.” The results are impressive and frightful and frequently numbing, because the creative workarounds that let the show generate simmering tension without needing to show everything are no longer in evidence.

There are multiple locations, multiple dimensions and multiple timelines, and the characters split up into different permutations. The writers know certain pairings — Dustin & Steve, Robin & Steve, Steve & Anyone Really — are good for comedy and other pairings are good for romance and vulnerability, though there’s very little time for that, which is ridiculous because oh dear Lord these episodes are long. But it’s not all one extended movie, no matter what anybody thinks, because the A-story/B-story/C-story/D-story structure is completely TV-based.

The stories aren’t all of equal interest, and they aren’t all moving at the same rate. Yet too often the editing feels like somebody believes they are, and depending on the episode, different storylines are dragging. The stuff in California, where Mike flies out to join his girlfriend for spring break, is the most conspicuous drag, with the unexpectedly glacial progress of Hopper’s time in Russia as a close second. You could probably pull the Russian scenes out of each episode and merge them into a standalone Russian hour and everything would move better. It’s very obvious that this should have been a 13-episode season that was inexplicably squished into nine episodes with no consideration of the flow that’s best for the telling of this story.

Another problem is the kids. They’ve all grown far more than the story’s timeframe can justify, and one could argue that puberty, along with the monsters in the Upside Down, is the season’s Big Bad. But it isn’t that the young actors have aged awfully or that they’ve diminished as actors with the passing of time. The problem is that the writers haven’t discovered new strengths for them, so they’re stuck doing a lot of the same things, whether it’s Brown’s near-alien intensity, Matarazzo’s reliable comic timing or McLaughlin’s endearing earnestness. Sink, an addition in the second season, has emerged as maybe the best actor in that generation of the cast, and she’s doing more emotional heavy-lifting this season, with a musical assist from Kate Bush.

Nothing with the young kids feels revelatory in the way that Keery did in the second season when the writers realized he was funny or that Dyer has steadily been. There’s a joy that leaps off the screen every time the writers find a way to expand Robin as a character and it’s unclear when it happened, but Hawke has become easily my favorite part of the show, when she could have been an ancillary character.

The grown-ups keep getting new dimensions as well, whether it’s Harbour’s haunted current incarnation of Hopper or Brett Gelman, whose Murray Bauman takes a big leap from recurring amusement to cast regular. You have to ignore that Quinn, Franco and increasingly Heaton all look much closer in age to the Ryder/Harbour segment of the cast than to the Hawkins kids.

The three-year absence keeps a lot of Stranger Things‘ familiar nostalgic moves — direct nods this season include WarGames, Altered States and The NeverEnding Story — from coming across as stale and I respect some efforts to evolve. That doesn’t mean I don’t miss the innocence and warmth, or that I’m not positive that there were seven fantastic 50-minute episodes of TV here, and it can be a little exhausting to sit through 70+-minute episodes to find them. It’s not an underdog anymore.