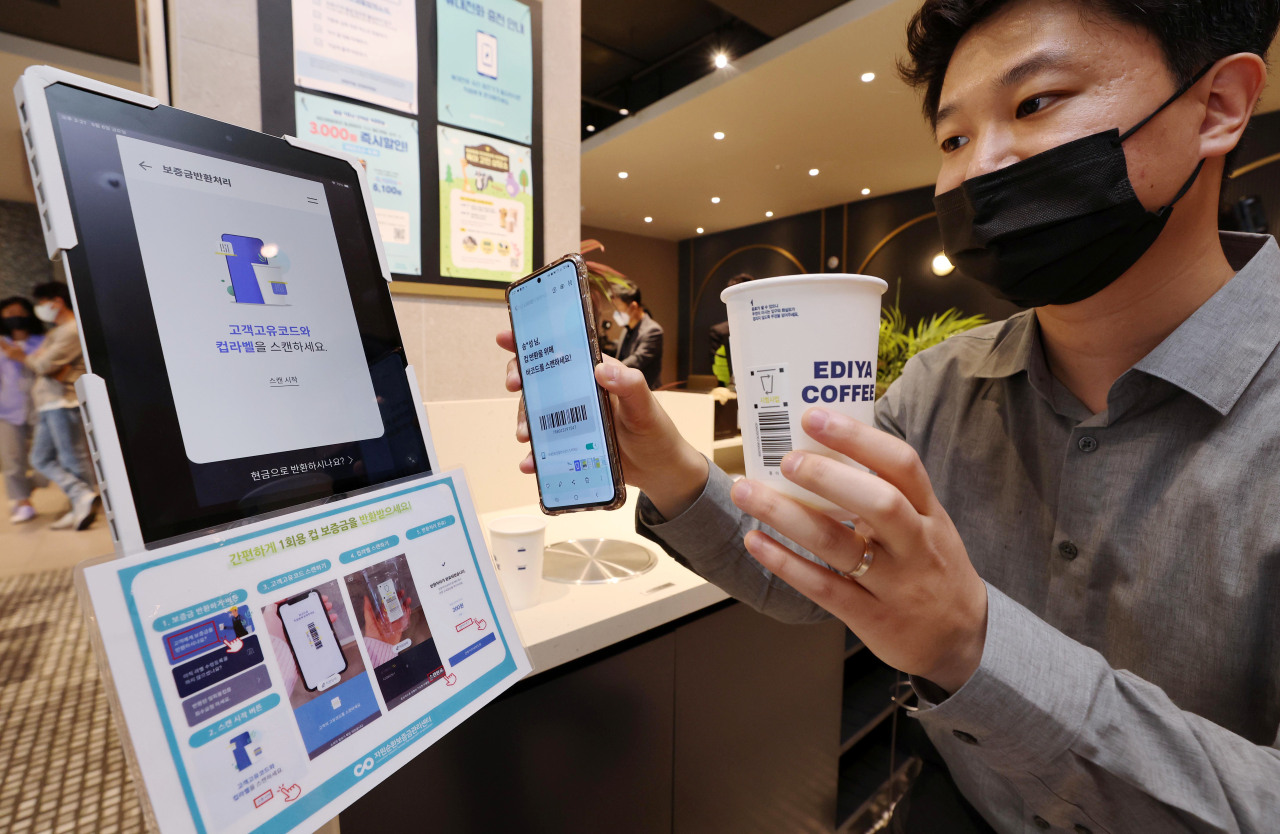 The postponement of the deposit refund scheme for single-use plastic has appeased small-business owners for the time being, but concerns remain.

On Friday, the Ministry of Environment announced that it will postpone the launch of the new deposit system for single-use cups until Dec. 1.

The new scheme was set to kick off on June 10, requiring franchise cafes, bakeries and fast-food franchises with more than 100 branches to charge a 300 won (24 cent) deposit per single-use cup to customers.

Although the measure was drawn up when the Act on the Promotion of Saving and Recycling of Resources was passed in 2020, the ministry has decided to delay the enactment for another six months, three weeks before the launch date.

The ministry, which had been promoting the new measure for months, took a step back after facing backlash from business owners who complained about having to cover most of the expenses under the new measure. For instance, each barcode sticker which has to be attached to the cups for recycling costs 6.99 won.

Other concerns raised include the extra expenses for storing the used cups until recyclers come to pick them up and having to wash the cups.

Responding to the complaints, the ruling party pressured the government to delay the launch. Rep. Sung Il-jong of the People Power Party issued an official statement Wednesday, saying, “The ministry should take immediate action such as revising the enforcement decree to postpone the launch of the new system.”

After holding a meeting with an association of small businesses on Friday, the ministry decided to postpone the launch, saying it understands the burden on business owners.

“During the next six months, we will discuss on measures to cover some of the necessary expenses to lift the burden off the shoulders of business owners,” the ministry’s official statement read.

The Korea Franchise Union, an association of business owners, welcomed the decision, but pointed out the need to discuss details for the new measure which will eventually come in six months.

“We agree with the Ministry of Environment’s purpose of the measure. However, the new measure shifts the burden of expenses on business owners,” the statement read, adding that the government should try to listen to the voices from those on the front lines.

One cafe owner said he is relieved about the postponement.

“I truly understand the need to cut down on plastic cups. I feel bad about using so many, too. I see people throwing them away on the streets which is a real problem,” said the cafe owner surnamed Baek who runs a branch of a franchise cafe in southern Seoul.

“We all know asking customers to bring their own tumblers has its limits. I hope the authorities could come up with something more realistic and practical soon,” he said.

Some, however, are concerned that the Ministry of Environment is taking a step back because of the complaints.

Earlier this year, the ministry decided to exempt businesses from fines when they do not follow the ban on in-store use of single-use products at food service businesses.

Though the ministry has brought back the ban on using some single-use products for sit-in customers at cafes and restaurants, it decided to waive the fine on businesses until after the COVID-19 pandemic, following a request from the presidential transition committee.

The Korea Federation for Environmental Movement expressed doubts about the ministry being able to enforce the new measure successfully in December.

“Franchises that have to take responsibility for single-use cups did not prepare enough for the new deposit system despite having two years for preparation. They passed the responsibility to branch owners making them cover the expenses,” the statement read.

“The ministry also was complacent against the concerns related to the new system,” it continued. “After six months. we need a better model that can involve cafes owned by individuals as well.”