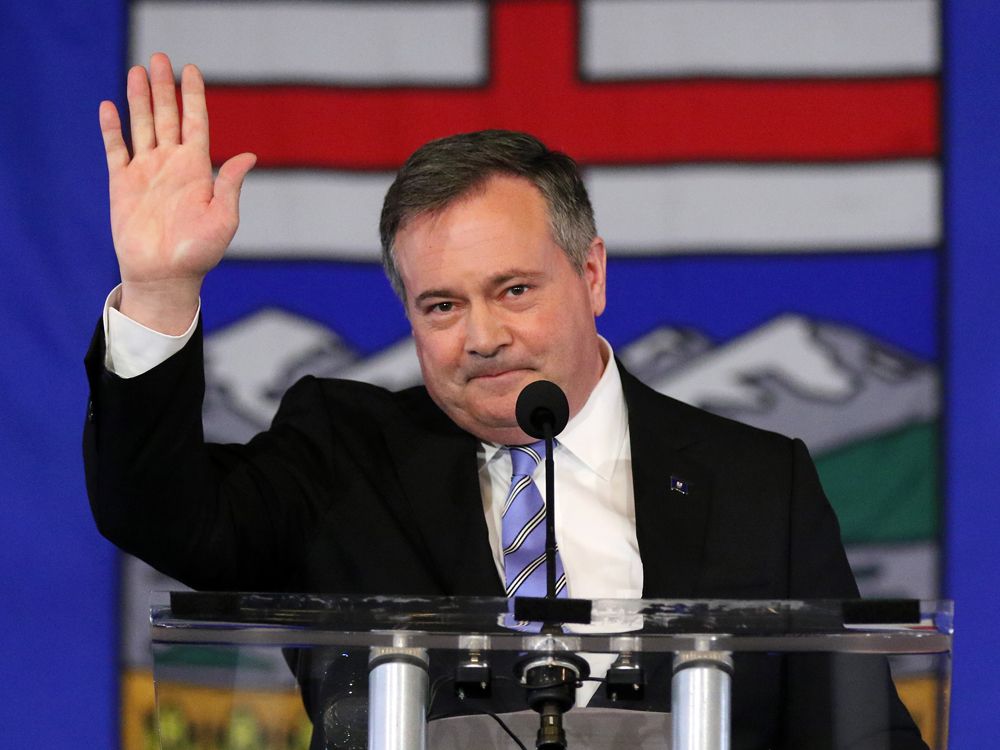 EDMONTON — Alberta Premier Jason Kenney will resign as leader of the United Conservative Party of Alberta.

It will trigger a leadership contest in the very party Kenney was instrumental in building, cobbling together the pieces of the Progressive Conservatives and the Wildrose party.

Kenney intends to stay on as premier until a new leader is chosen, the Calgary Herald’s Don Braid reported late Wednesday night. Unless Kenney is forced out, this would prevent an interim premier from being chosen by the government caucus, which could have happened as early as Thursday.

“The result is not what I hoped for, or frankly, what I expected,” Kenney said in his remarks on Wednesday evening.

The stunning news came just moments after the party announced the results of the leadership review Kenney had been facing. While Kenney won the review — narrowly, by a vote of 51.4 per cent to 48.6 per cent — he deemed it insufficient to stay on as party leader.

“It clearly is not adequate support to continue on as leader, and that is why tonight, I have informed the president of the party of my intention to step down as leader of the United Conservative party,” said Kenney. “I’m sorry, but friends, I truly believe we need to move forward united, we need to put the past behind us and our members — a large number of our members — have asked to clear the air through a leadership election.”

The leadership vote represented the culmination of months of bitterness and discontent within the party’s ranks. And, even with Kenney’s loss, says Duane Bratt, a political scientist at Mount Royal University, the party has some serious divisions to heal over.

“Kenney was the architect, Kenney helped bring them together, Kenney won the large election victory. Well, now you’ve removed all of that stuff,” said Bratt. “What’s the urban-rural gap? What’s the progressive versus Reform-Wildrose gap? What’s the gap between moderates who just want to win versus ideologues who want to enact certain policies?”

It’s a huge fall from grace for Kenney, who returned to Alberta politics in 2015 after years serving in the Harper government in Ottawa. He united Alberta’s two right-wing parties, crushed Rachel Notley’s New Democrats in the 2019 election and embarked upon an ambitious agenda to restore the so-called Alberta advantage.

I want to thank Jason Kenney for his public service.

There are obviously many things about which we don’t agree, but that doesn’t negate the time and sacrifice that goes into taking on the role of Premier.#ableg #yyc #yeg #abpoli

But his UCP government hit headwinds when pipelines were cancelled and major energy projects abandoned. Then the pandemic hit, and Kenney made decisions that turned out to be deeply unpopular with some in his party.

Going into Wednesday’s vote count, just 24 per cent of Albertans approved of the premier, according to polling from the University of Alberta’s Common Ground project. For months, his popularity has been low, and not just because of anger from the progressive wing of Alberta politics or an unimpressed group of swing voters.

“What this leadership race has exposed is a significant activist — loud and angry — element within the party that no leader, frankly, is, really sure how to deal with,” said Matt Solberg, with New West Public Affairs. “The party needs to figure out at some point, very quickly, who they are and what kind of policies and ideas they want represented in that next platform.”

In recent interviews, Kenney said that he would accept the outcome of the leadership review, saying that if he were to lose, he would “in all humility, step aside and thank them for the privilege of having had the best job in Canada.”

The premier has said the leadership review was driven by those who are angry over COVID-19 measures and that he was fighting against them to prevent the party — largely united because of his doing — from slipping into the control of “lunatics.”

The party will now go about preparing for a leadership race, which would be likely to occur at some point in the next three to six months.

Two candidates have already declared their intention to replace Kenney: Brian Jean, a Fort McMurray MLA, recently returned to politics, and Danielle Smith, a former leader of the Wildrose party, who has been working in recent years as a media personality.

In a statement, Jean, who lost to Kenney for the leadership of the party back in 2017, said he wanted to thank Kenney for his “decent and honourable concession.”

“The members have spoken. UCP members from all over Alberta have made it clear that they reject divisive and autocratic leadership,” the statement said. “They want the UCP to be what it was meant to be, a party that can hold the support and goodwill of all types of conservatives and that can successfully fight off the bad anti-freedom and anti-prosperity ideas of Notley’s NDP.”

In her statement, Smith thanked Kenney for his service to the party and province, but lauded the outcome as “a truly grassroots resolution” and said she’d be holding a press conference Thursday morning.

“The membership of the United Conservative Party is hungry for a leader that will be responsive and fight for the interests of Alberta,” said Smith.

With an election roughly one year away, those within the party have said there needs to be far less focus on internecine feuding and far more on preparing to defeat the New Democrats.

The United Conservative Party was forged from the Progressive Conservative and Wildrose parties; the new party, formed in July 2017, has always been a slightly unhappy marriage of right-of-centre conservatives and firebrand populists.

Editor’s note: This story has been updated with new information that Jason Kenney intends to stay on as premier until a new leader is chosen.