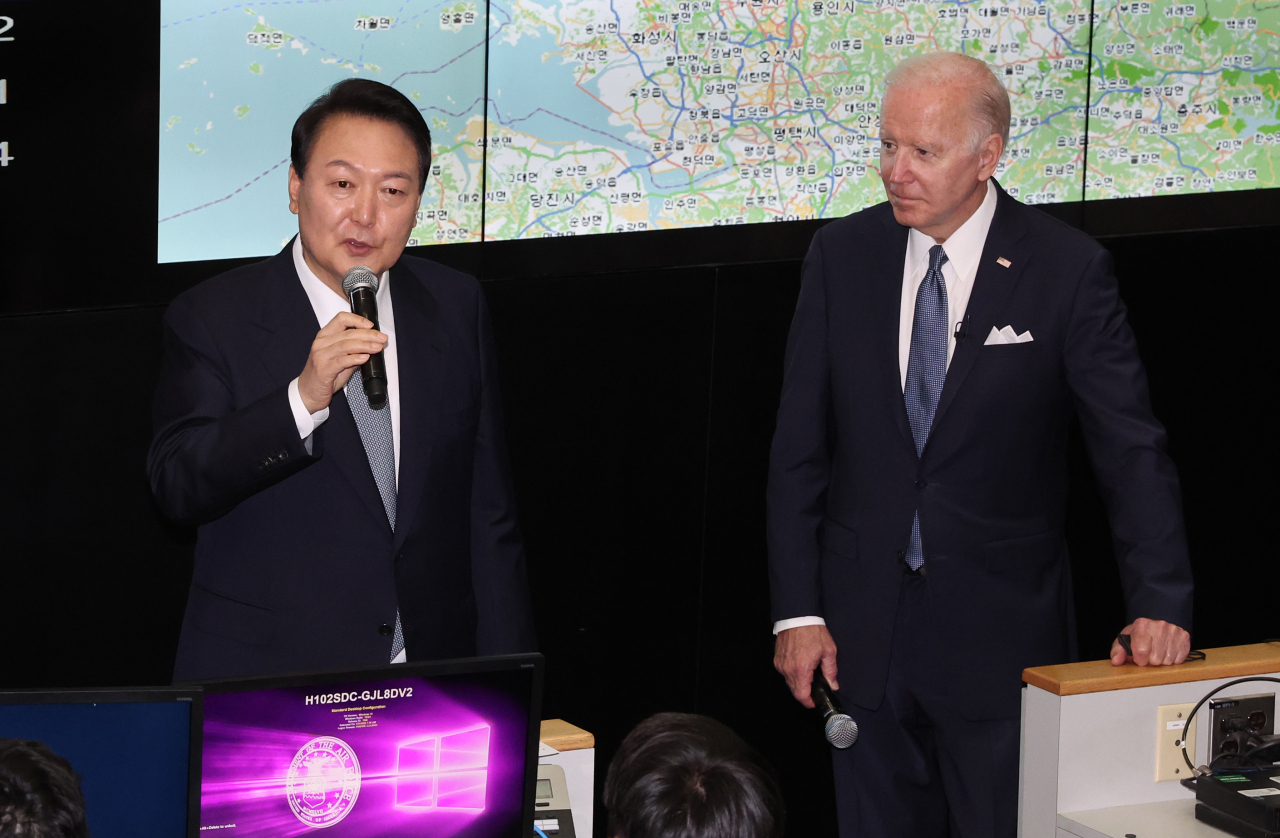 While the two leaders have announced plans to elevate their strategic cooperation in economic and security areas, experts here say the South Korean administration is making an official shift in policy by supporting the US’ Indo-Pacific strategy, which would see the US play a bigger role in the region.

In their first bilateral summit on Saturday, Yoon and Biden expressed their commitments to cooperate closely through the IPEF on the principles of openness, transparency, and inclusiveness.

In a joint statement with Yoon, Biden said he shares his support for “Yoon’s initiative to formulate the ROK’s own Indo-Pacific strategy framework,” recognizing the South Korean government’s desires to expand its presence in the region. ROK refers to Korea’s official name, the Republic of Korea.

While welcoming the US’ Indo-Pacific strategy in the joint statement, Yoon also expressed a commitment to increasing cooperation with Southeast Asian and Pacific Island countries to promote sustainable development, energy security and high-quality transparent investment, as well as high-quality infrastructure.

“The world maintained a principle of common and free trade norms under the supervision of the World Trade Organization. But many blocs were created amid the COVID-19 crisis, and nowadays risks in the supply chain linger,” Yoon said in a press conference after his summit with Biden on Saturday.

The IPEF is an economic initiative aimed at setting up common regional standards for sectors including supply-chain resilience, clean energy, infrastructure, digital trade and cybersecurity. But it is also widely perceived as a regional coalition to exclude China, which is strategically competing against the US in the global supply chain.

With their shared values in the backdrop, the two sides also decided to launch a strategic consultation channel called the Economic Security Dialogue under their respective presidential offices to discuss cooperation on key areas including supply chains, advanced technology and energy.

South Korea’s joining the US-led economic framework and its intentions to play a bigger role in the Indo-Pacific region shows that the Yoon administration is clearly taking the US’ side in the US-China rivalry, experts here said.

“By declaring its participation in the IPEF, the Yoon administration has made clearer its intention to take part in the US’ efforts to reorganize the world order, as in its Indo-Pacific strategies,” Chung Jae-hung, a research fellow at the Sejong Institute told The Korea Herald.

Yoon’s remarks in the latest summit also signals a reorientation of Korea’s foreign policy. It moves away from the previous government’s “New Southern Policy,” in which South Korea took a cautious stance in navigating relations between Washington and Beijing.

“The previous government had distanced itself from similar demands from the US, while the Yoon administration seems to clearly stand on the US’ side,” Chung said.

Chung said the shift in approach will likely elicit a reaction from China. However, this won’t come immediately, as China also has its own difficulties to handle, including the COVID-19 pandemic.

South Korea’s membership in the Regional Comprehensive Economic Partnership — a China-led economic partnership — would also not get much impact since many countries are members, including Japan. In addition, the grouping has not been so active since it was first launched in November 2020, Chung added.

The South Korean government maintains that its shift in foreign policy – namely, joining the IPEF — does not mean it intends to keep China at a distance.

After the summit on Saturday, a National Security Adviser explained under a condition of anonymity that South Korea’s membership in the Regional Comprehensive Economic Partnership and its plan to join the IPEF do not clash in terms of national interest.

“(Korea’s participation in) the RCEP is also the country’s effort to expand and promote economic cooperation in the region, just like the IPEF and the Trans-Pacific Partnership,” the official said.

“Being a member of the RCEP does not mean that we cannot join the IPEF and the Comprehensive and Progressive Trans-Pacific Partnership. I think we should refrain from thinking that China will be happy if we are in RCEP, and get cross with us if we join IPEF,” the official added.

Meanwhile, Yoon showed interest in working more closely with the Quadrilateral Security Dialogue (Quad), a US-led security grouping which includes India, Japan and Australia. The US said it is not considering Seoul’s participation in the group for now.

“It’s natural… to think about ways in which you can work with other like-minded democracies, but I think it’s also important to recognize that the goal right now is to develop and build out what has already been laid out,” a senior US administration official was quoted as saying by Reuters.

The leaders of the Quad’s member countries are set to hold their second face-to-face meeting in Tokyo on Tuesday. It will be the group’s fourth meeting since Biden was inaugurated.