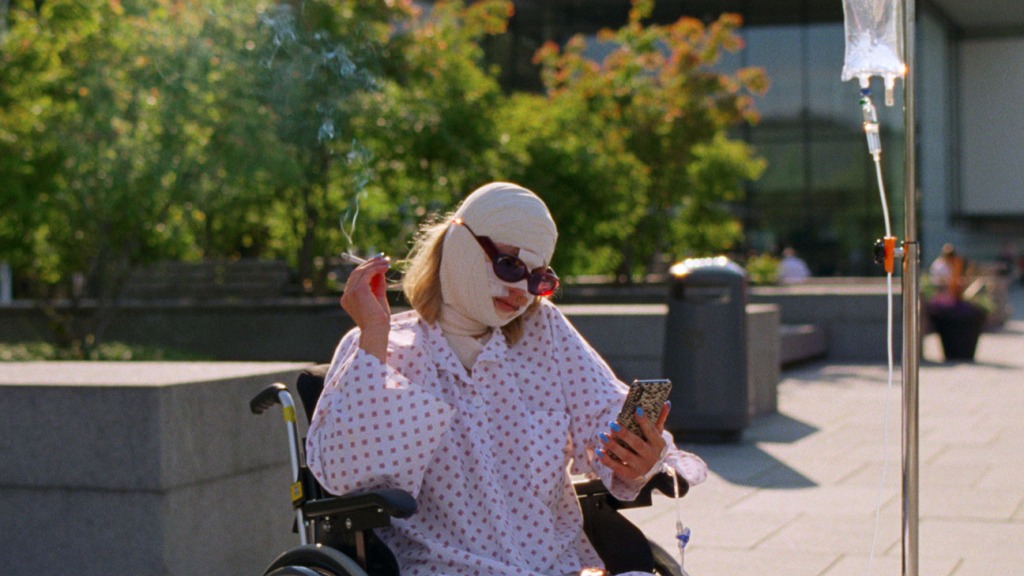 It’s really too bad the title The Worst Person in the World is already taken, because otherwise it’d be a perfect fit for this year’s Oslo-set comedy of young-adult malaise. Sick of Myself centers on Signe (Kristine Kujath Thorp), whose neediness goes into overdrive when her equally self-absorbed artist boyfriend, Thomas (Eirik Sæther), finds modest success with his installations of stolen chairs. Desperate to wrest the spotlight back for herself, she purposely abuses dangerous pharmaceuticals to make herself ill, and basks in the comfort and sympathy that inevitably follow.

It’s a plainly awful act from a plainly awful character, and writer-director Kristoffer Borgli never suggests otherwise or offers excuses for her behavior. But the sly pleasure of Sick of Myself is that Signe’s narcissism differs from the rest of ours more in degree than kind. Her impulses are as uproarious as they are repulsive not because they’re so hard to understand, but because on some level, we can understand them all too well.

The film opens with Signe in a rare moment of unhappiness that she’s being looked at — she’s sure everyone in the restaurant is watching as she and Thomas plot to sneak out without paying for the $2,300 bottle of wine they’ve just ordered. Even in the act of getting away with it, though, she’s eager for recognition. When the waiter chases Thomas down the street demanding he pay up, she’s more miffed than relieved that he’s rushed right past her without noticing her at all.

It’ll be the last and only time in Sick of Myself‘s trim but somewhat unevenly paced 96 minutes that Signe so much as considers rejecting attention. Otherwise, she’s defined by her craving for it, and all the better if it comes at Thomas’ expense. She has a job working at a cafe, but no discernible career goals beyond that; she has friends, but treats them more like wayward subjects than peers. In bed with Thomas, what turns her on is not Thomas himself but the fantasy of being cared about by him. “Ask me again how I’m doing,” she says by way of foreplay, hours after checking out of the hospital for drug-induced bleeding and rashes.

For his part, Thomas is no less vain or petty. The pair’s dynamic is deftly summarized just a few minutes in, during a casual exchange at her birthday party. “People tell me all the time, ‘You should start a podcast. You’re so naturally funny,’” Signe brags to a guest. Thomas turns toward her with a smile. “Who says that?” he asks, his voice light but the insult obvious. In their own twisted way, they’re a perfect match — locked in an endless cycle of belittling and one-upping each other for sport, to the growing irritation of their friends.

Anyway, it’s not as if anyone surrounding them is much better. What matters for nearly everyone in Sick of Myself is not truth but perception, whether it’s Signe’s drug dealer (Steinar Kloumann Hallert) asking her to hang out so his mom can see he has friends, or an “inclusive” modeling agent (Andrea Bræin Hovig) making clear that she doesn’t care if her clients are healthy, only that she won’t be held legally responsible if they aren’t. At times, Sick of Myself struggles to fully wrap its arms around such a big topic, and its efforts to connect Signe’s pathology with a larger societal one feel too broad to cut as deeply as they could.

But it nails the way this idea works on a personal level, in details like the logos that adorn its characters’ clothing: Sorbonne, Paris Fashion Week, Festival de Cannes. Whether they’ve actually attended any of those, or in what capacity, is beyond the point. The idea is just to suggest to everyone else that they have.

And who hasn’t been guilty of that, really? Sick of Myself‘s humor stems from the dawning realization that though Signe’s choices stem from instincts that are, on some shameful level that most of us would rather keep hidden from others, deeply relatable. True, few people would even think of making themselves sick for attention, as Signe does. But who hasn’t imagined the crowds of mourners at our own funerals in a moment of self-pity? Who hasn’t juiced an anecdote to make oneself sound better, or shown off a minor injury hoping someone would think to ask about it? (If you can sincerely say you’ve done none of those things, I congratulate you on being a much better person than I am.)

The difference is that Borgli, and Signe, take things a step further than any reasonable person would, and then several steps further still. Signe doesn’t just lie at a stuffy dinner for Thomas that she has a deadly nut allergy (taking care, of course, to reassure others with false humility that “I try not to let it run my life”). She fakes a reaction, bravely bounces back from it, and then fakes an even more severe reaction as Thomas delivers a toast. The lie gets funnier every time she raises the stakes, especially with Thorp leaning into the physical comedy of Signe simply collapsing on the table, and has provoked full-on giggles by the time the guests are reacting with disgust as he tries to finish his speech over the sound of her coughs.

Yet even Signe’s reality pales in comparisons to her dreams — which Sick of Myself dips into without warning, so that it’s often not clear until things are going too well for her that what we’re watching is a dream. It’s plausible she might write a book about her experiences, say, but clearly untrue that a conceited Thomas would ever admit to being “pissed off” about how good it is. In a few spare moments, her musings betray hints of anxiety and self-awareness. The scarring and swelling caused by her drugs, already gross and getting grosser in waking life (Izzi Galindo designed the prosthetics), putrefy until she’s sticking to surfaces. A doctor (The Worst Person in the World‘s Anders Danielsen Lie) calmly diagnoses Signe with not only drug abuse but dishonesty, a bad personality, a bad sense of humor, and “not [being] the coolest person at parties.”

But it is in one of Signe’s wildest fantasies that Sick of Myself hits on something that feels, unlike so much else in her life, completely true. Signe imagines herself as having written a bestselling novel about her experience of making herself sick, and the raves that follow. “It’s a sign of the times,” one reader gushes. Signe may have an outsized perception of her own significance, and a breathtaking willingness to do whatever it takes to make sure everyone else sees it too. But she’s not wrong that her story feels like a reflection of our current image-obsessed era. To the contrary — that’s what makes it such a vicious little treat to enjoy.