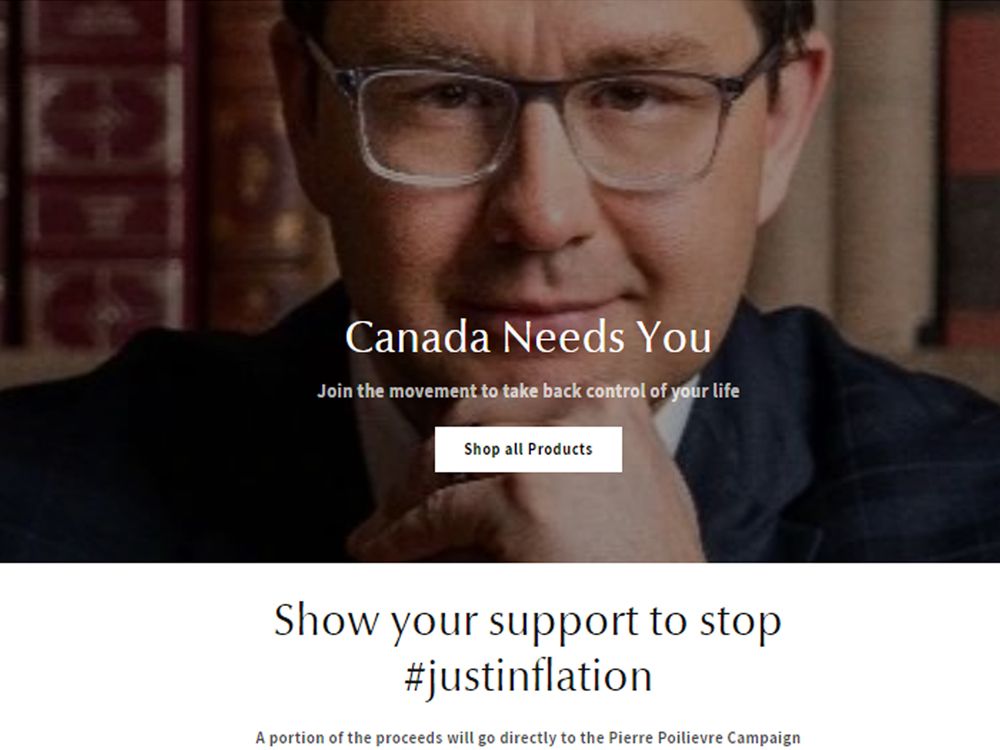 OTTAWA — Attempts to cash in on the Conservative leadership campaign is proving a hard sell for Pierre Poilievre officials, who vow to clamp down on a “misleading” website parading as an official shop selling items like “F–k Trudeau” sweatshirts or Justin Trudeau blackface stickers.

The site, which online records indicate came online late last month, is clearly designed to mislead potential Poilievre supporters with promises to donate an unspecified portion of sales to the candidate’s coffers, with no indication at any point that it is not related to the campaign.

The site also appears as a top result on Google when searching “Pierre Poilievre shop” or “Pierre Poilievre store” and, contrary to other unofficial websites supporting the candidate, has no indication that it is not affiliated with the Conservative MP.

“Join the movement to take back control of your life!,” reads the website’s descriptive blurb on Google, repeating one of the candidate’s recurring campaign slogans.

Online archive services suggest the store’s Shopify account was created on April 16, the same day the website’s URL was registered.

Five days later the website and online store went live, greeting visitors with a still image from a Poilievre campaign Youtube video underneath the text “Canada needs you,” urging visitors to “join the movement” in order to “take back control” of their lives.

In a statement, Poilievre spokesman Anthony Koch said the campaign was only made aware of the merchant’s website after National Post inquired about it on Friday.

“We are not familiar with this website and it is not linked to our campaign,” Koch said.

In a separate statement, the Conservative’s Leadership Election Organizing Committee (LEOC) confirmed that it had contacted the Poilievre campaign about the website.

“They advise that this is NOT their website, and they intend to take action against those responsible,” said Conservative party executive director Wayne Benson.

The Poilievre campaign later confirmed that it was trying to find who was behind the website and if it had a way to have it shut down.

By early Friday evening the website had been removed, replaced with an error message that the store wasn’t available.

The site, designed from a preexisting template with a Tory-inspired blue and white colour scheme, lacks any association or endorsement disclosure with either the Conservative Party of Canada or the Poilievre leadership campaign.

No proprietor or contact information is apparent on the site, asking visitors to show their support to “stop #justinflation,” and promising a portion of the proceeds “will go directly to the Pierre Poilievre Campaign.”

It is not linked to our campaign

The shop’s proprietor also appears to operate a Twitter account — featuring links to the store and its same video still of Poilievre as its profile shot.

All of the month-old account’s 54 tweets were made between April 21 and 22, consisting almost entirely of replies to politically related tweets containing photoshopped images of WWE professional wrestlers Matt and Jeff Hardy, their faces replaced with Trudeau’s and U.S. President Joe Biden’s.

References to the World Economic Forum were also inserted over the pair’s tag team championship belts.

The Poilievre campaign also noted it could not say if whoever is behind the online shop had donated any proceeds to Poilievre because as of Friday, it did not know who is behind it.

Canadian election financing laws don’t allow companies to donate to federal campaigns, meaning it is highly unlikely that an eventual donation to Poilievre’s campaign from the shop’s backers would show up under the website name.

But Koch said the campaign will refuse any of donations from any individuals found to be behind the online shop.

“Our campaign is going to be rejecting any and all donations from the misleading website,” he said.